In the main event of Rizin 33 this Friday, “Roberto Satoshi” faces the resurgent Yusuke Yachi, who has rebounded from a dismal 1-5 run — including a one-sided loss to de Souza last August at Rizin 22 — by winning back-to-back fights to earn a rematch and a title shot. If de Souza emerges with the belt, he will join current atomweight champ Ayaka Hamasaki and former light heavyweight titleholder Jiri Prochazka, who now plies his trade in the Ultimate Fighting Championship, as the only fighters to defend titles since the promotion’s inception six years ago.

That lack of stability is due in part to Rizin’s schedule, which typically consists of just five or six cards a year, as well as its practice of letting its fighters compete in other promotions, but even by the organization’s usual standards, the lightweight division has had a bizarre run. Tofiq Musayev won the Rizin lightweight grand prix two years ago, defeating Patricky Freire in a controversial match marked by “Pitbull” falling out of the ring while defending a takedown, injuring himself. That inauspicious beginning could presumably have been sorted out in a rematch, except that the COVID-19 pandemic hit shortly afterward, and ended up keeping Rizin on the sidelines longer than any other major promotion. Making things even stranger, by the time Rizin was back in action, Musayev’s home country of Azerbaijan was in a shooting war with neighboring Armenia, and the tournament champ was called up to active military service.

It was never entirely clear at the time whether Musayev’s grand prix win had made him the inaugural Rizin lightweight champ, or had simply earned him the right to fight for the title once it was created, but it’s worth noting that as other contenders complained about his absence — including De Souza — they generally spoke of creating an interim title, implying that they thought of him as the lineal champ.

When Musayev finally returned to the ring last June, it was against de Souza, in what the promotion billed as its inaugural lightweight title bout. The Japan-based Brazilian ran through the grand prix champ, notching his third straight finish in under two minutes and certifying himself Rizin’s top 155-pounder. The rest is history — short, weird history, but history nonetheless. This weekend’s main event might mark the first step towards normalcy for Rizin’s strangest division. 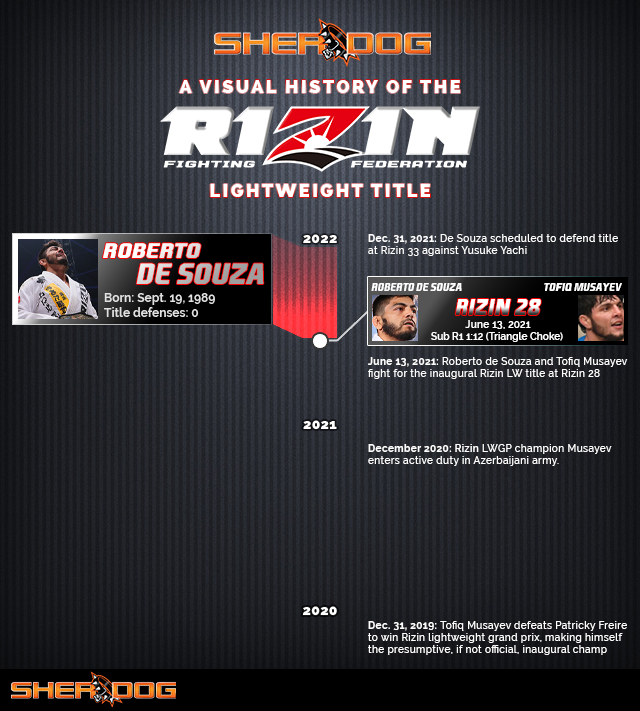