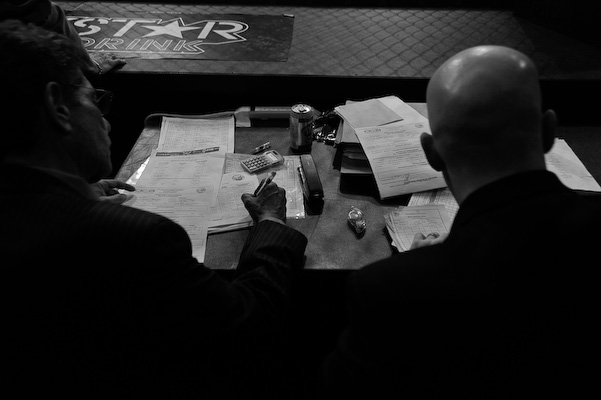 Tuesday's session at the Association of Boxing Commissions’ annual convention was surreal at best and chaotic at worst. A committee of regulators, fighters and referees put in hours and hours of work to come up with a list of modifications to the Unified Rules of MMA and those proposals were whittled down to a smaller set of changes by the medical advisory committee, comprised of some of the top ringside physicians in the country. These changes were set to be voted on Tuesday in Las Vegas.

It seemed like a simple task but if I’ve learned anything over the last seven years I’ve been attending the ABC's annual conference, it's that whenever you get a bunch of regulators in one room, be prepared for the unexpected.

When the voting members were asked if they were ready to call for a motion, California's Executive Officer Andy Foster asked for a 10-minute recess. Apparently, there was some confusion about the language in the scoring criteria and some members believed including the word “damage” in scoring criteria was politically divisive. New Jersey State Athletic Control Board counsel Nick Lembo, who was not in attendance, had issued a statement by email earlier in the day, opposing several particular proposed rule changes, notably the allowance of heel kicks to the kidneys and the changes to the definition of a grounded fighter. Lembo also raised the same concerns about using “damage” in the updated scoring criteria that was packaged with the rule changes.

Lembo’s absence, along with other longtime ABC stalwarts Tim Lueckenhoff of Missouri and Bernie Profato of Ohio, was stunning to me. I’ve been attending this meeting since 2009 and they were the most vocal leaders of this group over that period of time. Crazier and more shocking than that is the fact that they both seem to be integral parts of a new organization, formed in direct competition to the ABC.

Just a little background here before we move on: Lueckenhoff was the president of the Association of Boxing Commissions for 14 years before being forced out due to a new bylaw that mandated term limits for ABC officers. The new rule was passed at the 2013 conference, leaving Lueckenhoff a final two-year term which he was elected to on an unopposed ballot. Mohegan Sun Tribal Commission Director of Athletic Regulation Mike Mazzulli beat out Profato by three votes at last year’s meeting to become Lueckenhoff's successor.

This is why I wasn’t surprised to hear so many commissioners talking about the triumvirate and describing them as having “taken their ball and gone home.” They also denigrated their new association as “the fake ABC” and a “mutiny.” I reached out to the three and as of press time only heard back from Profato. Profato has always been the straightest of shooters and he told me via text that Ohio would look at the new rules and go from there. The next meeting in the state will be on Aug. 9 and the commission will be apprised of the rule proposals and other situations arising from the ABC convention.

Profato did not discuss the new association formed to oppose the ABC, other than to say, “Like other sports having more than [one] organization could be a benefit where there are more than one proposal for state and tribal commissions to evaluate and propose to their state legislators to pass.”

So, back to today’s proceedings.

After the recess and the amending of the “damage” language, there was an impassioned case made against the new rules from New Jersey's representative to the conference, deputy commissioner Rhonda Uttley-Herring. Her address characterized the modifications to the rules as less safe for fighters and was largely panned, leading to former MMA legend Randy Couture verbally dressing her down, saying she was “misinformed.” There was a palpable tension in the Monte Carlo Ballroom with Uttley-Herring standing her ground against everyone else in the venue.

The vote came down immediately after the recess. As the roll was read, yea after yea after yea rang out, with only New Jersey objecting, while Tennessee and Mississippi abstained. It was passed by a margin of 42-1.

And now, the real fun part.

None of the commissions are legally bound to adopt the new rules. Profato told me that he doesn’t believe Ohio’s commission will use all of the new regulations and Lembo asserted in his statement that New Jersey would not implement the rules they disagreed with, which Uttley-Herring reiterated to MMAFighting’s Marc Raimondi.

MMA, which has generally followed the same set of rules since athletic commissions began regulating the sport 15 years ago, now faces the likely proposition of certain states having different rules. For a promoter like the UFC that has been a vocal proponent of a single rule set for the whole sport, this creates a problem and Bellator MMA is in the same boat as well; both promotions had representatives at the meeting and it will be interesting to see what the sport's top two companies do if there are states running shows without the ABC recommended rules.

California and Nevada, the two most prominent commissions in the ABC, both seem poised to utilize the new rules. Foster was the man who raised the motion and chairs the ABC’s medical committee, while Bob Bennett, the Nevada Executive Officer, was one of the members to second the motion.

This story is going to continue to unfold and it may get uglier before it gets better. There is quite a bit of animosity between colleagues who feel betrayed and others who feel abandoned.

One thing that Mazzulli, the ABC's president, stressed when I spoke with him after the vote was that these changes, according to the ABC's medical experts, would not make the sport any more or less dangerous. The changes were proposed to further unify MMA's rules across commissions while clarifying a couple of problem areas, such as the definition a grounded fighter and scoring criteria.

“The Association of Boxing Commissions advanced the sport by adopting several practical changes,” Foster told me. “These changes will serve to clarify officiating, such as the definition of a grounded opponent, the scoring of mixed martial arts, and, in the case of the extended fingers rule, will serve to enhance fighter safety while not taking any excitement away from the sport.”

Sherdog.com Executive Editor Greg Savage can be reached by email or via Twitter @TheSavageTruth.
<h2>Fight Finder</h2>
Sponsored by