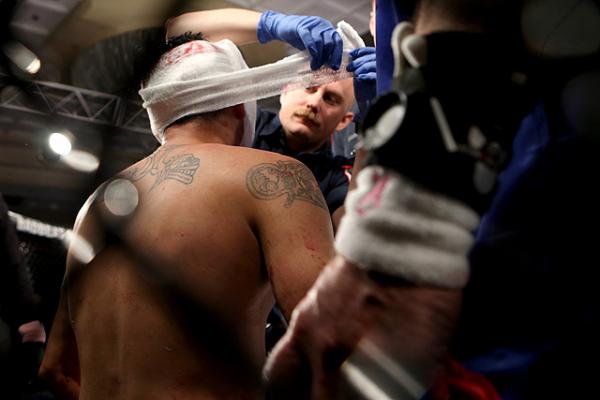 On the day before Mother’s Day, the Ultimate Fighting Championship staged UFC Fight Night “Brown vs. Silva” at the U.S. Bank Arena in Cincinnati. Despite ample opportunity, no fighter walked out to 2Pac’s “Dear Mama,” Danzig’s “Mother” or even the perfectly crafted choice of LL Cool J’s “Mama Said Knock You Out” on Saturday in the Queen City. In the main event, welterweight contender Matt Brown put on a performance in the cage that would have made MMA moms everywhere proud.

Fighting in his home state, Brown came into the bout on the longest winning streak of his nine-year professional career. Not lacking confidence, with five stoppages in his last six outings, Brown picked California hard rock band Avenged Sevenfold for his walkout anthem. Riding a six-fight winning streak, Brown marched to the cage to the title track off Avenged Sevenfold’s sixth studio album, “Hail to the King.”

Having alternated wins and losses for the duration of his UFC career, Brazilian Erick Silva looked to make it two in a row inside the Octagon. Less than three months removed from his most recent Octagon appearance, Silva countered Brown’s heavy metal musical tastes with a hip hop instrumental track. Producer Jorge Quintero’s song, “300 Violin Orchestra,” remains a popular walkout choice for Brazilian mixed martial artists despite being released to little fanfare in 2008. UFC fighters Vitor Belfort and Cezar Ferreira are among the handful of Brazilian exports that use the Quintero track to get in the zone.

When the bell for round one sounded, Brown and Silva put together a frantic five-minute jumble of MMA offense. The opening stanza saw the two welterweights batter one another in what will go down as contender for “Round of the Year.” After Brown battled back from body shots and nearly being choked, the Ohioan pummeled Silva with a high volume of strikes for the next two rounds.

Midway way through round three, Brown finally put down the former Jungle Fight champion for good. The official result was a technical knockout for Brown, who repeatedly hit a grounded Silva with punches to the body and head. After Brown’s seventh straight win, UFC matchmakers should all hail “The Immortal” and his viewer-friendly style of attacking opponents.

Coming off losses and with their backs against the wall, middleweights Costas Philippou and Lorenz Larkin came out swinging the moment they walked through the entrance curtain.

With seven knockouts to his credit, it would not be a stretch to say Philippou has dynamite in his hands. Five months after the most decisive loss of his career, Philippou needed a bounce-back win accompanied by an upbeat song. A hardcore New York head banger in the 1980s, Philippou walked out to Twisted Sister in his most recent appearance but elected to go with the chants of AC/DC’s “T.N.T” ahead of his co-main event with Larkin.

Sometimes bad means good. The killer horns and vintage yells of James Brown on his 1971 jam, “Super Bad,” normally bring nothing but good vibes for a fighter who walks out to it. In need of a win, California middleweight Larkin shook and shimmed his way out to “Super Bad” in hopes of super good in-cage results.

In a nearly four-minute firefight, Philippou got the best of Larkin. Set to detonate after some early Larkin offense, the 34-year-old Philippou eventually trapped his opponent against the fence. An explosion in the form of a 1-2 boxing combo started with a Philippou left hand and ended with a right hand that dropped Larkin face first on the mat for a no-doubt knockout. The win keeps Philippou off the UFC’s cut list and allows him the security to continue to drop bombs inside the Octagon.

On the undercard, more UFC fighters trotted out early Father’s Day tributes with their walkout selections. Australian heavyweight Soa Palelei went country with his musical tastes. It was more of slow dance pick, but Josh Turner’s “Your Man” put Palelei in position to move to 3-1 inside the UFC’s heavyweight division. He knocked out South African newcomer Ruan Potts with punches from the mount.

Lynyrd Skynyrd’s “Simple Man” begins with the lyrics, “Mama told me, when I was young ...” In MMA, moms prefer a simplified in-cage game plan: Fight to your strengths and hide your weaknesses. Middleweight Ed Herman kept it simple against Rafael Natal, resulting in a three-round decision win for “The Ultimate Fighter 3” finalist.