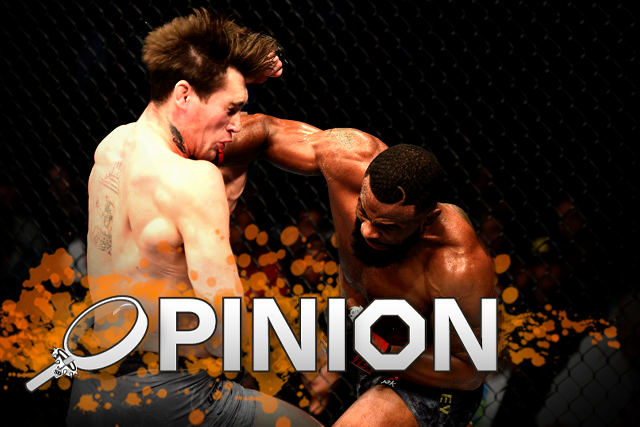 In honor of Tyron Woodley's foray into professional boxing against Jake Paul, a nice payday and fun freakshow fight, let's look at a largely ignored aspect of his MMA career. Much has been written about Woodley's prickly personality, his conflicts with Ultimate Fighting Championship President Dana White, how he would fare against Georges St. Pierre, or his position in the hierarchy of all-time great welterweights. However, the most interesting aspect of Woodley was his fighting style. And by that, I don't mean it was unique. Far from it! There were many fighters who used the exact same approach. However, Woodley's style was anachronistic at the same time that it was highly successful, an exceptionally rare combination. Put more plainly, this was a man who was UFC welterweight champion in 2019 with a fighting style straight out of 2009!

In the late 2000s, a new breed of MMA wrestler had evolved. While they were as physically powerful and capable of taking the opponent down as ever, they had also learned boxing and were notable for a deadly cross. Thus, they presented their opponents with a difficult choice: Focus on defending the takedown and they would nail you with a straight right (or straight left if they were a southpaw); worry too much about the cross and they would take you down. Examples of this archetype include a young Ryan Bader, Rashad Evans, and Johny Hendricks. To be sure, there was some variance here. Some of those fighters could also throw powerful kicks, had solid defense or possessed devastating ground-and-pound. The fundamental template was the same, however, and for a while it seemed like the best one. But as with anything in the fighting arts, there is always a counter. Practitioners who didn't change much, like Evans and Hendricks, were largely washed-up by 2016, earlier than one would expect given their ages, as opponents evolved and improved. Those that had lasting success, like Bader, changed considerably themselves.

All except for one man. Woodley kept that same style for his entire career, and was not only an elite fighter, but the UFC welterweight champion as 2019 began. It was simple and effective. Throw some powerful leg kicks. Keep opponents honest with the double-leg shot. And if they got too greedy, especially coming forward, blast them with a beautiful pull-back right cross. Above all, be patient and don't force matters.

Woodley was so good that he defeated unique, more evolved opponents like Stephen Thompson and Darren Till through this approach. He was a true throwback, a living reminder of how top guys fought over a decade ago. Related to this, we can also make several observations.

Woodley was the ultimate example of this particular fighting style.


Looking at his longevity, level of success and the skills he displayed in the cage, it's no contest. Woodley represented the best and highest level of this archaic style. To surpass him meant developing a better, newer fighting style.


I've always marveled that despite their differences outside the cage, Usman and Covington fight so similarly inside of it. In fact, they represent the same essential style. They're great grapplers with tremendous cardio who can chain-wrestle forever and are masters of wrestling against the cage, always holding that weapon in their back pocket, but who have developed impressive, advanced kickboxing, throwing a variety of technical strikes, firing off crisp combinations, and using kicks far more effectively than just the occasional blow to the legs.

In many ways, it's a more advanced version of Woodley's older style, and thus, it was little surprise that Usman and Covington dominated him so badly. People argue that Woodley would have done better in his physical prime, and while I agree, I still see him losing decisively to the versions of Usman and Covington he faced. While Woodley was looking for a single punch, Usman and Covington were throwing multiple one. And rather than just the cross, they both possessed other punches one had to watch out for. For instance, both had better jabs than Woodley did. Usman used a front kick to the body to great effect in his spectacular victory against Covington, and one fight later, Colby was using it in devastating fashion against Woodley. While Woodley's wrestling ability declined over the years, as all skills do with enough time, he never had the mastery of wrestling against the cage or incorporating it with striking the way his two younger foes did, which is why both of them took him down.

There is no shame in any of this. Woodley was about to turn 37 before the Usman fight. It took a great fighter with a cutting-edge style in his prime to dethrone him.


I've mentioned before my lack of interest in “greatest of all time” discussions. Royce Gracie in his prime would be crushed like a bug by any modern Top 50 lightweight or featherweight. That doesn't mean that Pat Sabatini or Christos Giagos are greater than the UFC 1, 2 and 4 winner. St. Pierre was much greater for his time than Woodley was for his, but in an actual match-up between the best version of each, I favor Woodley. In my opinion and that of literally every media member and most fans, Hendricks defeated St. Pierre. Woodley represented the best version of Hendricks' style, so it's logical that he would also defeat the French-Canadian legend, even if one believes St. Pierre was slightly past his prime against Hendricks.

One lingering question for readers may be whether Woodley could have evolved his fighting style, as Bader has done. The big difference between the two is that Woodley never had to, until it was too late. While Bader never quite captured gold in the UFC, forcing him to go back to the drawing board and change, Woodley was champion for almost three years by perfecting his particular approach. He was a month shy of his 37th birthday when Usman thoroughly trounced him, and by then, it was too late.

Making matters even more difficult is that Woodley is short for a modern welterweight, with exceptionally large muscles. That's a recipe for being a one-shot sniper, not firing off multi-punch combinations. So not only would Woodley have to learn new skills, he would have had to change his body. When looking back at the career of “The Chosen One,” one shouldn't judge him too harshly for losing four in a row at the end to great opposition. Rather, marvel at how long he stayed champion while using an old-school fighting style that he perfected.
« Previous Fight Facts: UFC on ESPN 30 Next Amanda Nunes-Julianna Pena Bantamweight Title Tilt Rescheduled for UFC 269 »