The wait is over.

After claiming the undisputed Ultimate Fighting Championship heavyweight belt against Cain Velasquez in June, Fabricio Werdum was set to rematch the man he beat for the title at UFC 196 in February. When Velasquez was forced to pull out with an injury, Stipe Miocic was chosen as a late replacement, yet the matchup was postponed once Werdum pulled out with a back injury. Now, all the pieces have fallen in to place, and Werdum will fight Miocic at UFC 198 this Saturday in his native country of Brazil. “Vai Cavalo” will be defending his belt for the first time, as well as fighting for the first time this year. He has won six fights in a row, and he has not lost in the UFC since 2008.

In the opposite corner, Ohio-native Miocic will look to extend his two-fight winning streak and notch what would easily be the biggest victory of his career. He was last seen in January at UFC 195, where he dusted former UFC champ Andrei Arlovski in under a minute. Prior to that, he put a world-class drubbing on the resurgent Mark Hunt in May 2015, smashing the 2001 K-1 World Grand Prix winner for four and a half rounds before he found the TKO win. Since debuting in the UFC in 2011, the part-time firefighter has steadily built one of the best resumes in the heavyweight division.

Let us see what the Tale of the Tape has to say about the matchup: 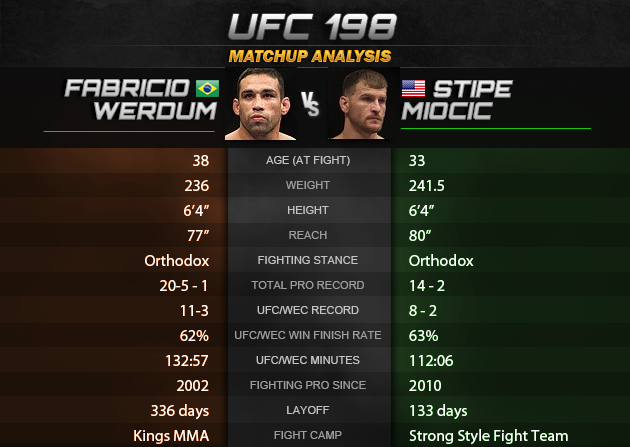 Judging purely on anthropometric stats, Miocic is a slightly heavier man with a non-negligible reach advantage. Factoring in the age difference, and that edge sharpens. At 38 years old, it is only a matter of time until Werdum’s 14 years of professional fighting start to catch up to him. In all fairness, he has not shown any signs of slowing down in the cage yet, though the back injury does little to inspire confidence in that regard. On the other hand, the 33-year-old Miocic is in his physical prime. Since neither of them is spectacular in terms of pure athleticism, you have to give the physical advantage to the larger, longer, younger man.

At the same time, experience is something that cannot be so easily quantified, and Werdum wins that category by a landslide. He has fought professionally for eight more years than Miocic, and he has been in the big leagues all over the world for the majority of that tenure. Werdum has more fights in the UFC, Pride Fighting Championships and Strikeforce than Miocic has in his entire career, and Werdum has indisputably faced -- and defeated -- better opponents. On top of that, Werdum trains with what is arguably the best camp in the world: Kings MMA. Strong Style Fight Team is reputable and by no means a knock against Miocic, but given Werdum’s wealth of experience and Rafael Cordeiro’s tutelage, it is hard to compare the two.

The final stat to note is the layoff. This also leans in favor of Miocic, who was fighting fit in January and left unscathed, whereas Werdum is coming off an injury and has not fought in nearly a year. Thus, there are a number of X-factors at play.

Let us see what the striking numbers have to say: 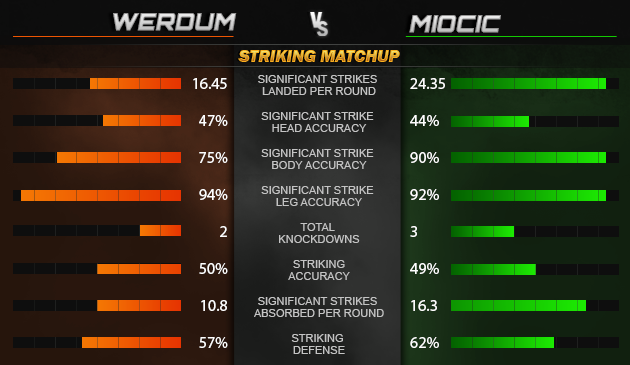 It is notable that neither Werdum nor Miocic come from a striking base, yet both of them have developed effective standup styles that complement their game.

Werdum is a slightly more accurate striker, and he utilizes a more diverse muay Thai skill set. He predominantly aims for the head, which accounts for 80 percent of his total output, while body shots and leg strikes are split at 10 percent apiece. Similarly, 77 percent of his strikes come at distance, with 14 percent in the clinch and the remaining nine percent to opponents on the ground. Werdum does tend to eat fewer strikes per round; however, that is more of a result of his low output than his defensive prowess.

The numbers are even more lopsided for Miocic: 89 percent of his strikes are aimed at the head, with only five percent to the body and six percent to the legs. Moreover, 78 percent of his strikes come at distance, while the clinch accounts for nine percent and ground strikes for 13 percent. The real crux of his striking is his high output. He lands almost five strikes per minute and throws twice as many. Since this necessitates getting in frequent exchanges on the feet, it is no surprise that he gets punched more often per round than Werdum, but at the same time, his defense is statistically better.

When it comes to power, it is more or less even. On paper, Miocic has the advantage with an extra knockdown and one more knockout in four fewer fights, but he has also fought lesser opponents. Both men come by knockouts by timing hard shots and pouncing on opponents with swift follow-up barrages, as opposed to having one-punch power. However, Werdum has also been knocked down five times, four more than Miocic. Then again, both men have been knocked out only once. The numbers lean toward Miocic but not authoritatively so.

Things should get quite interesting if the fight hits the mat. Here is how the numbers play out in the ground game: 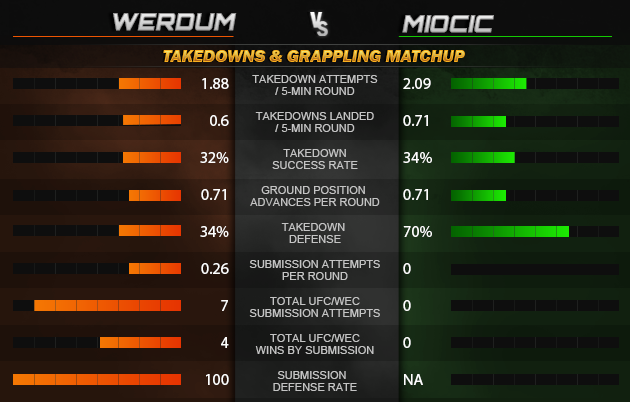 Both men are accomplished grapplers in their own rights, but they come from different disciplines and have attained varying levels of success in and out of MMA.

Werdum is widely recognized as one of the premier jiu-jitsu practitioners in the world, and he has applied those skills seamlessly into MMA. Aside from an errant bout with Alistair Overeem, he has elicited a tap from everyone he has attempted to submit, and he is dangerous on top and on his back. Naturally, Werdum has never been submitted in MMA competition. He has made improvements to his wrestling, but he is still not much of a takedown threat. He has never finished more than half of his takedowns in any fight, and he does not attempt them more than once or twice per round on average. His takedown defense is not very good; everyone who has attempted more than one takedown against Werdum has succeeded in taking him to the mat, though his submission chops have likely deterred a lot of opponents from attempting any.

Miocic, on the other hand, has never so much as attempted a submission in the UFC, nor has he ever had to defend one. He comes from a Division I wrestling background, and while he did not accomplish much of note in college -- he focused on baseball instead -- he has a well-respected game. He attempts a takedown every few minutes, though he does not complete them often. However, one fight in particular weighs down that percentage; against Junior dos Santos, he went 1-for-18, which accounts for 41 percent of all of his takedown attempts in the UFC. Outside of that fight, his completion rate is 54 percent. His takedown defense is also solid, though it is worth mentioning that everyone who has tried to take him down has been successful, save for Roy Nelson.

It is ill-advised for anyone to humor Werdum on the mat, but it will be interesting to see how the wrestling chops of Miocic hold up against the submission savvy of the Brazilian.


As it stands, the incumbent champion is a narrow favorite, hovering around -160 to -175. Miocic is a slight underdog in the +130 to +145 range. In a weight class that has been gridlocked for years due to injuries, it is exciting to see one of the younger heavyweight talents get a crack at the title. For Werdum, who has now submitted arguably the three greatest heavyweights of all-time, this is an important fight to cement his legacy as one of the top one or two heavyweights ever. For Miocic, this is his big break to emerge from a good heavyweight to potentially something more. This will be the first heavyweight championship fight to take place without Cain Velasquez since 2012, making it a legitimately compelling headliner. Will Werdum fortify his position as an all-time great or will there be a new face for the division?