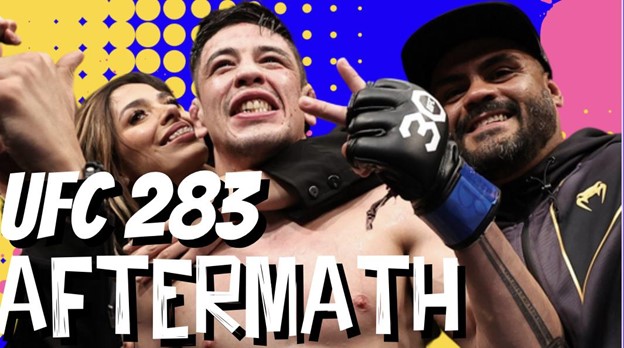 
UFC 283 has come and gone and blessed us with the first pay per view event of 2023. The card satiates us for the two-week layoff before the upcoming late-night Feb. 4 event. We were treated to some decent fights in what was a Brazilian rout until the title fights. Many were introduced to the Bonfim brothers for the first time. Gilbert Burns reminded everyone what he’s like on the ground. To cap off the night, we saw the beginning of a new era at light heavyweight when Jamahal Hill dominated Glover Teixeira. But today, we are here to talk about the fourth and final fight of the rivalry between Brandon Moreno and Deiveson Figueiredo. It’s Aftermath time for UFC 283.


In UFC 283 Beforemath, we broke down the first three Moreno-Figueiredo fights in detail. After losing his belt, Figueiredo won his title back last year and had intended to win at UFC 283, then move up to bantamweight. The weight cut was simply too much for him and his body couldn’t respond like it did when he was young and spry. But that weight cut bug, which cost Figueiredo the title in his first fight with Joseph Benavidez, reared its ugly head again and Figueiredo was, for the second time, finished by Moreno, the true flyweight champion.

Figueiredo struggled with Moreno forcing him to lead the dance and not get into wild exchanges in the pocket with Figueiredo. The champ came out in this fight with similar stance from the third fight. Figueiredo struggled with Moreno getting to the body which wore on his cardio from the first fight and decided to work more from at range in the third. That worked well from him as he caused Moreno to get out of position and take advantage of that when his adversary would be in the pocket.

This fight was one of patience and the inability to deal with that patience from Moreno on Figueiredo’s part. Throughout the entirety of the fight, Figueiredo struggled with Moreno’s newfound patience and when forced to lead, often found himself countered.

To be quite honest, Figueiredo was almost shut out of the fourth fight at UFC 283 except for the second round where he had the takedown. Moreno was caught throwing a naked low kick and Figueiredo caught the kick and got into Moreno’s guard where he didn’t get off much damage of consequence.

Unfortunately for Figueiredo, Moreno was game on the ground, as we’ve seen on the previous three bouts between these two fighters. Moreno did well to come up on a single leg and get out of the grappling exchange and left Figueiredo for worse despite him winning the round. After Moreno escaped, Figueiredo looked tired and was whiffing at the end of the second round.

Figueiredo came out in Round 3 and tried to push forward and back Moreno to the cage and wouldn’t throw first and wouldn’t shoot a takedown. There, Moreno had no reason to go first and could hang out there until he found a strike he liked. In the end, a big and over extended left landed right to the eye of Figueiredo and it closed up. In between the rounds, the doctor called the fight off and Figueiredo had lost his belt to Moreno for a second time.

After the fight, we got confirmation that Figueiredo had struggled with the weight. But that’s something we have known for a while and should the weight cut be a bit too much, it’s insane how well Figueiredo has fought since then. He’s ready to move to 135, the most stacked division, and there he can reap some havoc and bring his chaotic style to bantamweight.


I like Batman. Batman always has a contingency plan. He can beat Superman with enough prep time. Moreno, a huge Lego fan, channels his inner Lego Batman. After fighting Figueiredo three times, the fourth time was, indeed, the charm.

Figueiredo was chaotic but in the third fight, it was apparent that Moreno was the faster fighter and Figueiredo set out to be more reserved to win his belt back, which of course, he did. But Moreno and his team saw something in the tape study. Moreno came out and didn’t look to go first the entire time. He forced Figueiredo to go first. He wanted Figueiredo, who looks to get his opponents in the pocket and land bombs, to lead the dance and Figueiredo didn’t know what to do as Moreno caught him on the end of the jab the entire night.

Moreno didn’t kick the leg often, nor did he work the body all too much. He was patient and looked to grapple. After choking out Figueiredo in the second fight, Moreno failed to adjust for the third and, instead, made the adjustments from the second fight into the fourth fight.

We have seen in every fight just how great both these fighters are in scrambling situations. There are guard passes, sweeps, and much more cool stuff we were treated to in these four fights. But those scrambles were incredibly fast and the other fighter would often find an opening during the transition. When Moreno got the rear naked choke, Moreno got the figure four lock in to slow down Figueiredo and secure position. In the fourth fight, Moreno did just that and took his time on the ground and tried to secure the position first before passing and attacking. This single-handedly won him this fight with the cardio advantage.


The most exciting moment of the fight came in the second round. Moreno implemented a grappling heavy approach, relatively speaking for Moreno, and used it to slow Figueiredo down. In the figure above, we see Moreno (1) in on the single but Figueiredo has grabbed the whizzer and begun to pull up on Moreno. Moreno would (2) switch to the body lock here and slide that right leg behind Figueiredo to sweep him over the leg and to the ground. Unfortunately for Moreno, the sweep (3) gets him out of position and Figueiredo is able to reverse Moreno in the scramble and (4) get on top. But Moreno has butterfly hooks in, something that both fighters have utilized in all three prior fights. In order to prevent a sweep, Figueiredo has to stand up and get out of the guard. 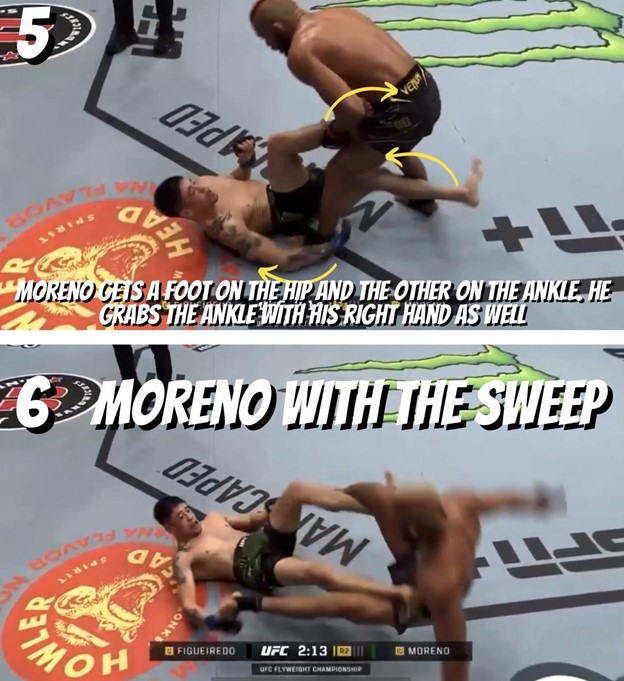 
But Moreno didn’t let Figueiredo secure position in scrambles he either initiated or broke free on. He gave us a throwback to our previous fight scrambles. As he forced Figueiredo to stand up with the threat of a butterfly sweep, Moreno would (1) hook the right ankle of Figueiredo with his foot and grab the left with his hand. He then put his other foot on Figueiredo’s belt and in one fluid motion would pull Figueiredo’s feet from under him and push him back with his other leg at the same time. This sweep is identical to the first fight’s scramble and is a go-to for Moreno. 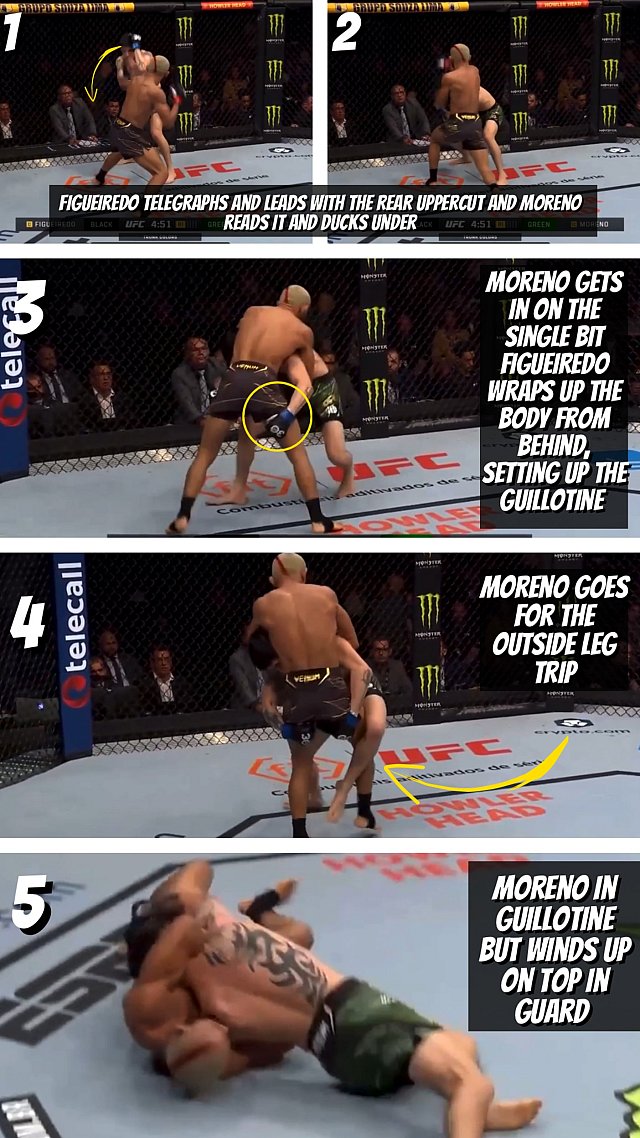 
In fact if we rewind to the very first exchange of the fight, we see that the game plan of Moreno and company was to play offensive grappling slow and be defensive and quick. In the next figure, you can see (1) Figueiredo lead with the rear uppercut now that Moreno is against the fence. (2) Moreno dips to his right and off the center line making the strike miss. This gives Moreno the opportunity to suck under and (3) grab the single leg. But Figueiredo is wise to it and sets up his guillotine and lifts Moreno’s body up to prevent the takedown. To counter this, Moreno (4) wraps his leg to the outside of Figueiredo’s and drives through pushing the champ to the ground. (5) Moreno gets caught in a guillotine but stays safe by not letting Figueiredo move and tighten the choke up. Moreno would take it slow and be content with his top position which completely zapped the cardio of Figueiredo and led directly to the finish.

Moreno and his team also set forth the smart game plan and finally decided to not get caught in the pocket finally. After the first round, Moreno’s team wanted him to stick and move. They pointed out that Moreno was faster and needed to look at the one-two, then get out of the way. 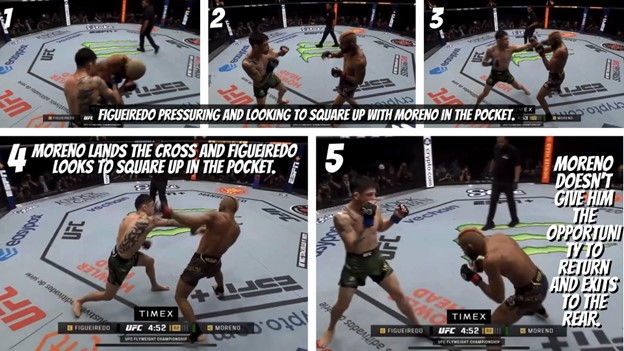 
Moreno did just that coming out in the second round. (1) Figueiredo did what he always does and presses his opponent to the fence and expects Moreno to fire back. Moreno throws but as Figueiredo squares up, (2) Moreno pivots out to his left. Figueiredo, as you can see, is still wanting to score in the pocket and is squared up. You can see that with Figueiredo advancing and square, (3) Moreno steps in with the jab and (4) lands the cross. Now Figueiredo wants his turn to score and Moreno wisely (5) backs out and leaves Figueiredo wondering where his turn to punch has gone.

This was the theme all night. Moreno landed, looked for his counters and stay out of the pocket which allowed him to avoid damage and keep his foot on the gas and win this fight with an authoritative statement.

Now with Figueiredo behind him, Moreno brings us back to his era of flyweight reign. Now, he can start the next chapter. There are some names on the rise, including Alexandre Pantoja, who owns two wins over the new champ. One thing is for sure, Moreno will entertain and that’s what we’re all here for, aren’t we?