Phil Davis (above, file photo) will be served well by the experience gained in his bout with “Minotoro.” | Sherdog.com


UFC Fight Night 24 “Nogueira vs. Davis” brought surprises, along with questions asked and answered, on Saturday at the KeyArena in Seattle.

A closer look at five storylines from the event follows.

Phil Davis had to deal with just about everything an unbeaten fighter could. An opponent switch from Matt Hamill to Antonio Rogerio Nogueira provided a more dangerous fight, along with main-event status for the first time in the UFC.

Fighters may not openly admit to worrying about such things, which is why their managers get a percentage to do exactly that.

After hammering out a unanimous decision win -- oddly, not a single judge gave Nogueira the first round -- Davis created some space between himself and talk of a possible title shot, but in a good way. Here is a fighter with nine overall fights, five in the UFC. A still-developing product, he has a huge upside and plenty of time to add to his arsenal.

Davis’ standup in the bout was confident if not overly effective. He threw some solid kicks, but Nogueira, a canny veteran, was able to adjust to them, landing a few solid counters and forcing Davis to adjust to his adjustment. That is exactly what Davis did, tweaking his timing to eventually get takedowns after several were stuffed in the opening minutes.

In his post-fight interview, Davis mentioned that various injuries had made the camp particularly challenging. If that is the case and he still performed this well, then the win is even more impressive.

It was a positive that he had a tough fight with a little leveling-out of the expectations. During an interview with Sherdog.com in February, he was asked him about them.

“I really am just scratching the surface,” Davis said. “I probably won’t be to my full potential till I’m 30. I have plenty of time.”

This win was better than a quick one -- unlikely given Nogueira’s durability, but all the more impressive if it had happened. If one looks at the progress of most fighters that earn title shots, most endure a distance-going bout from which they grow and look better afterwards. It is part of the process, and Davis, like any other fighter, deserves the chance to progress ahead at his own pace.

It is a funny quirk of fan interaction, unique to MMA: when one side uses tactics to dominate the action and run out the clock when well ahead, fans blame the guy doing it. Yet in football or basketball, nobody in their right mind would demand a team slowing down the pace to protect a lead change tactics merely to add excitement. 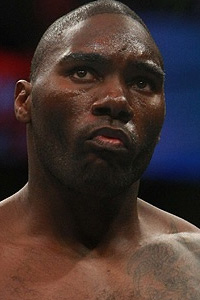 Anthony Johnson file photo
Johnson fought conservative.
Yes, Anthony Johnson was not his normal, ultra-violent self in decisioning Dan Hardy, but he did utilize some excellent tools that have been underused -- namely, his big-time takedowns and top control. By wrestling the heavy-handed Hardy, Johnson’s refusal to enter into a slugging match virtually eliminated the chance of defeat.

Moving forward, this win serves notice to other welterweights that he will be a threat in that area, as well. If he can make 170 pounds comfortably and bring a full gas tank into the ring, Johnson is going to be tough to beat for any welterweight. The real question is how he will be able to keep pace against fighters who can take him down.

Currently in the division, there are only a few contenders that would be likely to do so, given his size and dangerous power on the feet. Johnson may not have wowed the crowd, but he dominated in a fashion that other fighters definitely noticed.

Even a ‘Korean Zombie’ Can Learn New Tricks

Chan Sung Jung’s win over Leonard Garcia was inspiring, if for no other reason than few fighters have burst upon the scene so quickly and then had a precipitous drop off. Jung’s first fight with Garcia in April was an unforgettable war, one he lost via split decision but one through which he gained big-time respect.

Knocked out by a head kick from George Roop in his next bout at WEC 51, “The Korean Zombie” disappeared for nearly six months. It seemed a cruel trick of fate. Surely, a fighter this game and exciting would not be relegated as a one-hit-wonder.

Thankfully, the Zombie merely needed to make a few adjustments. Recent training with Team Alpha Male showed that a switch in camps almost always helps, and he used a revamped striking game and imposing wrestling to dominate Garcia.

In unleashing the first twister submission in the history of the UFC, Jung is definitely back on the radar.

Five fights were streamed on the UFC Facebook page for Saturday’s show, which was a huge win for fans and a clever, muscular marketing move by Zuffa.

One does not need to be Alvin Toffler to know that the television and the computer will eventually merge into one unit; in the future, people will probably find it quaint that we differentiated between the two.

McDonald a Bantamweight to Watch

Thanks to a string of impressive performances, we can now read and hear his name without thinking of the former lead singer of The Doobie Brothers. Michael McDonald is a talented, well-rounded 135-pounder and has some impressive wins over tough customers. He split two fights with Cole Escovedo, winning the second one via knockout, and stopped Manny Tapia with punches, as well. Now 2-0 in the big show, his gutty win over previously unbeaten Edwin Figueroa came in a rousing bout at UFC Fight Night 24.

Both guys kept battling to the end, and Figueroa acquitted himself well despite the decision loss, fighting hard throughout.

The UFC’s first bantamweight title fight is now set for UFC 132 in July, as Dominick Cruz will defend his belt against Urijah Faber. That is a great fight, and after Cruz-Faber 2 is settled, they will need exciting contenders to move the divisional plotlines along. McDonald has earned a place with his aggression and exciting style.