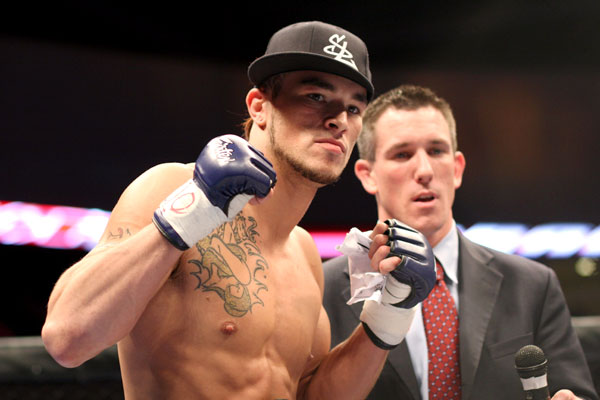 
Brandon Thatch prefers to let his skills do the talking.

The once-beaten Thatch will put his nine-fight winning streak on the line when he confronts X-Gym’s Paulo Thiago in a welterweight showcase at UFC Fight Night 32 “Belfort vs. Henderson” on Saturday at the Goiania Arena in Goiania, Brazil. The 28-year-old has finished all nine of his foes during his current tear, five of them in less than a minute.

Thatch made his Ultimate Fighting Championship debut at UFC Fight Night 27 in August, when he needed just 83 seconds to dispatch Justin Edwards at the Bankers Life Fieldhouse in Indianapolis.

“I feel like I’m just getting in the door,” he told Sherdog.com. “I’m just grateful to be here right now. I’m going to let my actions dictate where I go. He’s not scared to bang at all. I like to throw. He’s great on the ground. My wrestling is improving. It’s going to match up really well for the fans.”

Thiago poses a legitimate threat. The 32-year-old former Jungle Fight champion last appeared at UFC on FX 8 in May, when he captured a unanimous decision and halted a streak of 16 straight wins by the previously unbeaten Michel Richard Cunha dos Prazeres at the Arena Jaragua in Jaragua do Sul, Brazil. Thiago, a Brazilian jiu-jitsu black belt who burst on the international scene with a stunning knockout against Josh Koscheck in 2009, has been finished only once in 20 professional outings.

“He’s a tough dude, very, very reputable,” Thatch said. “I’m kind of excited for him and me to get together and make some fireworks. I know he’s going to bring out the best in me, for sure.”

Thatch, who has trained with UFC welterweight champion Georges St. Pierre in the past, operates out of the Elevation Fight Team camp in Colorado. He hopes the experience of having his first UFC bout under his belt will benefit him as he ventures into hostile territory.

“Getting those butterflies and getting that first one out of the way -- it feels really good,” he said. “I feel like there’s a weight lifted off my shoulders, and now it’s just time for me to perform. I still feel like a racecar that hasn’t driven to the red line yet. Every fighter’s dream is to lace up the UFC gloves, and I got to, so now it’s on to the next dream.” 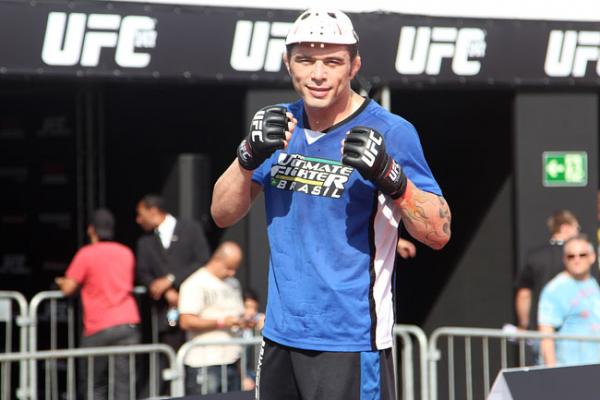 Photo: Gleidson Venga
“Jason” is 3-0 in the UFC.
“The Ultimate Fighter: Brazil” Season 1 winner Rony Mariano Bezerra’s climb on the featherweight ladder has brought him to the rung upon which Jeremy Stephens rests.

The 29-year-old Team Nogueira export will challenge Stephens in a featured clash at 145 pounds, as he aims to maintain his perfect UFC record while extending a personal-best eight-fight winning streak. Bezerra has delivered 12 of his 13 career wins by knockout, technical knockout or submission. He last competed at UFC on Fuel TV 10 in June, when he submitted Mike Wilkinson with a first-round triangle choke at the Paulo Sarasate Gymnasium in Fortaleza, Brazil.

Stephens made his first appearance as a featherweight in May, when he cruised to a unanimous decision against Arizona Combat Sports representative Estevan Payan at UFC 160.

“I think he’s an experienced guy in the UFC and a dangerous one, but I want to keep my undefeated record in the UFC intact and realize my dream of becoming champion,” Bezerra said. “I’m anxious to see how it is to fight a guy with more experience.”


Vitor Belfort and Dan Henderson made their professional MMA debuts eight months apart, Belfort at a SuperBrawl event in October 1996 and Henderson at a Brazil Open Fight show in June 1997 ... Cezar Ferreira lists Brazilian racecar driver Ayrton Senna as one of his heroes. The three-time Formula One world champion was killed at the San Marino Grand Prix on May 1, 1994, when “Mutante” was 9 years old ... Former Ring of Combat champion Ryan LaFlare earned a Bachelor’s degree in business management at Farmingdale State College in East Farmingdale, N.Y. ... Rafael Cavalcante is one of six men to have held the Strikeforce light heavyweight crown, along with Henderson, Muhammed Lawal, Gegard Mousasi, Renato Sobral and Bobby Southworth ... When Daron Cruickshank was born on June 11, 1985, the top five songs on the Billboard Hot 100 were “Everybody Wants to Rule the World” (Tears For Fears), “Everything She Wants” (Wham!), “Axel F” (Harold Faltermeyer), “Suddenly” (Billy Ocean) and “Heaven” (Bryan Adams) ... Undefeated Russian newcomer Omari Akhmedov was a two-time national champion in pankration ... Renovacao Fight Team flyweight Jose Maria Tome has enjoyed 12- and 13-fight winning streaks during his career ... By the time Sam Sicilia returns home to Spokane, Wash., from his featherweight clash with Godofredo Castro, he will have traveled more than 9,200 miles ... Thiago Tavares’ bout with Justin Salas will be his first since testing positive for steroids following his January knockout loss to Khabib Nurmagomedov.