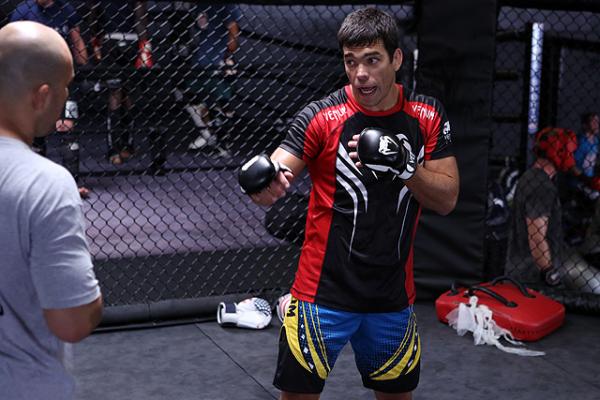 Lyoto Machida seems to like his new surroundings at 185 pounds. | Photo: Dave Mandel/Sherdog.com


Four of MMA’s top middleweights will be on public display when the Ultimate Fighting Championship touches down in Brazil for the first time in 2014.

Machida carries with him a built-in following and one of the sport’s most distinguished resumes. The 35-year-old owns victories over six former UFC champions: Rich Franklin, B.J. Penn, Tito Ortiz, Rashad Evans, Mauricio Rua and Randy Couture. “The Dragon” last appeared at UFC Fight Night 30 in August, when he felled Mark Munoz with a first-round head kick at the Phones 4U Arena in Manchester, England. Machida has compiled a stellar 12-4 mark since arriving in the UFC in February 2007, losing only to Rua, Quinton Jackson, Jon Jones and Phil Davis.

Mousasi made his Octagon debut at UFC on Fuel TV 9 in April, when he dissected an overmatched Ilir Latifi en route to a unanimous decision at the Ericsson Globe Arena in Stockholm, Sweden. The 28-year-old Dutchmen spent the ensuing months recovering from reconstructive knee surgery. A potent and accomplished finisher, Mousasi has delivered 29 of his 34 professional wins by knockout, technical knockout or submission, 26 of them inside one round. Since submitting to an Akihiro Gono armbar under the Pride Fighting Championships banner in August 2006, “The Dreamcatcher” has gone on a 21-1-1 tear and enjoyed high-level success in multiple weight classes.

While the spotlight shines brightest on Machida and Mousasi, plenty of eyes will be on Souza. One of the world’s most celebrated submission grapplers, “Jacare” has showcased a rapidly improving standup attack in recent outings. The 34-year-old has not competed since UFC Fight Night 28 in September, when he stopped Yushin Okami on first-round punches. Souza has finished his last five opponents, four of them in the first round.

The least-heralded of the group, Carmont has a golden opportunity to prove he belongs in the cream-of-the-crop discussion at 185 pounds. The 32-year-old Frenchman has rattled off 11 straight wins, including a takedown-laden decision victory over Costas Philippou at UFC 165 in September. Since joining the UFC roster in late 2011, Carmont has defeated Chris Camozzi, Magnus Cedenblad, Karlos Vemola, Tom Lawlor, Lorenz Larkin and the aforementioned Philippou. None had Souza’s pedigree. 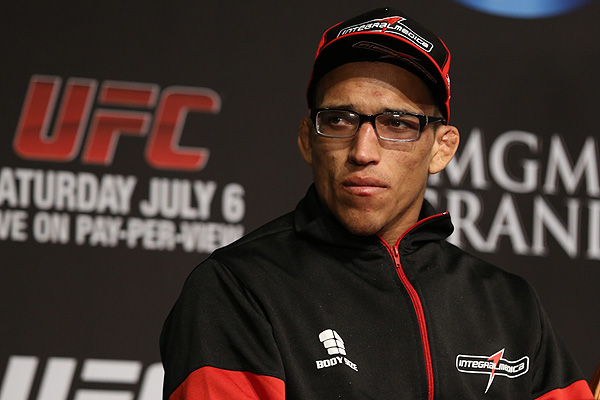 Photo: D. Mandel/Sherdog.com
Oliveira owns 15 finishes.
Charles Oliveira has run quite a gauntlet since he touched down in the UFC, with Darren Elkins, Jim Miller, Nik Lentz, Donald Cerrone, Cub Swanson, Frankie Edgar and a pair of “Ultimate Fighter” winners accounting for eight of his nine fights inside the Octagon.

The promising 24-year-old Brazilian jiu-jitsu black belt hopes to put an end to his current two-fight losing streak when he collides with Andy Ogle in a featherweight showcase at UFC Fight Night 36. Oliveira last competed at UFC 162 in July, when he dropped a unanimous verdict to Edgar at the MGM Grand Garden Arena in Las Vegas. He expects a stern test from the driven and durable Ogle.

“Andy has very good boxing and a big heart,” Oliveira said in his pre-fight interview with UFC.com. “He comes to fight hard, and he will make [it] a very exciting fight.”