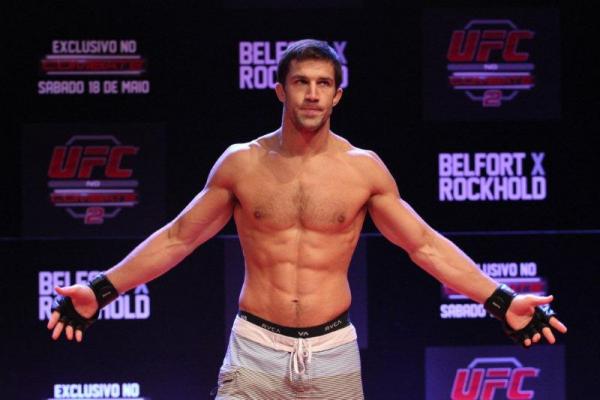 Nine of Luke Rockhold’s 11 bouts have ended inside one round. | Photo: Marcelo Alonso/Sherdog.com


Luke Rockhold has a clear view of the top of the Ultimate Fighting Championship’s middleweight division, even with Vitor Belfort blocking his path.

Rockhold will make his promotional debut against Belfort in the UFC on FX 8 main event on Saturday at the Arena Jaragua in Jaragua do Sul, Brazil. A win over “The Phenom” would almost certainly launch the former Strikeforce champion into the title contender discussion at 185 pounds.

In the weeks leading up to the event, Belfort has become the subject of controversy over his use of testosterone replacement therapy. Rockhold was outspoken in his criticism of the Brazilian and TRT, even suggesting prolonged past steroid usage as a potential cause for Belfort’s low testosterone levels. Even so, Rockhold recognizes the formidable challenge in front of him. Belfort has rattled off eight wins in his past 10 appearances, losing only to reigning UFC champions Anderson Silva and Jon Jones.

Blessed with blinding hand speed and devastating knockout power, Belfort has earned a reputation for starting fast and fading late in fights. His opponent has taken notice.

Such confidence grew out of Rockhold’s string of nine consecutive victories. The 28-year-old Santa Cruz, Calif., native has recorded seven first-round finishes during his streak.

“I feel like I’m pretty well-rounded,” Rockhold said. “I can fight in all areas. I don’t back down from a fight. I’m not going to be shy. I’ll be in your face. Sometimes, I like to fight a little too much. I like to give and take. In this fight, I’ll have to be a little bit smarter. I have to respect Vitor and his striking.”

Anchored at the American Kickboxing Academy, Rockhold has honed his skills inside one of the sport’s most prestigious camps. He believes his strengths match up well with Belfort’s weaknesses.

“I came from a wrestling background and a lot of jiu-jitsu,” Rockhold said. “You’re going to see me wrestling. [I have] got to get some blood in Vitor’s arms and slow him down a little bit, and then maybe I’ll pick him apart on the feet from there or finish him earlier on the ground. This fight will be everywhere. It will be explosive. I don’t see how this fight could be boring.”

File Photo
Cariaso has won three of four.
Chris Cariaso has never suffered back-to-back defeats as a professional mixed martial artist, and he plans to keep that history intact when he meets Jussier da Silva in a pivotal flyweight affair.

“I am very excited for this fight,” Cariaso told UFC.com in his pre-fight interview. “I think the contrast of our styles makes this a very intriguing fight. He is a very good grappler and has good striking.”

Da Silva was once regarded as the world’s top fighter at 125 pounds. Losses to Ian McCall and John Dodson, the latter by second-round technical knockout in his Octagon debut seven months ago, have brought the Brazilian submission specialist back down to earth. Cariaso, with a background in sanshou and kickboxing, has compiled a 4-2 record since joining the UFC as part of the World Extreme Cagefighting merger in 2010.

“I have the defense to keep the fight standing, where I am much stronger,” he said, “but if we go to the ground, he will be threatened in every position.”