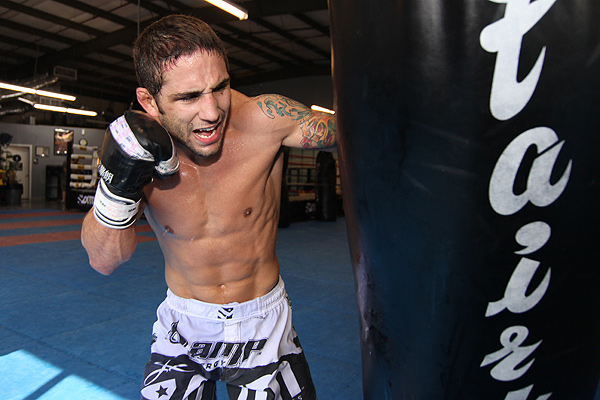 
The Ultimate Fighting Championship will return to network television on Saturday, when UFC on Fox 7 emanates from the HP Pavilion in San Jose, Calif. Believe me, I am as shocked as you are. After Ricardo Lamas forced poor Erik Koch to make that involuntary donation to the Red Cross in front of four million people at UFC on Fox 6, I thought we were history, sports fans.

I am happy to report that is not the case, as UFC on Fox 7 represents a superior effort from matchmaker Joe Silva, who drew upon all of his powers in an effort to appease the evil spirits that are undoubtedly still creeping around the Strikeforce Pet Sematary. While the main draw is certainly pay-per-view quality, the show’s undercard should also serve to satisfy the casual and hardcore fan alike.

Here are five reasons to tune into Facebook and FX to catch those prelims:


There is no denying Bellator MMA champion Pat Curran is a heck of a fighter, but for my money, Chad Mendes is still the second-best featherweight in the world.

Try to momentarily forget that Mendes had his brains scrambled by that Jose Aldo knee last year. Now look at Mendes’ resume and abilities and tell me with a straight face that “Money” does not earn himself another featherweight title bid in the not-too-distant future.

Granted, his journey back to “Scarface” would have likely have been expedited had he faced and defeated original opponent Clay Guida, but a win over an up-and-comer like Darren Elkins would still be nothing at which to sneeze.

Elkins has been charging hard toward the top 10, and he seems to be improving with every fight. Each of the 28-year-old’s last four performances has been impressive, and I think he has a solid shot of upsetting his favored foe if Mendes enters the cage with anything but the most serious concentration. This fight should tell us a great deal about how the featherweight picture will unfold in 2013, and you would be wise to watch.


This bantamweight showdown between T.J. Dillashaw and Hugo Viana should have you excited. If it does not, you should probably get your head checked.

Little needs to be said about Dillashaw that the Team Alpha Male standout has not already shown us in his three Octagon appearances since John Dodson smashed him at “The Ultimate Fighter 14” Finale. The 27-year-old responded with a trio of unquestionably dominant performances, wrecking Walel Watson, Vaughan Lee and Issei Tamura.

In “Wolverine,” Dillashaw has probably found himself his most dangerous foe since Dodson. The undefeated Brazilian put forth a masterful performance against Reuben Duran in December, hurling power punches at the Californian early and often to set up a first-round knockout.

Viana should look to throw those bombs from the outside in order to keep Dillashaw honest. The American is likely the more technical fighter of the two, and if Dillashaw can find his way into top position, it could spell curtains for the “Wolverine.” Which heavy-handed bantamweight will reign supreme?

File Photo
Masvidal was 5-1 in Strikeforce.
No offense to anyone, but does it not seem like Jorge Masvidal-Tim Means could just as easily be happening in a parking lot somewhere?

I like that, and so should you. Both of these dudes bring it hard and heavy each time they step into the cage -- so much so, in fact, that I find myself feeling kind of anxious about the type of violence that will unfold when they actually start tearing into each other.

I think Masvidal will probably hold a slight striking edge but only if the bout is fought at a moderate pace. Should Means decide to bum-rush his foe, I reckon this one could go either way. While undoubtedly skilled, “Gamebred” has shown vulnerability when his foes close the distance and break his rhythm. By contrast, if you allow Masvidal to establish his jab from range, as K.J. Noons did, you are probably in for a long night.

Can Means take it to his opponent and extend his winning streak to 10 fights, or will Masvidal pick up another nice win for the Strikeforce imports?

Aside from the athletic superiority he holds over virtually every other flyweight on the planet, Team Alpha Male’s lightest representative also packs the kind of power in his hands that is rarely seen at 125 pounds.

Make no mistake: Darren Uyenoyama will not be able to stand on equal footing with Benavidez on either of those fronts. If the San Franciscan tries to punch with the former title contender, he will more than likely wake up several minutes later asking the cageside physician how he came to be in such a state.

I am sure Uyenoyama is well aware of such an outcome, which is why I fully expect him to use all of his experience and guile in an attempt to force Benavidez to make a mistake and expose his back from the clinch or during a scramble. This is a task much easier discussed on paper than executed in the cage, especially against a man like Benavidez, which is why I think this fight will be such a blast to watch.


I cannot lie. Myles Jury really surprised me with how he handled Michael Johnson.

I fully expected Johnson to put Jury on the defensive from start to finish in their Dec. 29 bout. Instead, the exact opposite occurred, as the unbeaten 24-year-old outworked and outwrestled “The Menace” en route to a well-deserved unanimous decision win.

Now, another “Ultimate Fighter” finalist awaits the “Fury,” as Jury will have to contend with Ramsey Nijem. The 25-year-old Nijem rides a three-fight winning streak heading into the lightweight showdown and has really found a home back at 155 pounds after his loss to Tony Ferguson as a welterweight at “The Ultimate Fighter 13” Finale.

The winner of this bout could find himself heading toward the upper echelon of the UFC’s ultra-deep lightweight division. Which “Ultimate Fighter” alum will rise to the occasion and extend his winning streak?