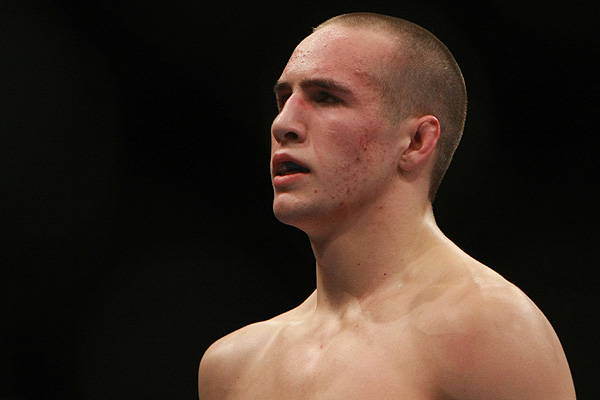 Rory MacDonald has the look of a future UFC champion. | Photo: Dave Mandel/Sherdog.com

MacDonald will meet Jake Ellenberger and his powerful hands in the UFC on Fox 8 co-main event on Saturday at the KeyArena in Seattle. The three-round bout carries with it serious implications in the welterweight division, and Ellenberger has done his part to stoke the flames of intrigue by promising the Canadian some “horizontal television time” and questioning his credentials.

“Rory is talented,” Ellenberger said in his pre-fight interview with UFC.com. “Top 10? No. He has been invented by the media and sold to the fans like a new Justin Bieber song.”

MacDonald has grown accustomed to the trash talk prevalent in today’s MMA.

“It doesn’t really bother me either way,” MacDonald said during a July 16 media call. “I don’t care about disrespecting me. I just get in there and fight my fight. If they suffer, they suffer. I don’t really care. It makes them look like an a--hole.”

One of the sport’s most promising young stars, MacDonald will carry a four-fight winning streak into the matchup. The 23-year-old Quesnel, British Columbia, Canada, native last appeared at UFC on Fox 5 in December, when he thrashed former two-division champion B.J. Penn for three rounds en route to a lopsided unanimous decision. MacDonald out-landed the Hawaiian by a staggering 125-53 margin in total strikes and 116-24 in significant strikes, according to FightMetric figures. Based at the Tristar Gym in Montreal, where he trains alongside Ultimate Fighting Championship welterweight titleholder Georges St. Pierre, he has secured 12 of his 14 professional victories by knockout, technical knockout or submission. Wins over “The Ultimate Fighter” Season 5 winner Nate Diaz and onetime World Extreme Cagefighting champion Mike Pyle anchor MacDonald’s resume.

Ellenberger has reason to be confident. The 28-year-old Reign MMA representative will enter the cage on the strength of back-to-back victories. An Omaha, Neb., native, Ellenberger last fought at UFC 158 in March, when he stopped former Strikeforce champion Nate Marquardt on first-round punches at the Bell Centre in Montreal. He has delivered 18 of his 29 career wins by KO or TKO, 10 of them inside the first round. The former Marine owns victories against onetime Strikeforce and EliteXC titleholder Jake Shields, “The Ultimate Fighter” Season 1 winner Diego Sanchez and ex-International Fight League champion Jay Hieron.

MacDonald and Ellenberger are on “equal footing” in the welterweight title picture, according to UFC President Dana White.

“I’m just going to focus on this fight for now,” MacDonald said. “My whole career has been going with the flow. Everything changes after each fight. I’ll see where I am after this fight and assess the options from there.” 
Five months after she came up short in her bid to unseat UFC women’s bantamweight champion Ronda Rousey, Liz Carmouche returns to the Octagon to confront a hard-charging newcomer. Carmouche -- who saw her two-fight winning streak halted when she submitted to a Rousey armbar in their historic UFC 157 encounter -- will face Brazilian prospect Jessica Andrade in a featured matchup at 135 pounds.

A potent finisher and accomplished muay Thai practitioner, Andrade has delivered all nine of her wins by KO, TKO or submission. The 21-year-old last fought at ProFC 47 in April, when she coaxed a tapout from Milana Dudieva with a second-round guillotine choke at the CSC Express Arena in Rostov-on-Don, Russia. Andrade has never fought in America.

“I’m looking forward to the fight,” Carmouche said. “She is a powerhouse on her feet, a talented grappler and quick off her back.”


KeyArena has hosted two other UFC events: UFC on Fox 7 and UFC Fight Night 24 ... John Moraga wrestled collegiately at Arizona State University, the same school that produced current UFC heavyweight boss Cain Velasquez, “The Ultimate Fighter” Season 8 winner Ryan Bader, UFC hall of famer Dan Severn and former two-division Pride Fighting Championships titleholder Dan Henderson ... Robbie Lawler and Bobby Voelker have combined for 18 first-round finishes in in 62 professional bouts between them ... When Yves Edwards started his career on Oct. 26, 1997, “I Know What You Did Last Summer,” “The Devil’s Advocate,” “Kiss the Girls,” “Seven Years in Tibet” and “Gattaca” were the top five movies at the box office ... Tim Means hails from Wilburton, Okla., a three-square-mile town of less than 3,000 people in the Southeastern part of the “Sooner State” ... Born on April 24, 1984, Germaine de Randamie shares a birthday with 14-time Grammy Award winner Barbara Streisand, 1999 National League Most Valuable Player Chipper Jones, “American Idol” Season 1 winner Kelly Clarkson and former Chicago mayor Richard M. Daley, among others ... Grudge Training Center’s Melvin Guillard has lost back-to-back fights on four different occasions in his career but never three in a row ... Jackson’s Mixed Martial Arts lightweight Aaron Riley has been competing in MMA longer than any other fighter on the UFC on Fox 8 lineup, having debuted on July 18, 1997 ... John Albert’s last five bouts, four of them losses, have ended inside one round ... Ed Herman is one of three fighters from “The Ultimate Fighter” Season 3 -- Michael Bisping and Matt Hamill are the others -- still under contract with the UFC.