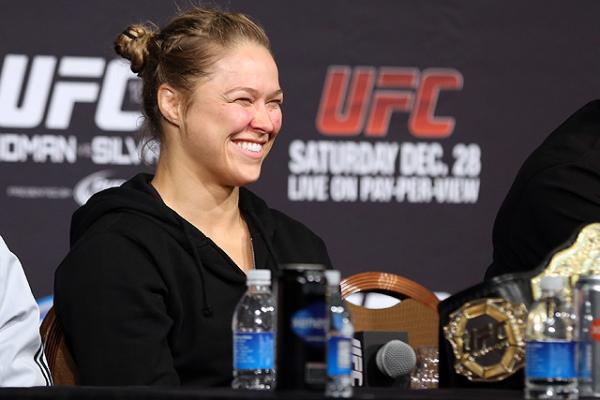 Ronda Rousey’s days in the cage may be numbered. | Photo: Dave Mandel/Sherdog.com


Remember that time, oh about six months or so ago, when Ronda Rousey caused widespread panic and outrage by saying she might be leaving MMA in as soon as two years? Well, that timetable might be accelerated.

Last summer, it seemed like a big deal when word got out that the Ultimate Fighting Championship women’s bantamweight titleholder had signed on for roles in the yet-to-be released movies “The Expendables 3” and “Fast and Furious 7.” That filming would take place prior to her UFC 168 camp only added to the backlash from the MMA community.

Fast forward to the present day, and it appears that Rousey’s career as a budding movie star is going quite well. According to a recent report in Variety, Rousey has been targeted for starring roles in two more upcoming films: “Athena Project,” based on the book by bestselling author Brad Thor, and the “Entourage” movie, which was spawned by the popular HBO series of the same name.

Warner Bros. is behind the choice to cast the Olympic judoka, and according to Variety, the decision was made in part because she did so well on set of the previous two films. In fact, it sounds as though Rousey could be receiving a serious push -- not just a series of limited cameos common to some professional athletes who possess the right look but have limited acting chops.

“While the ‘Entourage’ gig gives Rousey a recognizable property through which to get noticed for her acting, ‘The Athena Project’ could give her a possible franchise and perhaps the chance to become the female action star Hollywood is lacking,” Variety film reporter Justin Kroll wrote.

That does not sound like a here-today-gone-tomorrow endeavor. Not even a little bit. It sounds a lot like the exit strategy Rousey said she would need to leave MMA.

Not all that long ago, Rousey arrived in mixed martial arts to become the female star the sport was lacking. She made waves with her brash personality in Strikeforce, broke ground as the first woman champion of the UFC and then transferred that star power into a villainous turn as a coach on “The Ultimate Fighter.”

Rousey was not necessarily well-liked heading into her UFC 168 co-headlining bout against Miesha Tate, but the negative, reality TV-fueled public perception of her personality provided more than enough incentive for Rousey haters to tune in hopes of seeing her lose. Of course, the “Rowdy” one did not lose, but her post-fight snub of Tate’s outstretched hand served to further incite the masses.

Now, people with only a passing interest in MMA have an opinion on Rousey. They like that she appears to easily fit into a definable role. They will remember middle fingers and temper tantrums and angry tears, as well as a smiling, image-conscious Tate and how they wanted so badly for her to punish Rousey for her unsportsmanlike antics. Even though Rousey was not portrayed in the most flattering light, it was a win for all parties involved. 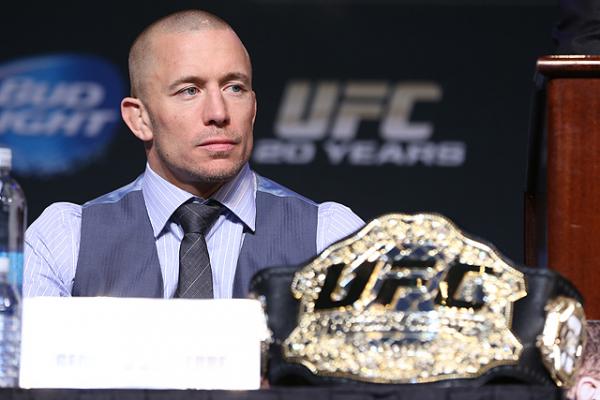 Photo: D. Mandel/Sherdog.com
St. Pierre walked away.
However, Rousey cannot fight Tate at every event. On Feb. 22, she will face Sara McMann, who won the silver medal in freestyle wrestling at the 2004 Summer Olympics. It will be the first time in UFC history that two Olympic medal winners have squared off inside the Octagon. It is a nice bit of timing, considering that UFC 170 coincides with the conclusion of the 2014 Winter Olympics. It was also prudent to keep Rousey busy. The more fights she has, the less time she will have to negotiate with movie studio executives, at least in theory.

However, there are no sound bites or images to build this particular rivalry. Instead, interest must reside solely in the considerable athletic accomplishments of the two combatants. Imagine that. Many of those who cheered so hard for Tate will have no idea who McMann is, and it is not like the UFC is launching some huge promotional campaign to change that. The UFC in 2014 is like speed dating. Most every week you will meet some new faces, make brief introductions and move on to the next one. Then you will forget about most of them by the next event. Only a precious few will linger.

Will Rousey be able to carry the burden as a top draw? She is as valuable a commodity as the promotion has right now, and with more movie gigs on the horizon, she clearly has some bargaining power.

Obviously, Rousey has White’s full support, even though he has not always been so gracious toward some of the organization’s other top stars. You could not blame some of them for asking: “Where’s the love?”

Welterweight champion Georges St. Pierre was blasted at the UFC 167 post-fight press conference for his decision to step away after a lengthy career that proved lucrative for both himself and the promotion. The hiatus could be temporary -- or it could be permanent. Last week, striking coach Freddie Roach told Fight Hub TV that he would advise St. Pierre to stay away for good.

“It’s really easy to make a decision after a tough fight like that and after Dana talking bad about him, getting him depressed a little bit and dragging him down. Most promoters would try to build you back up, but Dana’s not that kind of cat,” Roach said.

White’s initial reaction to St. Pierre’s announcement was indeed ugly, the result of potentially losing someone who has consistently persuaded people to pony up pay-per-view dollars. Now, he has to be aware that Hollywood’s growing interest in Rousey as a leading lady could mean that her time in the UFC is fleeting.

In turn, Rousey has to be aware that the goodwill might not last forever, especially if she elects to take a different path. If White could turn on St. Pierre, who did so much for so long, who’s to say he will not do the same to the woman who essentially convinced him to create a new division?

Even if he does not, the time is going to come when Rousey decides that learning lines beats getting punched in the face. The good news is that women’s MMA is already in a better place than it was when Rousey first flirted with the idea of an early retirement. Finding her successor -- someone that fans can love or hate with a passion -- will be the next challenge.