By and large, “The Ultimate Fighter 15” Finale was a successful production.

It featured a significant main event, a feel-good coronation and plenty of quick finishes. In short, if you were stuck at home on a Friday night, you could have definitely done a lot worse.

However, if you have been following the disappointing ratings of “TUF” for the past 12 weeks, it would appear that plenty of folks have not been spending their Friday evenings in front of the TV watching Jon Anik and friends. Regardless of whether the finale helped ease the disappointment of a season that saw ratings drop below one million viewers on five separate occasions -- “TUF” averaged 1.7 million viewers during its 14 seasons on Spike TV -- “The Ultimate Fighter” brand needs fixing, or at the very least, tinkering.

Behind his usual bravado, UFC President Dana White has conceded as much by promising changes when “The Ultimate Fighter: Live” resurfaces in the fall. The new format and network was supposed to revitalize the series, but after 15 seasons it is hard to keep anything fresh. While it is entirely possible that the Golden Age for reality TV and MMA has come and gone, that does not mean the show cannot get up off the deck, a la Martin Kampmann. Like it or not, “TUF” is not going anywhere, and if White gets his way, it will be churning out seasons long after “The Simpsons” has gone off the air.

Here are a few suggestions -- some realistic and some a little more ambitious -- to help “TUF” get back on track:


Face it: some nights are just not all right for fighting. Although it sounds good in theory to make “TUF” part of the fight weekend experience, most people have other things competing for their attention on Friday nights. If they are planning on ordering a UFC pay-per-view on Saturday, they probably will not feel compelled to watch what might be perceived as lesser talent compete the day before.

With Wednesday -- the show’s old slot -- there is no such problem. If you are home watching reality TV during the middle of the week, you probably do not feel like life in the outside world is passing you by. The same cannot be said for Friday, which is why “TUF” should return to Wednesday nights. 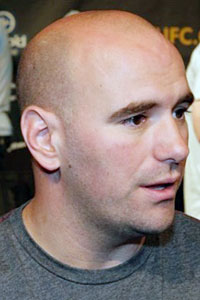 Dana White File Photo
White has his work cut out for
him with ‘The Ultimate Fighter.’
Anything involving Ronda Rousey is hot right now, so why not an all-female “TUF” with the outspoken Olympian and Rival X as coaches? If the UFC were to ever consider implementing a women’s division, this would be the perfect introduction. Pretty much anyone would be fair game for the cast -- with 135 pounds being the most likely weight class -- and Rousey’s presence alone would drive ratings.

The ideal scenario would have Cristiane “Cyborg” Santos returning from her suspension to coach opposite Rousey sometime in 2013. Regardless of the language barrier between the two women, it would make for must-see TV.

If Strikeforce has dissolved by then, the show’s winners could be funneled onto the UFC prelims, while Rousey-Santos could be the first women’s fight on pay-per-view.


If UFC 146 taught us anything, it is that people love heavyweights. Five main card bouts lasted a grand total of 21:50 on May 26, and that was OK. Big men do not need a lot of time to deliver a heavy dose of violence. When two 250-pounders appear destined for a quick finish, the masses are sure to be entertained, even if the skill displayed is lacking when compared to their lighter counterparts.

That said, another heavyweight “TUF” could be just what the doctor ordered. One needs to look no further than Bellator’s heavyweight division to realize the talent pool is not exactly overflowing, but that does not mean a cast of so-so behemoths cannot draw ratings. With the right look, build, demeanor and story, almost anyone can be marketed as a fearsome contender. Just ask Kimbo Slice.


If you are not invested in the characters, the fights themselves do not mean as much. That is why when two relative unknowns lock horns at the end of an episode, it does not always move the needle. That can change with the addition of what would come to be known as wild card fights. In these bouts, a cast member would have the opportunity to challenge a UFC veteran for the chance at some bonus cash and a free pass to the next round.

Such a plan would require a couple things, namely flexibility regarding the show’s tournament format and established fighters willing to risk their reputations. The right amount of money could definitely take care of the latter. Obviously, the biggest stars would not be available for these proposed matchups, but would not something along the lines of Al Iaquinta versus, say, Sam Stout have helped break the monotony of the standard weekly matchups?


It is common knowledge that you do not have to actually win “The Ultimate Fighter” to make it onto the UFC roster. In fact, it might actually be better to avoid the six-figure contract that comes with winning the show in order to get back to the bargaining table as soon as possible. While it might seem cruel and unusual, a season where only the winners were granted entry into the Octagon would make for some tense moments inside the “TUF” house.

The sense of urgency would increase for each fight, building to its peak at the finale. Sure, the UFC would have to fill out the rest of the card with existing talent instead of leftovers from the show, but the roster is so bloated these days that it would not be a huge problem.


Most fighters who are good enough to be top-tier UFC talents do not need to go the “TUF” route any longer, making it less and less likely champions will emerge from future casts. If “TUF” is indeed becoming more of a glorified regional promotion, it is time to go all-in.

Using an NCAA tournament-style seeding, the UFC could hold four live cards -- with eight fights apiece -- in various regions of the country to begin the season. The Round of 32 could take place the following week, with the eventual Sweet 16 making it into “The Ultimate Fighter” house. Not only would this type of format serve to foster regional pride, it would also give the promotion an unofficial farm system. In addition, allowing fans on site at earlier bouts would only increase the interest in individual fighters down the road.

If you are laughing after reading some of these proposals consider this: not that long ago, it seemed farfetched that that a show detailing the lives and training of prospective “Ultimate Fighters” would help save the Ultimate Fighting Championship. Now that the promotion is thriving, it is the show that needs help. Major renovations are the only way to go.