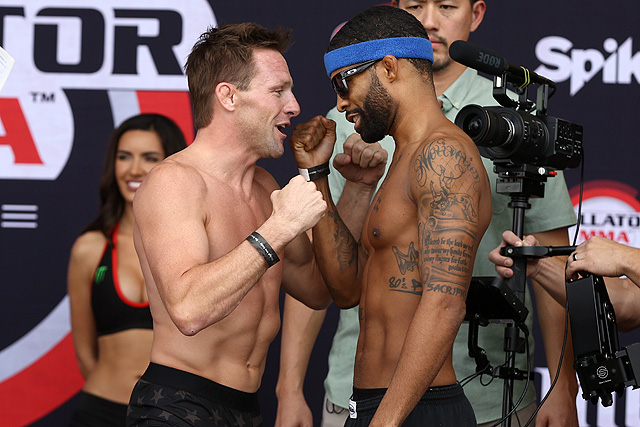 
The last time L.C. Davis was in a fistfight, he left the cage in need of some serious dental work following his “Fight of the Year” contender with Hideo Tokoro. It was a price he paid willingly to continue his climb on the bantamweight ladder.

Davis next takes aim at former two-division Bellator MMA titleholder Joe Warren in the Bellator 143 main event on Friday at the State Farm Arena in Hidalgo, Texas, where the winner figures to have a claim on the No. 1 contender’s seat at 135 pounds. Champion Marcos Galvao will defend the bantamweight championship against Eduardo Dantas on Oct. 23.

Based at an American Top Team affiliate in Kansas City, Mo., Davis has won seven of his last eight fights, including three in a row. The 34-year-old World Extreme Cagefighting, International Fight League and Sengoku veteran wrestled collegiately at Labette Community College in Parsons, Kan., and Missouri Valley College in Marshall, Mo. Davis has secured 15 of his 23 career victories by knockout, technical knockout or submission.

Warren has become a staple of the Bellator organization, having compiled a 10-3 record and held titles at 135 and 145 pounds. He last competed at Bellator 135 in March, when he surrendered the bantamweight championship in a second-round kneebar-induced submission to Galvao; the defeat snapped his career-best five-fight winning streak. Warren was an NCAA All-American wrestler at the University of Michigan and went on to win Greco-Roman gold at the 2006 Fila Wrestling World Championships. Outside of a few hiccups, his transition to MMA has gone according to plan, with previous wins over Galvao, Dantas, Joe Soto and current Bellator featherweight champion Patricio Freire anchoring his resume.

With the Warren-Davis matchup on the marquee, here is what to watch for at Bellator 143:


To say Bellator’s heavyweight division lacks depth would be a gross understatement. Ewerton Teixeira and Vinicius Kappke de Queiroz would like nothing more than to fill the void that exists behind inactive champion Vitaly Minakov.

An accomplished kickboxer and decorated karateka, Teixeira has only limited experience in mixed martial arts. The 33-year-old has won all three of his fights in his native Brazil but has not made an MMA appearance since he took a unanimous decision from Eduardo Borges at a regional event more than two years ago. Teixeira holds the rank of black belt in Kyokushin karate.

Quieroz has fought just three times since testing positive for steroids following his Ultimate Fighting Championship debut in 2010. The 32-year-old Team Nogueira rep last appeared at Bellator 102 a little less than two years ago, when he needed a mere 23 seconds to dispose of Lavar Johnson with punches. Quieroz has gone the distance only once in 10 professional outings. 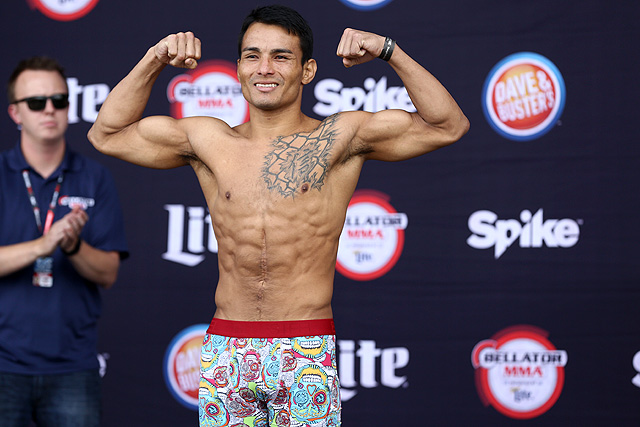 (+ Enlarge) | Photo: Dave Mandel/Sherdog.com
Santos is 27-4.
Gleristone Santos has been a hot prospect for some time, and he has decided to bring his talents to Bellator.

The 27-year-old Brazilian Top Team rep will make his organizational debut opposite John Teixeira da Conceicao in a preliminary scrap at 145 pounds. Santos has rattled off nine consecutive victories and wrapped up a two-fight tour in Titan Fighting Championship in September 2014, when he escaped with a split verdict over Robert Washington. “Toninho Furia” sports 15 finishes among his 27 pro wins and holds a 12-1 mark in bouts that reach the judges.

Teixeira, 28, will hit the cage with momentum of his own, as the Nova Uniao representative has posted an undefeated record (6-0-1) across his past six appearances. “Macapa” competed on Season 1 of “The Ultimate Fighter: Brazil” but failed to advance beyond the elimination round. Teixeira has recorded 10 of his 18 wins by submission: four by armbar, two by kimura, two by rear-naked choke and one each by guillotine choke and arm-triangle choke.


Two wrestlers at heart will get their chance to shine when the undefeated Darrion Caldwell faces the once-beaten Shawn Bunch on the undercard.

Caldwell has hit the ground running in MMA, with wins in each of his first seven fights. He was a two-time NCAA All-American at North Carolina State University, where he was a three-time Atlantic Coast Conference champion and 2009 NCAA national champion. The 27-year-old still ranks second on the school’s all-time list in career wins (109) and pins (58) and third in winning percentage (.893). Caldwell passed his most significant test to date at Bellator 137 on May 15, when he pocketed a unanimous decision against Rafael Silva.

An American Kickboxing Academy product, Bunch can point to amateur accomplishments of his own. He was a two-time NCAA All-American at Edinboro University in Pennsylvania, where he compiled a stellar 133-25 record. Bunch, 32, has successfully bounced back from his only career defeat -- a technical knockout loss to Steve Garcia at Bellator 105 -- with wins over Rolando Perez and David Duran.