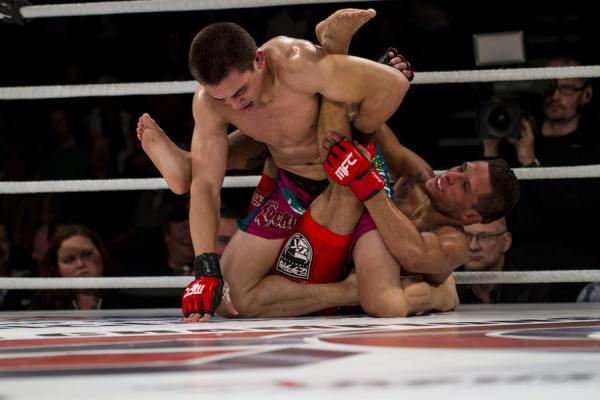 Anthony Birchak and Ryan Benoit may not have originally been slated to compete in the MFC 37 main event, but by the time their battle had concluded on Friday night, it was clear that both men had earned top billing.

Birchak outlasted Benoit in a back-and-forth, three-round bantamweight showdown, which became the new main event just three days ago after a heavyweight title clash between Chris Barnett and Smealinho Rama was scrapped due to a failed Barnett medical.

Both Birchak and Benoit had their moments in the 135-pound headliner, trading dominant positions throughout the contest. In round one, the 26-year-old Birchak nearly finished his foe with a rear-naked choke, only to see “Baby Face” come storming back with an RNC try of his own to close out the frame. Birchak continued with his submission-heavy attack in the second and third rounds, attempting everything from triangle chokes to armbars to keylocks. Still, Benoit would not relent and even returned fire, going move-for-move with his opponent by taking both mount and back control. In the end, however, the cage-side judges sided with Birchak, awarding the Arizonan scores of 30-27 and 29-28 (twice) to bring his career mark to 10-1. Photo: Jacob Bos/Sherdog.com
Harris hustled Zentgraff on the ground.
“[I thought I had the fight finished] like four or five times,” Birchak said in his post-fight interview at Shaw Conference Centre in Edmonton, Alberta. “I thought that rear-naked choke was on tighter than a sieve. To Ryan’s credit, he is one tough dude. That was the hardest fight of my career, for sure.”

Luke Harris stopped Jason Zentgraf with an unorthodox submission in the evening’s co-headliner, halting Zentgraf’s four-fight winning streak with a first-round neck crank from side control.

The 35-year-old hit a head-and-arm throw early in the bout and went to work with punches from the scarf position. After transitioning to the more traditional side control, Harris grabbed a modified arm-triangle grip and began to squeeze, torquing Zentgraf’s neck while simultaneously crushing the American’s face into his shoulder.

“I bait that one a lot,” said Harris of the finishing maneuver. “I look for the keylock on the far side, and he turns toward me to defend. He’s doing the right thing, but it opens his neck up.”

Kurt Southern made quick work of Mukai Maromo in their rematch, handing the former lightweight title challenger his second consecutive loss by way of north-south choke. Southern took “The Afrikan Assassin” down quickly and passed his guard, cinching the finishing hold and gradually clamping down on the choke to elicit a tap at 2:54 of the opening round. Southern previously handed Maromo his first career loss in 2010, submitting the striker with a triangle choke under the Aggression MMA banner.

Bellator veteran and former “Ultimate Fighter” contestant Sam Alvey returned to his winning ways on Friday night, knocking out Jay Silva in the third round of their welterweight contest. While the opening minutes of the bout featured little action, Silva soon drew first blood with a series of hard one-twos, only to watch as Alvey return fire with left straights and right hooks. Round two then saw Silva dropped with a hard right hook, though the UFC veteran survived to see the third round, where he was put down for the final time with an Alvey flurry. Though Silva immediately disputed the stoppage, referee Kyle Cardinal nevertheless saw fit to stop the contest 65 seconds into round three. Photo: J. Bos/Sherdog.com
Alvey wore Silva down and then
finished him off.
“I feel fine. I was rocked. I went down the first time, and I was ready to recover. I never went out. I don’t know why the ref stopped it. If I wasn’t moving, that would have been something else,” said Silva. “Why didn’t he jump in in the second round? I was more rocked then than now. It doesn’t make any sense for me.”

Lightweight Peter Neufeld picked up the seventh win of his career by putting on a striking clinic against fellow Canadian Garret Nybakken. All three rounds consisted exclusively of standup action, though Nybakken tried several times to take the fight to the floor as Neufeld stalked his foe with the threat of a hard right hand.

Neufeld picked up his work rate in round two, stringing together combinations while avoiding most of Nybakken’s awkward punches and kicks. Though Nybakken fought gamely in the third frame, his 25-year-old foe nevertheless glided to a unanimous nod from the cage-side judges, earning scores of 29-28 across the board.

Allen Hope kicked off the evening’s televised card with a second-round stoppage of middleweight colleague Paul Grandbois, though Hope did find himself on the end of snappy combinations from “The Punisher” to start the contest. Those linear one-twos eventually morphed into wild swings in the second stanza, and Hope took advantage, clipping Grandbois with a glancing overhand right before sealing the deal with ground-and-pound.

Jared McComb closed out the evening’s three-fight undercard with a first round submission of fellow 185-pound talent Marcus Hicks, pressing the action early with knees from the clinch. Though Hicks fired back gamely, McComb floored him with a four-strike combination and sunk a rear-naked choke, forcing the tap in 3:09.

Thomas Treadwell stopped older sibling Mike Treadwell in the first-brother-versus-brother contest in MFC history. Ten years younger than Mike, Thomas caught his brother with an awkward counter left hook and followed up with a flurry of punches that put Mike on the mat, where he submitted to strikes from side control at 2:22 of the opening round. Meanwhile, in the evening’s opening contest, featherweight Maged Hammo finished Allan Munroe with a second-round rear-naked choke.