The large, imposing Thompson sought to use his reach and jab, but simply could not stay off of his back against the Olympian Askren. The former standout wrestler for the University of Missouri put Thompson on the canvas again and again, showing true positional dominance as he moved repeatedly to side control and north-south position. When Thompson was able to reclaim guard, Askren simply passed; when he stood up, Askren took him down again.

Askren’s best offense came in round two, when he locked up a brabo choke that put Thompson in peril. The veteran “Goat” was able to defend, but couldn’t get off the mat. Thompson’s lone gasp of offense came with 10 seconds to spare, as he dove at Askren with strikes, but it was too little, too late. So thorough was Askren’s dominance that judge Jim Lambert turned in a 30-26 scorecard for the Bellator titlist.

“I’ve been a fan of his in wrestling; now I’m a fan of him in MMA,” Thompson said after the bout. “As [Bellator CEO] Bjorn [Rebney] and Bellator pointed out, I’ve fought all over the world, fought some of the best guys and beaten some of the best guys. I’ve never been so frustrated in a fight. The last 10 seconds was the only part I felt not-frustrated.”

At the post-fight press conference, Askren announced his intentions to move to Milwaukee to train with the team at Roufusport full-time, while Thompson also committed to Wisconsin in a different way. A practicing attorney in La Crosse, Wisc., Thompson announced his intent to retire after an eight-year, 53-bout career. 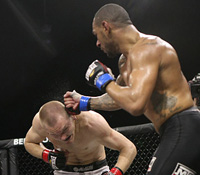 K. Mills
Hieron (right) bested Weedman.
Two men remained in Bellator’s welterweight tournament for the chance to take on the champion Askren, and it was Jay Hieron who advanced to the final to meet Rick Hawn, taking a unanimous decision (29-28, 29-28, 29-28) over Brent Weedman.

From beginning to end, it was a close fight and one in which “The Thoroughbred” did not take many risks. The first round was extremely close, with Weedman landing many clean strikes. However, Hieron picked up the pace in round two, landing wicked combinations and uppercuts from the clinch. Weedman kept Hieron moving backwards, but allowed the Xtreme Couture representative to use his counterpunches to great effect.

The third round featured similar ebb-and-flow, but Hieron’s superior boxing earned him the unanimous nod with three 29-28 scorecards.

“Sometimes it goes smooth, sometimes you gotta grind. Lucky for me, I know how to do both,” said Hieron after the bout. “I personally think I did more. I was sharp on the feet, more well-rounded. Brent came to fight, but I just fought better, bottom line. I’m happy with the decision. He’s a tough guy, he’ll be back.”

The second semifinal of the Bellator lightweight tournament saw a battle of unbeatens, as Hieron teammate Michael Chandler put on a wrestling clinic against Missoula, Mont., native Lloyd Woodard. 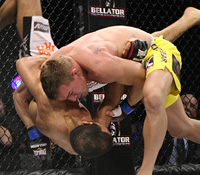 K. Mills
Chandler outpointed Woodard.
Woodard had little answer for the dominant wrestling and constant takedowns of his opponent. Chandler spent most of the bout on top of Woodard landing heavy head and body blows. Woodard never gave up and managed to take the back of Chandler deep in the second frame, but was unsuccessful in his own rear-naked choke attempt.

Woodard continued to stand up from the former Missouri Tiger’s takedowns and scored one of his own in the third, only to be reversed by Chandler. The final takedown sealed the bout for Chandler, who took 29-28 scorecards across the board and improved to 7-0.

With the win, Chandler locked up his position in the tournament final against formidable Brazilian Patricky Friere. 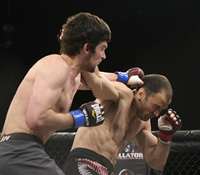 K. Mills
Stinson edged James.
The battle mostly took place on the ground, with James in Stinson’s guard. Stinson tied up James, threatening with numerous triangle choke attempts and a first-around armbar. One Stinson triangle nearly ended the fight in the second, but the bell saved James.

In the third, with the fight on the line, a late Stinson slam sealed the deal. Judge Gary Ritter scored the bout for James, while David Sutherland and Jim Lambert had it for Stinson, who moved to 20-7 with the victory.

Prescott, Ariz., heavyweight Eric Prindle lost a point for low blows in his bout with Josh Burns, but “The American Soldier” used heavy leather to open a cut over Burns’ left eyebrow and force the cageside physician to halt the bout after the second round.

In the welterweight opener, Derby, Kan.’s, David Rickels stayed unbeaten, as the 22-year-old tapped Dylan Smith with a triangle choke at 3:32 of the first round.