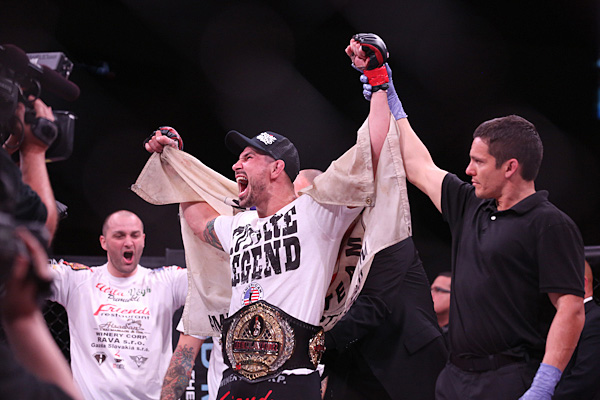 A stout right hand, a few well-timed takedowns and a heavy top game spurred Vegh to a unanimous verdict over Christian M'Pumbu, as he captured the Bellator MMA light heavyweight crown in the Bellator 91 main event on Thursday at the Santa Ana Star Center in Rio Rancho, N.M. Vegh (29-4-2, 5-0 Bellator) swept the scorecards with 48-47, 49-46 and 50-45 marks, as he registered his ninth consecutive victory.

It was not pretty. The two light heavyweights spent much of their 25-minute encounter in a strategic stalemate, pawing at one another with harmless jabs. Vegh was the aggressor, however, and repeatedly pushed M’Pumbu backwards with right hands, one of which floored the Congolese fighter in the first round. The Slovakian struck again in round three, where he rattled M’Pumbu (18-5-1, 3-2 Bellator) with a left uppercut, bullied him to the mat and eventually moved to a mounted position, opening a cut on the side of the champion’s head with a vicious elbow.

By the fourth round, fatigue had begun to set in on both men, and M’Pumbu was reduced to desperate clinches and takedown attempts. Perhaps sensing the title slipping from his grasp, the 35-year-old made one final push in the fifth, but Vegh steered clear of danger and rode out the decision. W. Fox/Sherdog.com
Awad teed off on Brooks in round one.
Millennia MMA’s Saad Awad needed less than a minute to dismiss the previously unbeaten Will Brooks with first-round punches in the Bellator Season 8 lightweight tournament semifinals. Brooks (9-1, 1-1 Bellator) met his surprising but decisive end 43 seconds into round one.

Awad (14-4, 2-1 Bellator) went right to work, staggering the Chicago-based prospect with a pair of right hands. He swarmed with more punches, shut down a desperate takedown attempt with unabated hammerfists and finished Brooks with one last volley of standing-to-ground blows. Awad has stopped his past six foes, five of them inside the first round.

“As soon as I hit him and he grabbed me, I saw he was rocked,” Awad said. “I just knew I needed to make space or he was going to wrestle me down and recover, so I couldn’t stop until the ref stopped it.” W. Fox/Sherdog.com
Rickels advanced to the finals with style.
Aggressive standup and an active top game carried David Rickels to a unanimous decision over Jason Fischer in the Bellator Season 8 lightweight tournament semifinals. All three cageside judges scored it for Rickels (13-1, 7-1 Bellator): 29-28, 30-27 and 30-27.

A late replacement for the injured Alexander Sarnavskiy, Fischer (6-2, 3-2 Bellator) was effective in spurts. Ultimately, he was overrun by Rickels’ strength, size and persistence. “The Caveman” did his best work in the third round, where he weathered a nasty gash to his left eyebrow. Undeterred, Rickels bullied Fischer to the mat, moved to full mount and twice transitioned to the back, threatening first with a rear-naked choke and then a late armbar. He settled for the decision.

“My hands felt a little heavy, so I showed a little bit of my grappling,” said Rickels, who will carry a three-fight winning streak into the final. “I was really looking to finish.” Photo: W. Fox/Sherdog.com
Holm flattened her outmatched opponent.
Multiple-time world boxing champion Holly Holm dazzled in her first MMA appearance in more than a year, as she dispatched the overmatched Katie Merrill with second-round punches in a women’s bantamweight bout. Holm (3-0, 1-0 Bellator) dropped the hammer 3:02 into round two.

Merrill (1-1, 0-1 Bellator) had no answer for the firepower her opponent carried into the cage. Holm denied repeated takedown attempts in the first round and buckled the Massachusetts export with a pair of wicked kicks to the body.

Knees greeted Merrill in round two, and though she secured a quick takedown, her good fortune was short-lived. Holm returned to an upright position and resumed her attack. A right hook to the body followed by a clean left to the head sent Merrill to the canvas, with Holm in pursuit. There, a swarm of punches brought it to a close.