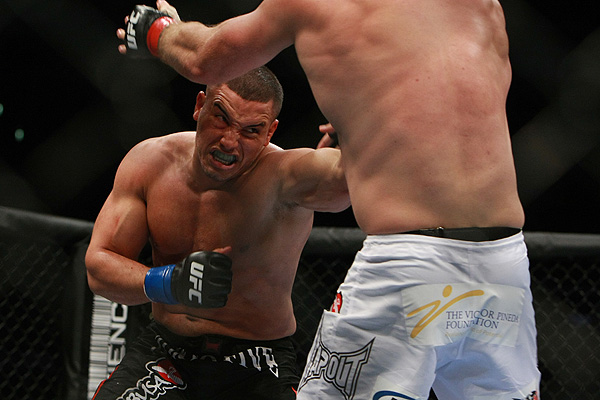 
Patrick Barry turned a hard night’s work into a nice little nest egg for himself.

The Duke Roufus protégé earned a $60,000 “Knockout of the Night” bonus after he stopped former training partner Antoni Hardonk on second-round strikes in a preliminary heavyweight bout at UFC 104 “Machida vs. Shogun” on Saturday at the Staples Center in Los Angeles. In addition, Barry and Hardonk were awarded matching $60,000 “Fight of the Night” bonuses.

Barry rebounded nicely from an embarrassing submission loss to Tim Hague at UFC 98 five months ago. The 30-year-old Louisianan punished Hardonk with strikes up the middle, weathered attacks on his legs and put him away with a standing shot behind the ear and follow-up strikes on the ground.

UFC President Dana White said Anthony Johnson, who flattened Yoshiyuki Yoshida in one of the featured bouts, was ineligible for the Knockout of the Night bonus as a result of his failure to meet the welterweight threshold. Johnson weighed in at 176 pounds at the official weigh-in on Friday.

Meanwhile, Stefan Struve pocketed a $60,000 “Submission of the Night” bonus after he finished UFC newcomer Chase Gormley with a beautiful triangle choke in the first round. The end came 4:04 into the fight, as the 6-foot-11 Dutchman notched the 14th submission victory of his career.