YUMA, Ariz. -- Bantamweights Anthony Birchak and Tyler Bialecki traded several submission attempts in their Bellator 41 preliminary bout Saturday at the Cocopah Resort and Casino, but it was Birchak that sealed the deal with a first-round submission.

A failed Bialecki armbar attempt presented the opportunity for Birchak to pass and lock up a tapout-inducing brabo choke on the “Bad Apple” at 4:06 of the opening period. 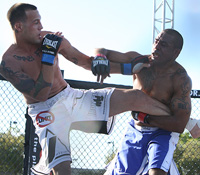 D. Mandel
Piedmont (left) edged Parker.
An entertaining featherweight scrap saw a pair of Tucson, Ariz., fighters in Michael Parker and Nick Piedmont fight to a contentious judges’ decision. Parker winged big punches at Piedmont, dropping him in the first and third rounds, and also locked up a late guillotine attempt, as well.

For his part, Piedmont controlled portions of the second and third stanzas with his longer punches, bloodying the Apex MMA representative in the process.

Brooks Mason saw the bout a 30-27 shutout for Parker, but Chuck Wolf and Henry Gueary both tallied the fight 29-28 for Piedmont, giving Piedmont the win via split decision. Sherdog.com scored the bout 29-28
Parker, giving him rounds one and three. 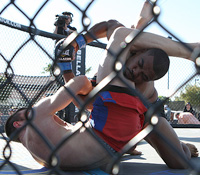 D. Mandel
Tierney (left) tapped out Moore.
In a middleweight contest, local fighter Dano Moore excited the partisan crowd by dropping Tucson’s Brendan Tierney with a left head kick in the fight’s opening moments. That excitement was short-lived, however, as the Arizona Combat Sports fighter recovered quickly to lock on a fight-ending armbar in just 49 seconds.

In the evening’s sole heavyweight bout, Yuma’s own Carlos Flores ended the night on a high note for the local crowd, stopping Rudy Aguilar via first-round punches. After patiently stalking Aguilar in the fight’s opening moments, Flores exploded with a flurry of punches and knees that left his hapless opponent looking utterly befuddled and retreating in haste.

Flores gave chase, dropping his opponent and following with hammerfists until referee Jason Herzog intervened at 1:19 of the first.