Sherdog.com will report from the First Council Casino in Newkirk, Okla., at approximately 8:00 p.m. ET with play-by-play and live results of Bellator 43, which is headlined by the fourth-season welterweight tournament final between Jay Hieron and Rick Hawn.

Check out the MMA Forums to discuss the card.

Press F5 on your keyboard to refresh this page, as play-by-play is updated in real time. 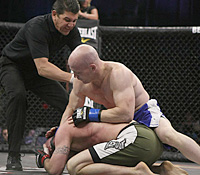 Keith Mills
Osborn (top) vs. Schatz.
Mike Schatz vs. Michael Osborn
Round 1
Kevin Nix is the referee for the first fight of the evening here in Newkirk. Osborn is taken down straight away and Schatz transitions into side control, landing blows from the top. The local product Osborn pushes Schatz into the cage, uses dirty boxing to land punches inside, and then lands some knees in the clinch. Now it's Osborn who takes Schatz down. Osborn postures and lands more blows as Schatz turtles up, not offering any offense in return.

Referee Nix has seen enough and stops the fight at 1:58 of the first round. 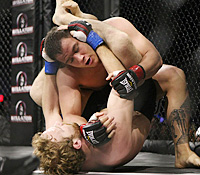 Round 2
The second stanza begins and "The Caveman" attacks with a quick body kick and a flurry. Staggered, Bouphanouvong takes Rickels down. This time Rickels expertly locks up a deep triangle choke, forcing the tap at of 1:11 the second round. Rickels moves his unbeaten record to 7-0 with the win. 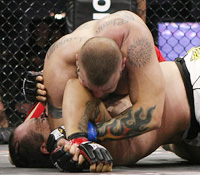 K. Mills
Sparks (top) submitted Lucero.
Ron Sparks vs. Vince Lucero
Round 1
The big men are just slinging leather with ill intentions early. Sparks getting the better of the boxing early on, then gets inside for the clinch and lands a few knees up the gut. A leg kick puts Lucero on the mat and Sparks gives chase, immediately taking side control. He leans from Lucero’s left over to his right, trying to frame up a kimura or keylock. It’s a keylock and “The Monster” wrenches it hard as Lucero grimaces. It’s very tight and Sparks spends a good 15 to 20 seconds trying for the arm lock before finally getting Lucero to tap at the 2:18 mark.

Chase Beebe vs. Jose Vega
Round 1 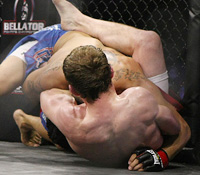 K. Mills
Beebe (bottom) caught Vega.
Referee Jason Herzog is in the cage for this bantamweight bout. Vega flicking out leg kicks early. He tries to tie up and eats a stiff punch inside from Beebe. More leg kicks from Vega, as Beebe cracks him with another right hand. Vega ties up and Beebe grabs a guillotine, then jumps guard. Vega pops his head out and takes Beebe’s back in the scramble, but Beebe puts his back to the fence. The former WEC champ tries another guillotine, again unsuccessful, and the pair splits with a little more than three minutes left in the opening round. Collar tie-up and Vega sneaks a few solid uppercuts inside. Vega is stepping inside with combinations, but paying the price with counters each time.

Beebe tries for a takedown and manages to plow Vega to the mat after a brief struggle. Beebe works to pass half-guard and even looks for another guillotine, but Vega gets to his feet. He pushes Beebe into the cage, but Beebe goes to the guillotine once more. This time, Beebe drops to his back and it’s very tight. Vega has no choice but to submit at 4:06 of the first round. With the win, Beebe earns a spot in Bellator's fifth-season bantamweight tournament.

Joe Riggs vs. Bryan Baker
Round 1
Both middleweights feeling it out in the opening minute; a Baker kick to the body of Riggs is one of the few strikes attempted. The larger Baker circles on the outside of the southpaw Riggs. As the fighters finally engage, Riggs catches an inside thigh kick on the cup. He gathers himself quickly and they’re back to work half a minute later. Midway through the round now and, as there’s been very little action, the period’s very much still up for grabs. With 1:40 to go, Baker lunges in and scores with a hard flying knee. He can’t land any follow-up punches, instead eating a counter hook from Riggs. Glancing head kick from Baker sends Riggs into reverse. Baker scores with another flying knee just before the bell. 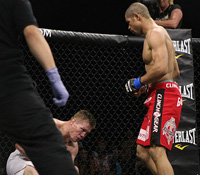 K. Mills
Baker (right) throttled Riggs.
Riggs catches a body kick from Baker, but can’t do anything with it. Baker tries to pump his jab, but it’s another slow round so far as he and Riggs feint and circle. Baker goes to the body, misses a two-punch combo and eats a left hand over the top from Riggs. Going back to the flying knee, Baker misses this time and is clipped with a hard overhand right. Baker ties up and drives knees to Riggs’ gut, causing “Diesel” to grimace in pain. He apparently complains to referee Jason Herzog about a low blow, but no stop is called. Baker backs up and starts throwing hands. One sneaky left hook lands right on the button and Riggs’ legs fold underneath him. Baker looks ready to pounce on the turtling veteran, but Herzog gets in between and waves it off. The official time of the knockout is 3:53 of round two.

Jay Hieron vs. Rick Hawn
Round 1
Jason Herzog is in charge of this season’s welterweight tournament final. Hawn takes the center of the cage as Hieron stalks outside, whipping leg kicks. Hieron connects with a short left hook as Hawn ducks his head to strike. Spinning back-kick from Hieron pushes Hawn into the fence. Hawn blocks a head kick and then catches a kick on the cup, but he’s good to continue. Hieron landing leg kicks and combos, looking confident as he circles to his right. He leaps in with a flying knee which misses the mark. Hawn continues to walk his man down, but he’s out of range for punches and his kicks aren’t as effective as Hieron’s have been thus far. Nice left hand from Hawn with a minute on the clock. Left high kick slaps Hawn on the chin, but the judoka doesn’t budge. Hieron gives chase with a few combinations to the bell.

Round 2
The pattern resumes from the first round: Hawn moving forward while Hieron wheels around, looking for angles to counterstrike. Hawn charges forward with a windmilling combination, one of which clips Hieron, who drops to the mat briefly. It looked like a partial slip, as Hieron’s instantly back up and on his horse. Hawn lands a solid left and blocks a few head kicks, but he’s still having trouble with range against the longer Hieron. Another left hook gets through for Hawn, who’s coming on strong late in the round. Three-piece from Hawn finds the mark, particularly the right uppercut at the end of the sequence. Hieron trips Hawn to the mat at the very end of the round, but Hawn uses underhooks to pop right back up.

Round 3
Hieron is pawing at his own nose early in the final frame. Left hook from Hawn is answered by a spinning back-kick from Hieron, who continues to move backward. Hieron grabs for a single-leg and then immediately relents. Hawn is continuing to put his left hand on the face of Hieron, who’s now rubbing his nose at every spare moment and is looking banged up beneath the left eye. Hawn comes in with a jab; Hieron answers with a one-two and a leg kick. Outside thigh kick from Hawn lands and buckles Hieron’s knee, but the “Thoroughbred” stays up and circling. Just over a minute to go and Hieron misses a spinning kick; Hawn smiles and continues moving forward. Jabs and spinning backfists from Hawn down the stretch. Hieron catches a body kick and lands a few short jabs just before the end, and we’re headed to what will be a very close decision.

Official scores: Judge Jason Greenwalt has it 29-28 in favor of Rick Hawn. However, judges Jim Lambert and Gary Ritter both have it 29-28 for Jay Hieron, the winner by split decision and Bellator Season 4 welterweight tournament winner. With the win, Hieron earns a title shot at reigning 170-pound champion Ben Askren.