Sherdog.com will report from the L’Auberge du Lac Casino and Resort in Lake Charles, La., at approximately 7:30 p.m. ET with play-by-play and live results of Bellator 45, which is headlined by the fourth-season featherweight (Daniel Straus vs. Patricio Freire) and light heavyweight (Richard Hale vs. Christian M'Pumbu) tournament finals.

Check out the MMA Forums to discuss the card.

Press F5 on your keyboard to refresh this page, as play-by-play is updated in real time. Keith Mills
Abercrombie tapped Parpart.
Joseph Abercrombie vs. Ben Parpart
Round 1
They come together and exchange some flurries. Abercrombie gets a takedown and is working from full guard. He works to side control and takes Parpart's back. He quickly sinks in a rear-naked choke, and Parpart taps at 1:11 of the first.

Rene Nazare vs. Kelvin Hackney
Round 1 K. Mills
Nazare choked Hackney.
Hackney comes out swinging, and they tie up. Hackney lands a knee, but Nazare answers with a punching combo. Hackney connects with a low kick, which is answered by a stiff right. Hackney locks up for a takedown after Nazare lands a combo, but Nazare defends and has Hackney against the fence. Nazare lands some knees and elbows as they break. Nazare's reach is overwhelming Hackney. Hackney goes for takdown but Nazare's defense is solid. They tie up and Nazare pushes the fight against the cage. Hackney starts to land some kicks then shoots in for takedown, but Nazare defends and lands a nice combination. Nazare then gets a takdeown and goes to full mount and gives up his back. Nazare goes for a rear-naked choke and coaxes a tap with 16 seconds left in the round.

Luis Santos vs. Nicolae Cury
Round 1
Santos is letting his legs fly, as the two feel each other out in the opening minute. Santos continues attacking the legs, and switches stances. Santos lands a thudding kick to the midsection that gets an "ooh" from the crowd. Cury's midsection is bright red, and he starts backing up. Santos comes in with a flying knee and they tie up to end the round. 10-9 Santos. K. Mills
Santos (left) outpointed Cury.
Round 2
They start slowly. Both men are afraid to engage. Then Santos unloads a low inside kick. The inside of Cury's leg is bright red. Santos hasn't thrown one punch the entire fight. Cury finally lets his hands go, and they tie up. Cury goes for a knee in the clinch and hits Santos low. The action stops briefly. They start circling again. Cury is now stalking Santos, looking for openings. Santos is too quick, but has not initiated much offense. He finally lands another low kick, and then ducks under a combination and gets Cury on the ground. Santos doesn't do much from full guard and the round ends. 10-9 Cury.

Round 3
Santos lands a low kick early that drops Cury. Santos continues to kick as Cury lays on the ground. Cury tries to get up, but his leg gives in. Cury can't get off the ground. Then Santos jumps into Cury's guard. The action comes to a stand still. The ref finally stands them up and Cury gingerly gets of the ground and goes for two head kicks immediately, but slips and Santos is back on top in full guard. The ref stands them up again. Cury goes in for a combination, but Santos gets a takedown again. He remains inactive from full guard. The ref stands them up again. Cury pushes the pace, and Santos ties up. He's clearly gassed. Round ends; 10-9 Santos.

Official scores: All three judges see the bout 30-27 for Santos, who takes the unanimous decision.

Tim Ruberg vs. Mike Fleniken
Round 1
Both fighters are from Louisiana, but Fleniken is clearly the crowd favorite. Rubeg gets a takedown early and ends up in half guard. Ruberg establishes the mount and lands some solid elbows. Fleniken escapes, but Ruberg chases him down and they clinch. Fleniken briefly secures a guillotine. Ruberg escapes and gets into north-south position. Both fighters are staying active on the ground. They get it back to the feet, and Fleniken eats a head kick as they break. Fleniken then lands one of his own. Ruberg shoots for a single and gets the fight back to the ground. They both stand back up and swing wildly as the round ends. 10-9 Ruberg. K. Mills
Ruberg (standing) bested Fleniken.
Round 2
Ruberg catches a low kick, lands an overhand right, then slams Fleniken to the ground. He establishes north-south, then goes to side control. Ruberg tries to get the mount, but Fleniken defends. Fleniken lands some nice elbows from the bottom, but can't get Ruberg off of him. Fleniken rolls over on to his knees, then to his back and catches Ruberg in half guard. Ruberg finally gets mount after several scrambles, but Fleniken is active on the bottom.

His movement keeps Ruberg from landing anything significant. The round ends with Ruberg in side control. 10-9 Ruberg.

Round 3
Ruberg pushes the action, landing a low kick, then a straight right. He then catches Fleniken with a left hook that drops him. Ruberg establishes side control, then transitions to mount. Fleniken gets a nice reversal, but Ruberg jumps back on him and takes his back. Ruberg has one hook in, but Fleniken escapes and rolls onto his back, giving Ruberg north-south. Ruberg maintains a dominant top position but hasn't been able to land any big shots or attempt submissions. They finally stand back up. Fleniken swings wildly. Ruberg catches a kick and puts him back on his back. Ruberg is in full guard. After laying there for a minute he finally stands back up and the crowd calls for Fleniken to get active. They each land some shots as the round ends. 10-9 Ruberg.

Official scores: 30-27s across the board for Ruberg; who wins by unanimous decision.

Karl Amoussou vs. Sam Alvey
Round 1
Amoussou goes for a head kick early, but falls and jumps right back up. Alvey goes in for a combination, but Amoussou counters with a straight right and low kick that puts Alvey on the ground. He tries to secure Alvey's back, but Alvey reverses and ends up on top in Amoussou's full guard. Referee Jason Herzog stands them up and Amoussou works the low kicks. Alvey closes the distance, but Amoussou takes him down and gets mount. Amoussou is dropping some ferocious elbows. Alvey is bleeding badly. Amoussou goes for an armbar, but Alvey is slippery from all the blood. He reverses and ends up in Amoussou's full guard, as the round ends. 10-9 Amoussou.

Round 2
Amoussou tries to close the distance, but Alvey catches him with a combos twice. After a flurry of punches from both men, they tie up against the cage. Amoussou gets Alvey on the ground, but Alvey reverses and ends up in full guard. Alvey can only muster a few punches to the midsection as the uneventful round ends. 10-9 Alvey. K. Mills
Alvey (top) outgunned Amoussou.
Amoussou lands some kicks to set up a combination, then goes for a takedown. Alvey gets the clinch and lands some knees. Alvey grimaces as Amoussou lands several knees to his inner thigh as they are pushed against the fence. Herzog stops the action as Alvey eats some low knees from Amoussou. The crowds starts chanting "USA" during the stop in action. Alvey finally moves forward with a combination, but its blocked easily. Amoussou is content to fire the occasional low kick. Alvey lands a nice combo. Both men are trading shots, until Amoussou pushes Alvey against the fence. Alvey finally gets Amoussou to the ground, landing in full guard. Alvey flurries with some elbows and punches as time expires. 10-9 Alvey.

Bellator Featherweight Tournament Final
Daniel Straus vs. Patricio Freire
Round 1
Freire wings a big overhand that Straus ducks under. Straus throws Freire, but he pops up right away. Freire holds Straus against the fence and tries for a couple throws, but Freire blocks them. The crowd becomes impatient, then Straus throws Freire and they come back to the center of the cage. Patricio works a standing guillotine, but Straus is too tall. They scramble and end up back against the fence. The fight moves back to the center of the cage. Straus throws a straight right and then goes for a takedown, but Freire sprawls nicely. The fight gets back to the feet. Freire tries for a flying knee that barely misses and the round ends. 10-9 Freire.

Round 2
Both men exchange combinations. Freire ducks under and gets a big takedown. He has Straus' legs wrapped up against the fence. He starts knees to the body. Herzog stops the action for an illegal knee while Straus was down. Replay shows the knee was legal. Action starts back with Freire attacking with low inside leg kicks. Freire looks for a single-leg takedown, but Straus defends nicely. The two spend the last couple minutes of the round circling, then with 10 seconds left they exchange, scramble and Straus attempts a standing guillotine as time expires. 10-9 Patricio. K. Mills
Pitbull (right) got by Straus.
Round 3
Freire goes for a low kick. Straus counters with a high kick. Then Patricio goes low again, and Straus attempts a flying knee that hits nothing but air. Freire begins pushing the pace and lands some combinations. Straus goes for the takedown, but Freire defends. He is looking for a guillotine, but lets it go. They stand back up. Freire taunts Straus, after Straus whiffs on some straight punches. Straus moves forward, but Freire goes for a takedown. Straus defends and they are back in the center of the cage. Freire taunts him again throwing his arms in the air. Then he gets a big slam at the end of the round. 10-9 Freire.

Official Scores: 29-28 and 30-27 (twice) for the winner by unanimous decision, Patricio Freire.

Bellator Light Heavyweight Tournament Final
Richard Hale vs. Christian M'Pumbu
Round 1
Hale initiates the action with some kicks and straight punches. M'Pumbu easily defends. M'Pumbu finally gets active and lands a couple low kicks. Hale rushes forward with straights, and pushes M'Pumbu against the fence. The fight goes to the ground, as they get back up, M'Pumbu lands a solid knee that rocks Hale. He then lands a hard straight right that puts Hale on the ground. M'Pumbu looks for a guillotine, but lets it go. They stand back up. They exchange a few times, but neither fighter is anxious to seriously engage. They spend the last 10 seconds circling. 10-9 M'Pumbu. 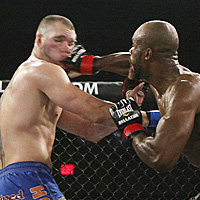 Round 2
Hale throws some feeler jabs out, and M'Pumbu lands and low kick. Hale tries to string together some combos but nothing lands flush. M'Pumbu keeps attacking with low kicks. Hale tries to jump in with jabs and hooks, but M'Pumbu is too quick. M'Pumbu continues to land kicks to Hale's lead leg. Hale has to switch stances, but keeps pressing forward. Hale goes for a standing side kick. The round ends with Hale jumping in for a short flurry, but M'Pumbu lands some counters. 10-9 Hale.

Round 3
Hale lands a combo that has M'Pumbu backing up. They come back to center and exchange punches and kicks. Both men are are content to keep the fight standing.

Neither has attempted a takedown. M'Pumbu is waiting for Hale to wade in and looks to counter. M'Pumbu lands a nice kick to the midsection, but doesn't follow up. Hale weakly tries for a takedown , then M'Pumbu lunges in with a huge right hand that drops Hale. He swarms and lands some heavy blows while Hale tries to defend, but Herzog stops it with 43 seconds remaining in the third. M'Pumbu wins the Season 4 light heavyweight tournament with three knockouts/TKOs. 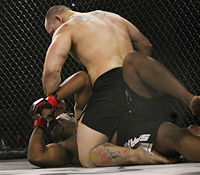 K. Mills
Jordan (top) teed off on Hill.
Round 1
Hill throws two low kicks early. Jordan responds with a punch combo. Hill lands a combo, but Jordan ducks under and gets a big slam. He transitions to mount, and works some elbows and punches. Jordan overwhelms Hill, and referee Myron Gaudet stops it at 1:56 of round one. The crowd goes wild.