Strikeforce CEO Scott Coker expects Fedor Emelianenko to return to the promotion in the first or second quarter of 2011.

“He’s not going to be back this year because the schedule is already full,” Coker said Wednesday during an episode of “Beatdown” on the Sherdog Radio Network. “Who he fights (next), that’s something that we’ll probably have an announcement in the next, I would say, four weeks we’ll have an announcement on how we’re going to unveil this whole thing.”

Fedor competed last in June, when Fabricio Werdum upset him with a triangle-armbar submission. It was the Russian’s first loss since December 2000.

As for Werdum, the Brazilian heavyweight is recovering from the elbow surgery he had in August.

“The message that I got from his manager is that he will be available probably late first, early second quarter of next year,” Coker said. “Injuries take time. We’re not going to rush him. He just came off a big victory. … When he comes back, we want him to be 100-percent healthy.” 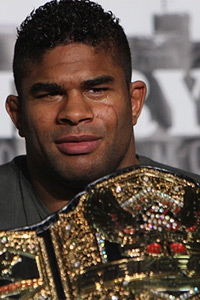 File Photo
Alistair Overeem
Meanwhile Strikeforce heavyweight champion Alistair Overeem has been kickboxing. He scored a first-round stoppage of Ben Edwards on Saturday to advance to the Dec. 11 K-1 World Grand Prix 2010 Final. Overeem’s camp has made it clear to Coker that winning the tournament, which is the most celebrated in kickboxing, is important to “The Demolition Man.”

“It’s very clear in our agreement with Alistair that we have booking priority,” Coker said of allowing Overeem to fight in K-1. “So we could have easily said no, but then is it really fair to him? It’s a personal goal of his. Let him go try to be the best standup fighter in the world. … The best strikers in the world fight in K-1 in Japan. He already won his first fight. I thought he looked amazing, and now he’s going to go into the finals and fight Tyrone (Spong), who is no joke. I think Alistair is going to have his hands full with that fight, but we’re going to support him and we’re going to wish him well and hopefully he can win the whole tournament. Then he can come back the Strikeforce champion and the K-1 heavyweight champion. As far as accomplishments, I’ve never seen that done before.”

Coker did not cite specific matchups for the returns of Overeem, Werdum and Fedor, but he expressed some ambitious plans for his heavyweight division in the coming year.

“One thing I can tell you is all these guys … Alistair, Fedor, Fabricio, Josh Barnett, ‘Bigfoot’ (Antonio Silva), (Sergei) Kharitonov, Andrei Arlovski, Brett Rogers, all those guys are all going to fight each other in 2011,” Coker said. “We’re not going to hold anything back. You’re going to see these guys fight the toughest guys because really, if you’re a heavyweight, there are no easy fights in Strikeforce. It’s arguably the best heavyweight division in the world, and I think Josh Barnett said it best. The competition is here. He signed with us because he wants to fight all those guys. We’re going to put those fights together, and I think the fans are going to love it.”

Check out the full interview (beginning at 55:55) with Scott Coker.