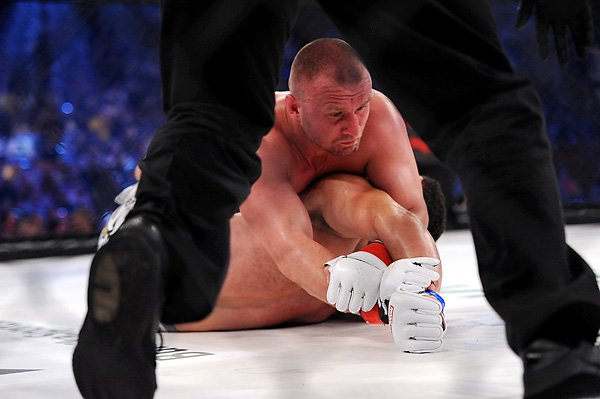 Damian Grabowski added another win to his resume, submitting Eddie Sanchez by keylock at 2:02 of round two in the MMA Attack 2 main event in Spodek, Katowice, Poland on Friday.

The Pole’s game plan was no secret, as he ducked under Sanchez's first punch and went for a takedown at the outset of the fight. However, the majority of the first period was spent in the clinch, where Grabowski hit Sanchez with numerous body shots.

Round two saw the UFC veteran Sanchez going for the takedown himself. Grabowski, always content to fight off his back, allowed it and looked for a submission. He hit a kimura switch and held on to Sanchez's arm to get the American to tap out. It was the first submission loss in 19 career fights for the “Manic Hispanic.”

"I board a plane on Tuesday and am going to Canada," said Grabowski, referring to his fight at Bellator 67 next Friday. "I may be an old rattlesnake but I move like a young viper."

In a fight that everyone expected to be over within two minutes, the crowd saw an improbable round two as Lithuanian-born bodybuilder Robert Burneika denied Marcin Najman his first pro MMA win. Piotr Pedziszewski
Burneika shockingly got it done
against the notorious Najman.
Burneika took a very patient approach to combat exhaustion and was reluctant to run after Najman, who went in circles around him. Finally his patience snapped and Burneika pinned Najman on the fence and clobbered him. The boxer was let off the hook because Burneika landed several illegal blows to the back of his opponent's head.

There was no running in round two, when Burneika managed to trip Najman in a similar scenario. As the punches kept landing, Najman, much to the delight of the crowd, decided to tap out and was roundly heckled out of the building.

"[He] who talks much, does little," said Burneika after the fight, referring to Najman's repeated taunts. Burneika then sarcastically thanked his foe's coach for "preparing him so well."

Almost two years after their first fight Hans Stringer once again bested Michal Fijalka, though it took him a full three rounds this time. Stringer was the better wrestler and took Fijalka down in every frame.

The Pole couldn't do much to get off his back and although Stringer never had any threatening offense, it was more than enough to pull away on the scorecards. Judges Rafal Dudek and Slawomir Szamota saw the outcome as 30-28, while Jan Schneider scored it as 30-27.

Taking the fight on barely more than a day’s notice, Sergej Grecicho was all business in the cage, submitting Sebastian Grabarek in 3:01 of the second stanza. The fight was a tightly contested grappling affair -- both fighters had back mount, but when Grecicho swept the Pole to full mount in round two it proved to be a deciding moment. Grabarek gave up his back, and though he hung on for quite some time, Grecicho found a way to sneak his hand under his opponent's chin to get the submission victory.

Zabrze-born Peter Sobotta enjoyed a successful homecoming, as he quickly tapped out Juan Manuel Suarez with a rear naked choke in 2:18 of round one. Sobotta took the Spaniard down right off the bat and went a submission. Suarez had the opportunity to scramble out, but his timing was off, allowing Sobotta to move into back control, from where the outcome was elementary. P. Pedziszewski
UFC vet Peter Sobotta cleaned
up Suarez on the ground.
Wendres Carlos da Silva only had two weeks to prepare and borrowed cornermen to help him out, but it was enough to submit Piotr Strus early in round two. Strus never found his range and was caught a few times on the chin by the Brazilian.

It was the ground game that made the difference, however, as the BJJ purple belt scored a trip takedown early in round two and immediately secured a brabo choke that elicited the tap out from the Polish fighter 44 seconds into the period.

Declared "Polish Newcomer of the Year" in 2011, Krzysztof Jotko had a successful start to his 2012 campaign and welterweight career by beating Denmark's Damir Hadzovic via unanimous decision.

Jotko, who struggled with the weight cut, found enough will to keep scoring points with effective strikes and takedowns, even while extremely tired. Despite the one-point deduction handed to him by referee John McCarthy, judge Jan Scheider scored the fight 29-27 and judges Maciej Glabus and Grzegorz Jakubowski had it 29-28 for the Polish fighter.

Three undercard fights began the card: Chechen-born Arbi Shamaev took a well-deserved 29-28 unanimous nod over Rafal Raczynski; Arkadiusz Zaba finished Remigiusz Gros with a triangle choke in 1:10 of round two and Livio Victoriano needed just one round to submit Robert Bryczek with a heel hook.