Before a holiday crowd of 11,970, Zaromskis defeated Jason High and Hayato "Mach" Sakurai to complete his improbable run to the top.

Zaromskis opened the first round of the final against High with a flying knee, which the American caught before attempting a takedown. The Lithuanian showed excellent balance, but High eventually brought him to the ground. However, High could not mount much of an assault from guard before Zaromskis kicked him away. High jumped onto the Lithuanian to attempt a guillotine, but Zaromskis escaped and fell into High’s guard instead before also being kicked off.

The end came soon after, when Zaromskis threw a jab, right straight, right high kick combination. The kick connected and knocked out High out at 2:22.

“It was a very hard tournament, and [there were] very strong opponents, but the Japanese crowd just gave me energy. I feel, in Japan, different,” Zaromskis said. “I’m very happy, and I’m still in a dream.”

Zaromskis’ amazing run started off strong with his upset stoppage against Sakurai. The fight came down to the Cage Rage veteran flying at Sakurai with a merciless pace and throwing everything but the kitchen sink at the Japanese standout. Sakurai survived and countered with precise punches and low kicks. Both men connected with huge shots, but the finish came when Zaromskis launched a left high kick that put Sakurai down on all fours. Zaromskis lunged and delivered four unanswered punches to the head before the referee rescued Sakurai at the 4:03 mark of round one. 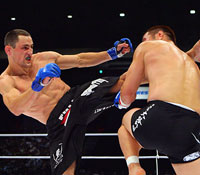 Though High put down Galvao early with a monstrous left straight, the BJJ ace hung tight and recovered. He swept High, took top position and passed to mount and back mount at will for the final half of the first round, threatening with chokes and big punches. High rallied in the second, however, as he pressed Galvao with multi-level combinations and body kicks. Galvao covered up but offered little resistance, instead falling to his back in attempts to bait High into following him. The American refused and instead forced stand-ups by referee Moritaka Oshiro.

At the conclusion of the match, two judges sided with High in a contentious split decision.

Despite the pre-fight hype selling the Shinya Aoki-Vitor Ribeiro non-tournament matchup as a fight between the world’s best grapplers, Aoki protested vocally and reminded anyone who would listen that the bout was an MMA fight and not a grappling match.

As such, Aoki more or less proved his point by employing a conservative stand-up game, as he kept “Shaolin” at bay with rangy middle kicks. The former Shooto 154-pound world champion could not close the distance for punches, nor could he take down the Japanese ace until the final moments of the second round.

On the ground, Aoki stifled Ribeiro with the rubber guard and closed out an otherwise controlling decision on the scorecards of judges Matt Hume, Yasushi Miyake and Takashi Kobayashi. 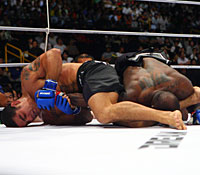 Former World Extreme Cagefighting middleweight champion Paulo Filho and Melvin Manhoef engaged in a brief but exciting tilt that inevitably ended in an armbar win for the Brazilian.

In typical Manhoef fashion, however, the Dutchman had Filho on the run early, as he slammed big punches into him before getting caught in the clinch. Filho bowled over the overzealous Manhoef and methodically set up the armbar for the tapout 2:36 into round one.

UFC veteran Jesse Taylor was well on his way to demolishing Dong Sik Yoon before the South Korean verbally submitted because of an apparent broken foot.

From the opening bell, Taylor was relentless in putting down Yoon, as he took top position with authority and brought the judoka back to the mat when he scrambled. During his suplex, Yoon’s left leg was pinned between the canvas and Taylor’s legs, resulting in the injury. Yoon verbally submitted at the 1:02 mark and was taken out of the arena in a wheelchair.

Katsunori Kikuno racked up another win for traditional martial arts in dispatching Andre Amade, as he pounded out the Brazilian in the first round.

Kikuno survived an early counter right and retook the center of the ring with his Sanchin stance. There, he waited patiently and perplexed Amade to such an extent that it resulted in a stalemate and prompted the referee to issue warnings for inactivity.

Kikuno sprang soon after, throwing a hard crescent kick to the body before hitting an outside trip. Amade gave up his back, and Kikuno dropped punches for the finish at 3:47.

Ikemoto went through his bag of tricks early -- though he did not reveal his new “white cat” maneuver. He attempted double punches, axe handles and big kicks, but Saffiedine handled them all with ease. The Belgian defended well off his back and countered on the feet, as he landed big right hooks, low kicks and push kicks before capturing mount in the second round.