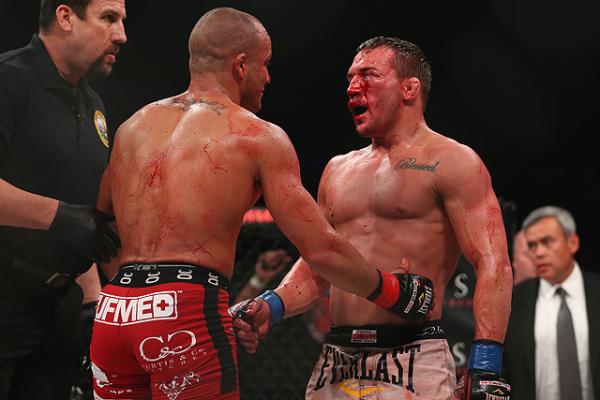 Eddie Alvarez and Michael Chandler laid it all on the line. | Photo: Dave Mandel/Sherdog.com


Not all rematches live up to expectations. Michael Chandler and Eddie Alvarez made sure theirs did.

Alvarez reclaimed the Bellator MMA lightweight championship in another scintillating encounter with Chandler, as he eked out a split decision over the previously unbeaten Alliance MMA standout in the Bellator 106 headliner on Saturday at the Long Beach Convention Center in Long Beach, Calif. All three cageside judges scored it 48-47: Steven Davis and Derek Cleary for Alvarez, Mike Beltran for Chandler.

A stiff left jab and a commitment to lateral movement were key weapons in the Alvarez arsenal. He left Chandler with severe damage to his left eye, which was bleeding heavily and virtually swollen shut by fight’s end. Alvarez (25-3, 9-1 Bellator) punctuated his victory with a superb fifth round. There, he ripped into Chandler with punches along the fence, moved to his back on the ground and nearly ended it with a rear-naked choke. Blood was everywhere.

“It takes two people to put a fight on like that,” Alvarez said. “We did it together. Another ‘Fight of the Year,’ guys. There isn’t anything to boo about. This is my teammates, my wife, my kids and a whole lot of sacrifice. I had a feeling in my gut that I was going to be the new lightweight champion.”

While Alvarez chipped away on the feet, Chandler (12-1, 9-1 Bellator) utilized his wrestling. He delivered repeated takedowns against the Blackzilians member and threatened to finish him with a rear-naked choke inside the first round. Alvarez survived and forced the champion into deeper waters. Chandler was at his best in round four, where he struck for another takedown and tore into Alvarez with ground-and-pound. However, he failed to carry the momentum into the final five minutes and, as a result, lost his grip on Bellator gold.

“It was great,” Chandler said. “It was just another fight. I’ll get back to the drawing board and see what happens next.” 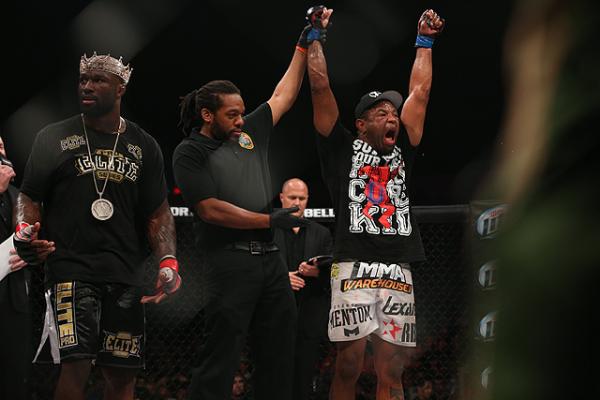 Photo: D. Mandel/Sherdog.com
Lightning struck twice for Emanuel Newton.
A variety of spinning attacks combined with excellent defensive wrestling spurred Emanuel Newton to a unanimous decision over Muhammed Lawal, as the Reign MMA representative won the Bellator interim light heavyweight championship in the co-main event. All three judges saw it the same: 49-46 for Newton (22-7-1, 5-1 Bellator), who has beaten “King Mo” twice in less than nine months.

Lawal (11-3, 3-2 Bellator) controlled much of the first round with his takedowns, ground-and-pound and heavy close-quarters punches along the fence.

Then, he inexplicably turned away from his wrestling. Newton capitalized, as he wobbled the former Strikeforce champion with a second-round head kick and kept Lawal off-balance with kicks to the legs and body.

In the fifth round, Lawal stood up Newton with a counter right hand and delivered a takedown. However, the 32-year-old Murfreesboro, Tenn., native needed a finish, and it did not materialize.

“I can’t even describe the feeling I have right now,” Newton said. “I worked so hard for this. Mo put up a good fight. He got a lot of takedowns, but the striking -- I had him wobbled a little bit. I’m not going to fight another wrestler like that in MMA, and that makes me very excited.”

Newton will next face reigning 205-pound champion Attila Vegh -- the only man to defeat him in the past four years -- in a bout to unify Bellator’s light heavyweight crown.

“After fighting Mo,” Newton said, “Attila ain’t got nothing for me.” 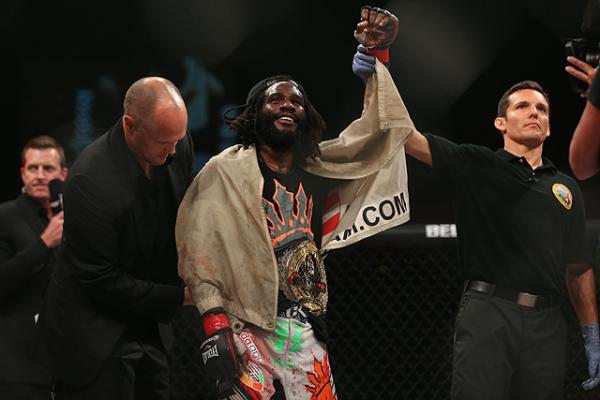 Photo: D. Mandel/Sherdog.com
Straus upset Curran to become Bellator
featherweight champion.
Daniel Straus recorded his 18th win in 19 outings, as he captured the Bellator featherweight championship with a unanimous decision over the world-ranked Pat Curran. All three judges sided with Straus (22-4, 8-1 Bellator) by 49-45, 48-46 and 48-46 scores, as he became the promotion’s fourth champion at 145 pounds.

Curran (19-5, 9-2 Bellator) never established himself in the match. Straus grinded on the 26-year-old in the clinch, struck for multiple takedowns and landed his share of meaningful strikes. The American Top Team representative left nothing to chance, as he saved some of his best work for the fifth round.

There, he mixed thudding knees with sharp punches and kept Curran on the defensive.

Curran, who had held Bellator’s featherweight title for nearly two years, was docked a point for an illegal knee strike in the third round, but the deduction did not factor into the decision.

“I worked really hard with my team at ATT,” said Straus, who lost to Curran back in 2009. “I want to thank everybody who has supported me since day one. Pat Curran is a tough dude. I will see him again. I know it.” 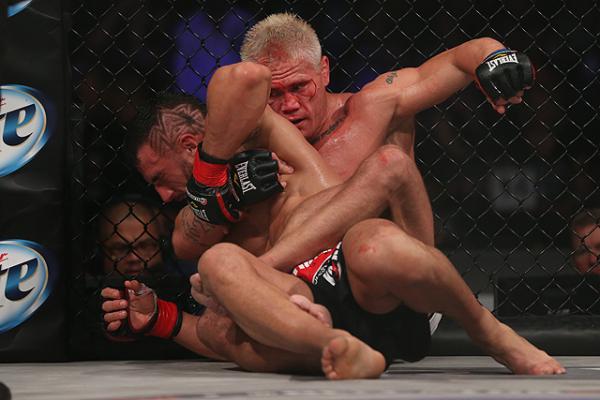 Bronzoulis (15-6-1, 0-1 Bellator) enjoyed some success early in the fight, particularly with leg kicks. However, Riggs adjusted, turned to takedowns and neutralized the onetime Legacy Fighting Championship titleholder for the better part of 15 minutes.

“Diesel” transitioned to Bronzoulis’ back on multiple occasions and fished intermittently for chokes. None were successful, but his approach proved fruitful.

“[Winning this fight] meant everything to me,” said Riggs, who has pieced together a six-fight winning streak. “It will take care of my family; they’re the only thing I do this for. I’m just happy for the opportunity. “Mike is harder than anybody in the tournament, so I’d like to get a title shot, but [Bellator CEO] Bjorn [Rebney] is the man. If he says he wants me to do it, then bring ’em on, baby.” 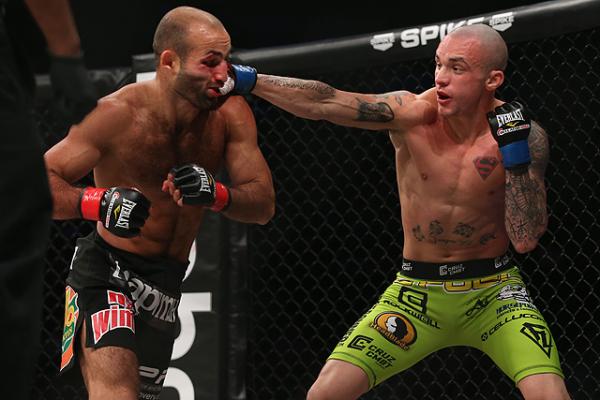 Photo: D. Mandel/Sherdog.com
Richman had an instant, violent comeback.
The Academy’s Mike Richman dispatched Akop Stepanyan with first-round punches in a featherweight showcase. Richman (16-3, 5-2 Bellator) closed out his Russian counterpart 4:05 into round one, as he won for the third time in four appearances.

Stepanyan (13-7, 1-4 Bellator) staggered the Minnesotan with a straight right late in the round, forcing him to retreat. Richman recovered and leveled the 27-year-old RusFighters Sport Club export with a left hook and followed him to the canvas, a double-handed chop in tow. Despite immediate protests from Stepanyan, referee Herb Dean had seen enough.

“This win felt amazing,” Richman said. “Guess who’s back? He hit me, but I wasn’t going down like that. I just started swinging and looked for that opening.” 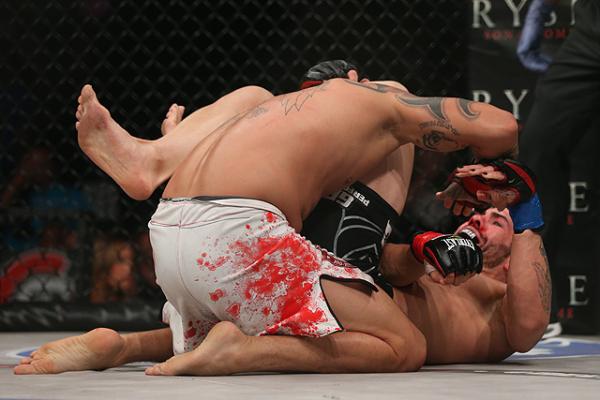 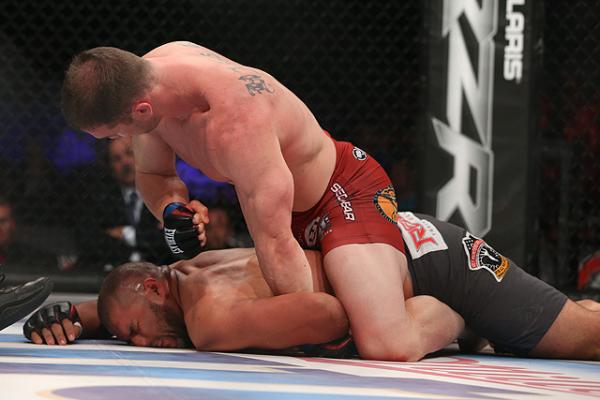