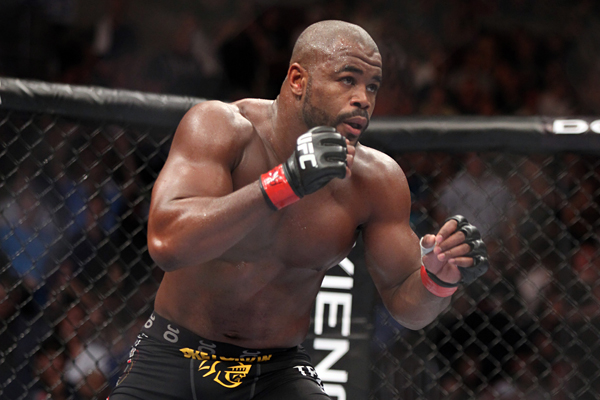 In a stellar all-around performance, Evans put all of his weapons to use and captured a lopsided unanimous decision from the previously unbeaten Phil Davis in the UFC on Fox 2 headliner on Saturday at the United Center in Chicago. Evans swept the scorecards by identical 50-45 counts, pitching MMA’s equivalent of a shutout.

Vastly superior striking, airtight grappling and superb defensive wrestling were all in play for Evans (17-1-1, 12-1-1 UFC), who will face Jones, his former Jackson’s Mixed Martial Arts stablemate, in the UFC 145 main event on April 21 in Atlanta, provided both men remain healthy.

“Now that I’ve won, I get the opportunity to fight Jon,” Evans said, “and I’m very excited about it.”

Davis (9-1, 5-1 UFC) was effective early in the first round with kicks to the leg and body and a nice right hand from the clinch. However, Evans shut down the 2008 NCAA national champion wrestler, securing a takedown of an ill-timed kick and later moving into a mounted crucifix position that had Davis squirming like a fish out of water. The scene repeated itself in the second and fifth rounds.

At a sizeable disadvantage in terms of experience, Davis had grown tentative by round two and threw his strikes with far less vigor. Evans capitalized, answering his opponent’s single shots with crisp multi-punch combinations. He was particularly sharp with his right uppercut and had Davis bleeding from the mouth midway through the 25-minute encounter. Most importantly, Evans stonewalled the four-time collegiate All-American’s takedowns and made him pay a hefty price for errant attempts. The only stone the man they call “Suga” left unturned was the finish.

“I felt like I wanted to put him away, and I just didn’t get the chance to land those big punches,” Evans said. “I’m kind of disappointed about it. When you’re fighting a guy as tough as Phil Davis, sometimes things like that happen.”

The polarizing Chael Sonnen won for the fifth time in six outings and secured his rematch with UFC middleweight champion Anderson Silva, as he took a unanimous decision from “The Ultimate Fighter” Season 3 winner Michael Bisping in the co-main event. All three cageside judges scored it for Sonnen (27-11-1, 6-4 UFC): 30-27, 29-28 and 29-28. The defeat snapped Bisping’s streak of four consecutive victories.

Sonnen attempted to impose himself on his foe from the start. He landed takedowns in all three rounds but had difficulty keeping Bisping (22-4, 12-4 UFC) on his back. The 32-year-old Brit routinely returned to a standing position, where he launched punches into Sonnen’s head and more than held his own in the clinch, often pinning the NCAA All-American wrestler to the cage.

Perhaps sensing the need to put his stamp on the fight, Sonnen did his best work in the third round. There, he struck for another takedown, transitioned to Bisping’s back, fished for the rear-naked choke and ultimately mounted him midway through the period. The damage he exacted was limited to punches to the body and a few elbows to the head. Bisping reclaimed guard, got back to his feet and scored with a takedown of his own in the final seconds. It was not enough to sway the judges.

All three cageside judges scored it 29-28 for Weidman (8-0, 4-0 UFC), who accepted the bout on just 11 days’ notice and endured a drastic weight cut in meeting the middleweight limit.

Weidman controlled much of the matchup with his striking, as he countered effectively and peppered Maia (15-4, 9-4 UFC) with kicks to the legs and punches to the body. He also scored with takedowns in all three rounds and attacked the decorated Brazilian jiu-jitsu black belt on the ground, threatening with chokes when Maia attempted to move into more advantageous positions.

Fatigue set in on both men in the third round, as they traded slow, looping punches with one another. Weidman, a two-time NCAA All-American wrestler at Hofstra University, opened a cut near Maia’s right eye with a series of knees from the clinch and battled through exhaustion to pick up the most significant victory of his career.