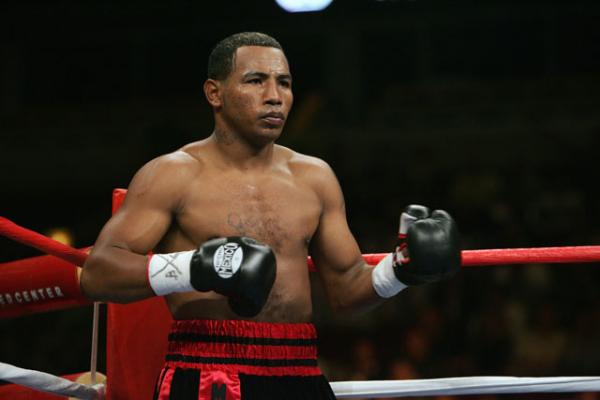 
Former boxing world champion Ricardo Mayorga's strangely-long-awaited MMA debut could hardly be described as “fireworks,” which is ironic given that notorious pugilist's bizarre victory in the main event of Omega MMA's “Battle of the Americas” was met with a literal (and elaborate) fireworks display.

Friday night at the Pharaoh's Casino in his hometown of Managua, Nicaragua, Mayorga managed to overcome his complete lack of grappling ability against unheralded opponent Wesley Tiffer, ultimately stopping the Canadian transplant with what appeared to be an illegal knee to the spine at the end of the second round.

The fight was originally conceived as a lightweight contest, then a 160-pound catch-weight before Thursday's weigh-in, at which Mayorga clocked in at 175.9 pounds. Tiffer, who claimed a 5-1 record entering the bout and hadn't competed since 2009, tipped the beam at 153 pounds. The 39-year-old Mayorga, who held world titles at 147 and 154 in the squared circle, looked every bit as physically terrible as the number on the scale suggested.

Mayorga was originally expected to debut inside the cage back in May 2010 in the headliner of the ill-fated Shine Fights “World Collide” against UFC veteran Din Thomas. “El Matador's” MMA debut never materialized as the North Carolina Boxing Authority canceled the show amidst shambolic circumstances, effectively killing Shine Fights as a promotion.

Mayorga was taken down by Tiffer after his opening salvo of punches and spent the vast majority of the bout's 10 minutes clinging to Tiffer, who held full mount and did little with it. On the sporadic occasions of Mayorga's escape, he was taken back down immediately after attempting to punch, right back into full mount.

The awkward-yet-tepid bout finally saw drama in the late second round when Mayorga bucked to escape from mount and rolled into a triangle armbar from Tiffer. Mayorga toughed his way through the hold and freed himself from Tiffer's subsequent armbar attempt with what appeared to be an illegal knee to the spine just before the round ended. Referee Milton Rosales Toshi did not call a foul, but after consulting with the cageside physician, Tiffer was deemed unfit to continue, giving Mayorga his first MMA win by stoppage at the end of the second round.

Post-fight, Mayorga jumped on the cage, played to the crowd and fist-bumped his robust posse as a full-blown fireworks display burst into the Nicaraguan night sky.

Elswewhere, unbeaten Bulgarian Krasimir Mladenov stayed perfect with a quick win in the evening’s middleweight co-main event. The 27-year-old wrestler needed just 2:06 to finish Guatemala’s O.J. Aguilar after hitting a double-leg against the fence and applying a keylock.

Wesley Tiffer student Erick Soza took out his Nicaraguan countryman German Rodriguez via rear-naked choke 4:15 into their bantamweight bout. At welterweight, Guatemala's Alejandro Rodriguez punched out Managua's Jurgen Gonzalez at 4:39 of the first round, while local Leonardo Morales restored Managuan pride by defeating Guatemalan featherweight Esdo Moises de Paz, stopping him on the ringside doctor's advice at 4:47 of the third round.

In the evening's 175-pound opener, Jose Castro flattened Pablo Acuna with a left hook 77 seconds into round three.