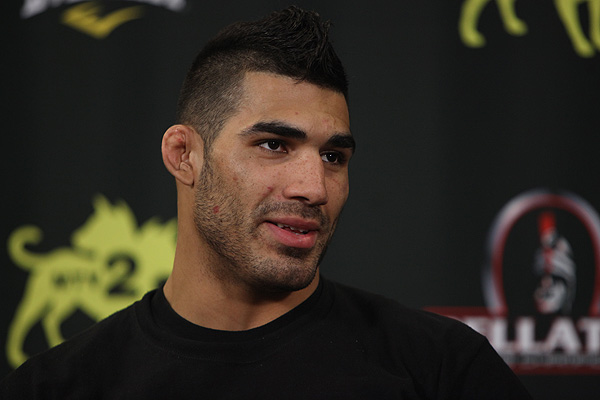 Lyman Good was not pleased with the outcome of his bout on Saturday night. | Photo: Dave Mandel


Cage Fury Fighting Championships 43 featured four title fights, as well as the return of instant replay in New Jersey, but the controversial main event between Lyman Good (16-3) and Jonavin Webb (7-0) overshadowed all on Saturday night.

The CFFC welterweight title headliner came to an abrupt halt late in the third round following an accidental eye poke suffered by Webb. After the physician took a look at the incumbent champion, the fight was stopped and eventually ruled a no contest.

New Jersey State Athletic Control Board head Larry Hazzard told Sherdog.com that the commission reviewed the instant replay video and opted not to overturn the referee’s call of an accidental foul due to lack of clear footage.

Good took the fight to Webb during the first 10 minutes, nearly earning a stoppage due to strikes. After the bout,Webb all but admitted defeat.

“This is not the way I wanted this to go. I don’t even feel like the belt is mine. I would love to fight Lyman [Good] again,” Webb said. “He is the strongest guy I’ve ever fought, and honestly this belt is his.”

The man known as “Cyborg” was less than pleased with the conclusion, as he clearly felt he deserved the technical knockout. But by rule, since the accidental foul occurred before three full rounds had been completed, the scrap was ruled a no contest.

“I couldn’t get my hands loose. I felt stiff as a board, so I had to wrestle him,” Williams said after the victory. “I knew he was tired, so I tried to stay on top of him.”

Williams did just as he said, using his superior wrestling to ground Stallings for the better part of 25 minutes. Stallings, who made one appearance for Strikeforce in 2011, caught his opponent with some shots later in the contest, but it was takedowns in the fifth and final round that were the difference, giving Williams his third consecutive win and the promotion’s 185-pound title.

In a minor upset, Plinio Cruz (7-5) bested Azunna Anyanwu (7-3) on the judge’s scorecards, taking a unanimous decision (30-27, 30-27, 30-27) to capture the CFFC heavyweight title. After taking two years away from competition, Cruz has stitched together two straight wins and can now call himself a champion. Anyanwu was hesitant to throw punches in his second CFFC title defense and it cost him, as Cruz was able to nullify “Zulu’s” four-inch reach advantage and land power punches.

Former Bellator MMA and World Series of Fighting competitor Jimmie Rivera (15-1) finished Anthony Durnell (14-5) with a vicious liver shot 3:22 into the third round to capture the CFFC bantamweight title. Rivera, who has won 14 straight fights, demonstrated his power throughout the contest, but Durnell hung tough until a low cross hook to the gut forced the hand of referee Gasper Oliver, stopping the fight in the third round.

Elsewhere, Jordan Stiner (9-1) defeated Jonathan DelBrugge (5-2) via unanimous decision (30-27, 30-27, 29-28). In a very evenly matched contest, Stiner proved that he is a viable fighter at 155 pounds with an impressive performance. The 28-year-old remains undefeated under the CFFC banner.

Ryan Patrovich (2-0) opened the main card with a unanimous decision (30-27, 30-27, 29-28) victory over Nicholas Willey (1-1). In a bit of a lackluster scrap, Patrovich was the more active of the two welterweights, earning him the benefit of the doubt from the judges.

In preliminary action, Caleb McAllister (3-1) got knocked down early against Robert Fabrizi (3-2), but managed to clear his head en route to a rear-naked choke victory at the 3:32 mark of round one. McAllister extended his current winning streak to three, all coming by way of submission.

Justin Bonitatis (2-0) awakened those in attendance with a spectacular punching display at the expense of Mike Cardona (1-1). There were multiple instances in the first two rounds where referee Gaspar Oliver could have stepped in and stopped the fight, as Bonitatis landed consecutive overhand right hands which “Taco” was unable to intelligently defend. But Cardona hung in, only to eat a big shot at 2:59 in the third round, which Oliver finally deemed worthy of stopping the fight.

In a classic battle of striker versus grappler, Evan Velez (7-2) defeated Sergio da Silva (3-6) via unanimous decision. While “The Savage” did manage to ground his opponent early, he wasn’t able to capitalize after exerting far too much energy in the opening frame. Over the next 10 minutes, Velez outstruck his 125-pound counterpart en route to 29-28 scorecards across the board.

Editor’s note: This article was updated at 9:48 a.m. PT on Nov. 2. The article originally stated that CFFC 43 marked the debut of instant replay in mixed martial arts; in fact, this was the first event to utilize instant replay since it was reinstated in New Jersey earlier this month. In addition, the article stated that officials used instant replay to confirm the foul, when in fact the NJSACB chose not to overrule the referee’s call due to lack of clear footage.