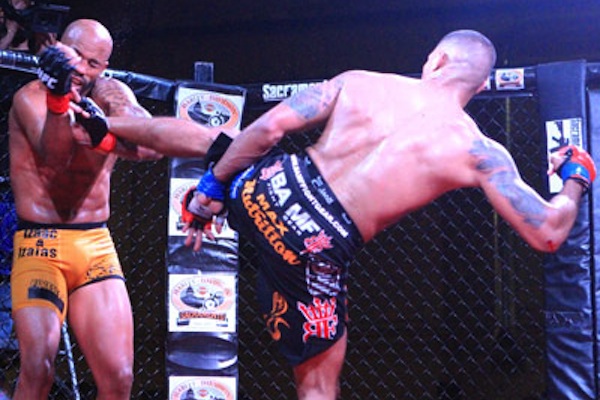 Roseville, Calif.'s Griffin was on fire from the start, walking through impressive power punches to land combo after combo on the Team Alpha Male fighter. It looked as though “Max Pain” was going to finish the bout with strikes on the mat in the opening frame, but Andrews survived the early onslaught to rebound in the second frame.

The champion Andrews spent a good portion of the round controlling Griffin against the fence and working ground-and-pound, but it was also the last time Andrews was close to having the upper hand in the contest.

Andrews answered the bell for the third looking visibly gassed and Griffin took over from there. The 27-year-old Griffin danced around and countered Andrews attempts at power shots with stinging combos each and every time, riding his superior gas tank to the championship and earning scorecards of 50-45, 50-45 and 50-47. Photo: Jeff Sherwood/Sherdog.com
Fili's aggression paid off.
Fili, the WFC featherweight champion, retained his title in dramatic fashion against game challenger Adrian Diaz of Stockton, Calif.. “Touchy” got touched early by Diaz's jab before taking his man to the floor and threatening with rear-naked chokes. Diaz's defensive wrestling proved more solid in the second round, but in the third, Fili came out aggressive with wild, swinging punches. Diaz tried to counter the champ but ate a hard right hand from the champ that put him down and out. The 22-year-old Fili swarmed with punches until referee Jason McCoy stepped in at 1:29, improving his MMA mark to 12-1.

“I want to cry, fighting is my life,” said an emotional Fili, before inviting the crowd to his house for an afterparty.

Fili's compatriot Avila had no trouble taking the vacant WFC lightweight belt, easily besting an outmatched Shad Smith, who replaced Isaac DeJesus in the bout on a less than a week's notice.

Avila unloaded body shots on the journeyman early before picking up the So Cal fighter with a double-leg, carrying him to the middle of the cage, slamming him and going to work from side control. “The Shark” then hopped on Smith's back and pounded away on him until referee Dan Stell called a halt to the action at 3:52 of the fight. With the win, Avila improves to 11-1.

Pittsburg, Calif.'s Justin Baesman topped Mikhail Venikov in their welterweight title eliminator, as “The Raw Deal” earned the tapout via rear-naked choke at 2:43 of the second round.

Venikov seemed in control most of the fight, stalking the Bay Area on the feet before putting him on the mat. However, when Venikov missed an attempted neck crank on the floor, Baesman swept him, took his back and sunk the rear-naked choke for the win, upping him record to 12-3. Venikov falls to 3-1.

At 165 pounds, Turlock, Calif.'s “Lethal” Lewis Gonzales did not live up to his nickname against Oregon's Emanuel Sanchez, relying on top position grappling and top control to coast to three 30-27 scores and a unanimous decision victory, making him 8-0 as a professional. Photo: J. Sherwood/Sherdog.com
Fili and Avila made it a good night for
Team Alpha Male's trophy case.
Alpha Male's Mario Soto easily outgrappled Charley Huston at 150 pounds, dominating from back mount before getting the rear-naked choke at 3:35 of round one, while his fellow featherweight teammate Daniel Romero took only seven seconds to earn a controversial stoppage of veteran Art Becerra. Becerra went down off Romero's first punch, sending Dan Stell into action immediately with Becerra protesting to no avail.

Welterweight Nick Christy was on the defensive early against Bellator vet Richard Rigmaden before “The KO Kid” landed an overhand right out of nowhere that put Rigmaden down at 2:07 of the first round.

It did not take long for href="/fighter/Ryan-Williams-133945">Ryan Williams to dispatch Kory Morford in their 210-pound catch-weight affair, needing just 81 seconds to punch out his opponent.

At lightweight, Jordan Bailey guillotined Anthony Charnell 1:42 into the first round, while Juan Quesada submitted Antoine Smith via rear-naked choke at 3:11 of the second round.

In amateur CAMO action, Anthony Hernandez armbarred Eric Smith 43 seconds into the second round of their lightweight contest; Benito Lopez landed an 80-second triangle on Michael Hutchins at 135 pounds; heavyweight Thomas Fallon knocked out Terrell Bosen in 91 seconds and Sam Gifford took a split decision over Roque Reyes at 145 pounds.