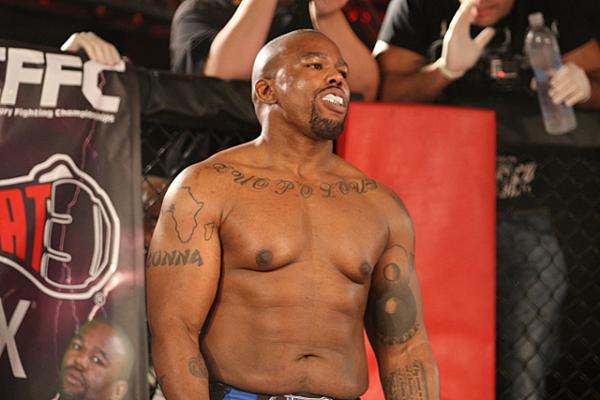 
PHILADELPHIA -- Oh, to be a heavyweight outside the Ultimate Fighting Championship.

It is a world of infrequent bouts, because there simply are not that many of you. Like the UFC, it is a platform of two extremes: in any given bout, you are probably either getting knocked out very quickly or plodding through to a decision.

Azunna Anyanwu has done the local heavyweight MMA circuit. Fighting since 2010, “Zulu” has had fights end early and go late on a record that now stands at 7-2. He had the opportunity to avenge one of those quick knockouts against Keith Bell on Saturday, when Anyanwu defended his Cage Fury Fighting Championships heavyweight belt in the main event of CFFC 37 at 2300 Arena.

Having been on the wrong end of a 12-second loss in their previous encounter, the Daddis Fight Camps product took a more measured approach early in the rematch. When the action got more frantic, though, the end came quickly, as Anyanwu connected with a big right hand that put Bell on the canvas. A few quick follow-up shots forced referee Dan Miragliotta to stop the bout at the 2:22 mark.

“I tried to actually forget about what he did, like it was a new fight,” Anyanwu told Sherdog.com after his title defense. “He fought an old ‘Zu,’ but now he was facing ‘Zu 2.0.’ He faced a guy that was 25 pounds lighter and faster and more explosive. I just blocked out of my mind what he did to me the first time and focused like it was a new opponent.”

What is the difference between “Zu 2.0” and the original? Beyond the weight loss, Anyanwu mentioned having “bad intentions,” as well as being quicker. He has also modeled at least part of his new and improved game after a UFC big man.

“Heavyweight division, one hit and it’s over, so you have to be more aware of what you do,” said Anyanwu. “I watch a lot of Daniel Cormier. He picks his spots. He doesn’t rush in there and club it out. The ones that don’t rush in there are the ones that are successful.” Anyanwu believes he is ready for a shot in the UFC and is acutely aware that prospects must “put on a show” to be noticed by the big league.

“People want to see an exciting fighter and knockouts and finishes. You can be a guy that’s beating people but not doing it impressively and never make it to the UFC, but if you put on a performance and people like your style, that’s a brand.”

The evening’s co-main event between lightweights Bill Algeo and Mike Pope ended almost as quickly as it began. An early clinch and subsequent scramble saw Algeo take Pope’s back. Moments later, “Mr. Perfect” latched on a rear-naked choke and forced Pope to tap at 2:51 of the opening round.

A very loud contingent came out to support Julio Rosario in his bantamweight bout against Brandon Inskeep. Rosario did find himself on his back at times during his fight, but Rosario remained active and scored with elbows from the disadvantageous position. Rosario overwhelmed his opponent in the standup department, eventually taking down Inskeep and securing an arm-triangle choke at 4:43 of round two.

The only woman’s bout on the card saw Rebecca Heintzman take on Katlyn Chookagian at strawweight. Over the course of the three rounds, Heintzman never really seemed to be hurt by Chookagian. Thanks in part to a marked size discrepancy, though, Chookagian was able to put Heintzman in precarious positions time and again. With Heintzman fighting off submission attempt after submission attempt, Chookagian ended up taking a unanimous decision (30-27, 30-27, 29-28) over “The Professor.”

Highly touted prospect Vladimir Cerbadji made his debut against one of the Four Star Hooligans, Shelby Graham. The bout ended up being fought at a catchweight after Graham did not hit the 145-pound featherweight limit, and it wore on Cerbadji as the fight went on. Despite his fair share of high points, “Koma” fell to Graham via split decision (29-28, 29-28, 27-30).

In another catchweight bout, Jay Haas stopped Evan Chmielski with punches at 3:13 of the first round.

With UFC vets past and present Pete Sell and Aljamain Sterling and in his corner, Chris Piriz took on Ricky Bandejas in a bantamweight bout. Piriz could not overcome the work rate of Bandejas, though, and he dropped a unanimous decision (30-27, 30-27, 29-28).

A featherweight battle between Phil Doig and Pat White ended in the opening round. Doig took advantage of a scramble to secure a neck crank, forcing referee Miragliotta to stop the bout at 4:47.

Prior to the start of the professional card, there were four bouts held under amateur rules. Those fights saw Scott Krampetz score a unanimous decision over Alex Sinprasith; Jonathan Romero take a unanimous decision over Keifer Flemming; Mariano Vidro-Rivera win on all three judges’ scorecards over Michael McCauley; and Brian Jones open up the festivities with a TKO victory over Jake Skelly.