PHILADELPHIA -- The Philadelphia Fight Factory may be the biggest gym in Pennsylvania, but that didn’t stop Scott Heckman from choking out the team’s Brian “Action” Jackson to take the vacant Locked in the Cage and the lesser-known World Mixed Martial Art Council featherweight titles Friday night at the National Guard Armory.

For two-and-a-half rounds, Heckman mixed good, old-fashioned ground-and-pound with solid footwork standing to out-maneuver and take down Jackson in the main event of Locked in the Cage 7 “The St. Valentine’s Day Massacre.” 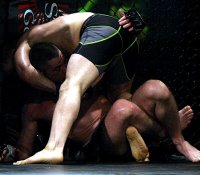 K. Mills
Heckman set up his brabo choke from
the front headlock.

“I’ve been working standup a lot,” Heckman told Sherdog.com after the bout. “Everyone knows if it goes to the ground, it’s my jiu-jitsu and wrestling background.”

“He definitely has some ground-and-pound. On the feet, he really circled away from me,” Jackson revealed after the fight. “It was a mental struggle for me to not go in and commit, and I kind of panicked the last round, tried to do the high kick.”

Two minutes into the third, Heckman put Jackson away, taking him to the floor and cinching up a brabo choke that forced the tap and earned Heckman the title.

“I still have to climb up the ladder,” continued Heckman, who hails from Bangor, Pa., and fights out of Revolution Academy. “There is still someone standing in front of me and a belt is just a piece of hardware. I’m going nowhere but up. I’m training hard with the best trainers and best coach.” 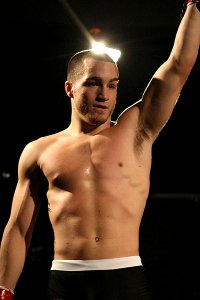 K. Mills
Albert Alvarez showed the speed and
power of his brother Eddie.

However, the Fight Factory didn’t go home empty handed. 20-year-old Albert Alvarez, younger brother of Bellator lightweight champion Eddie, won his second amateur fight with a blistering eight-second knockout. In spite of its amateur status, the bout was the easily the most anticipated of the card.

“That is the first time I knocked anyone out,” Alvarez told Sherdog.com after his triumph. “I always flash-K.O. people, but nothing like that. Level-change works all day: level-change, drop your hands, come back over with that hook.”

“I was looking down for the kick or to take his ankle. That is when he caught me,” said opponent Roy Smith, who took the bout on two weeks’ notice in front of the hardcore Alvarez fan contingent.

The question on everyone’s mind is: when will Alvarez turn pro and look to step out of his brother’s shadow?

“Whenever the circumstances are right,” teased Alvarez.

“I’ll talk to the owner of Fight Factory, Steven Haigh, and my brother. Whatever works out, I’m ready. I want to go places and push it, so I’m ready. ‘Stepping out of the shadow,’ maybe not so much, but I am definitely going to start my own path.” 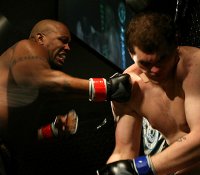 The show’s amateur portion, Alvarez aside, featured a dynamic Ryan Courtney starting the show off with a rear-naked choke 21 seconds into the second round of his fight with Justin Wagner.

Philly may not have the depth of teams and gyms that New Jersey does, but fighters from the City of Brotherly Love may be on the verge of making serious noise.