Advertisement
When Johny Hendricks meets Charlie Brenneman in a welterweight undercard matchup at UFC 117 Saturday in Oakland Calif., it will be the second time the two-time national champion and four-time All-American wrestler from Oklahoma State University crosses paths with the fellow grappler.

Hendricks and Brenneman faced off at the NCAA Wrestling Championships back in 2004, when Brenneman was a senior at Lock Haven University and Hendricks was a freshman at Oklahoma State. Hendricks won the consolation-round match, 11-1, and went on to finish fifth in the 157-pound weight class while the loss to Hendricks ended Brenneman's career.

In a past interview with the Sherdog Radio Network's "Beatdown" show, Brenneman said he remembered facing Hendricks. However, when speaking on "Beatdown" Wednesday, Hendricks couldn't say the same.

"I really don't remember all the people I beat, but I do remember the people I lost to," said Hendricks, who has finished five of his eight opponents. "I can remember their faces still today. So, I can see how he'd remember me. I won 128 matches and only lost 12 or 14 when I was in college, so those 12 or 14 losses, I can remember every one of those and how I lost. (Brenneman's) a competitor, so I can see how he'd remember how he lost." 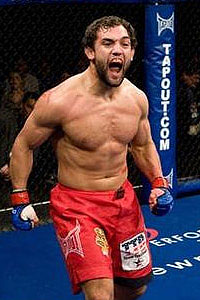 File Photo
Johny Hendricks
While Hendricks, who hails from Ada, Okla., is unbeaten in his MMA career, Brenneman brings a seven-fight winning streak into the matchup. He is coming off a unanimous decision win over 2009 Dream welterweight grand prix finalist Jason High at UFC Fight Night 21 in March. Brenneman’s only loss came to UFC veteran John Howard at a Ring of Combat event in 2008.

"I think (Brenneman) is the best wrestler I've faced so far and that's something I'm excited about," said the 26-year-old Hendricks. "I'm finally getting to train a different aspect of the game. This time, my training has been about me throwing hard punches and them trying to take me down and them trying to throw one or two punches and then taking me down while I throw punches at them."

Whether he wins or loses Saturday night, Hendricks said the Brenneman fight will make him better prepared to face the elite at 170 pounds.

"If you look at everybody in the top 10 at 170, a lot of them are (similar in style to Brenneman)," said Hendricks. "They're all heavy strikers who like to get the takedown and that's what I like to see. As I start moving up (the division), those are the kind of guys I'm going to be facing and this fight is a good preview of what I need to be working on to get myself a little bit better so that I'm a little more prepared for the top guys."

Even though he already has eight pro fights, Hendricks said he's just now starting to feel comfortable with MMA.

"I'm starting to believe this is where I belong," said Hendricks. "There for a while, I thought I was too young for this sport and I just wanted to get a couple more fights. Now I'm ready to make that next step. In wrestling, it's sort of the same way. You go in your freshman year and you wonder if you can make the adjustment because then you're wrestling guys who are 23 or 24 years old. After I made All-American as a freshman, I felt like I did belong there. That's what the last couple of fights have been for me and now I feel like I do belong here."
Related Articles
Latest News
ALLUFCBELLATORPFLONE