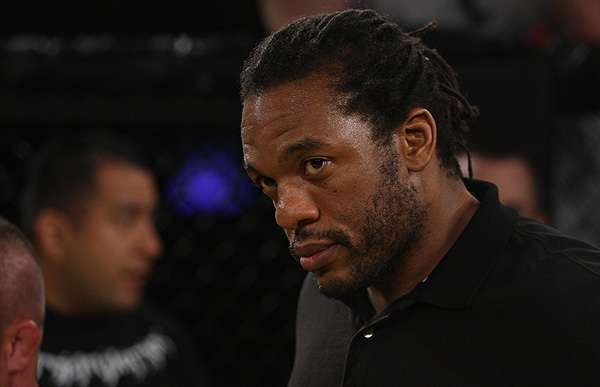 Herb Dean will be the third man in the Octagon for the UFC 182 main event. | Dave Mandel/Sherdog.com


Veteran referee Herb Dean will oversee the action in the Octagon when Jon Jones defends his light heavyweight title against Daniel Cormier at UFC 182.

The Nevada Athletic Commission announced the assignment during its monthly meeting on Friday. Marcos Rosales, Cardo Urso and Tony Weeks will have judging duties for the bout. Dean will receive $1,500 for the fight, while Rosales, Urso and Weeks will earn $1,200 apiece.

UFC 182 takes place at the MGM Grand Garden Arena in Las Vegas on Jan. 3 and also includes a pivotal lightweight showdown pitting Donald Cerrone against Myles Jury in evening’s co-headliner. A welterweight clash between Hector Lombard and Josh Burkman will also take place on the main card, which is available via pay-per-view.

Dean has not refereed a Jones fight since April 21, 2012, when the 205-pound king defeated Rashad Evans via unanimous decision at UFC 145. Dean was in the cage with Cormier for the American Kickboxing Academy’s promotional debut, a three-round verdict over Frank Mir at UFC on Fox 7.

Cormier, who turned 35 in March, was granted a license to compete by the commission on Friday. The Strikeforce veteran appeared via telephone and was briefly questioned by the commission about his interactions with Jones since their infamous media day brawl in August.

“We haven’t spoken or come in contact with each other, but we did have another press conference and it went off without incident,” Cormier said. “It was exactly what the first one should have been.”