Returning to the cage after a five-year absence, the godfather of UK MMA looked focused from the first bell. Crushing leg kicks kept Rodriguez at bay and Freeman comfortably handled the former UFC champ’s takedown attempts. The end came when Freeman landed another hard leg kick and Rodriguez dropped to the canvas in obvious pain. “The Machine” unleashed a volley of punches, forcing referee Marc Goddard to intervene at just 2:11 of the first round.

An obviously emotional Freeman scaled the cage and milked the acclaim of the Yorkshire crowd. Freeman is now the owner of the UCFC legends heavyweight title, but exactly how much support there is for a full-blown comeback is debatable. Despite the promise of an MMA extravaganza backed by a music festival featuring chart topping acts, only a few hundred people turned up at the Doncaster Rovers football stadium.

Rising local star Scott Askham defended the promotion’s 185-pound title against Jack Marshman, earning a unanimous decision to move to 11-0 as a pro. Marshman looked dangerous in flashes when he was able to let his hands go, but Askham remained calm, keeping it at range on the feet and working conservatively from top position on the ground. When the result was announced, Askham pronounced he was ready for the UFC and may soon get his wish.

UFC veteran Colin Robinson showed his experience as he saw off the challenge of Darren Towler. The pumped-up Towler sprinted to the cage and looked to get things over quickly by throwing bombs early. The writing was on the wall when Robinson was docked a point for holding Towler’s glove. As referee Neil Hall separated the combatants, the exhausted Towler slid down the fence to grab a breather. Seconds later, the match was over as “Big C” piled it on to get the stoppage at 4:35 of the first frame. 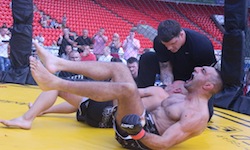 M. Bower
It was a sparse crowd in Doncaster.
Dutchman Harry Duiven looked every inch the former pro boxer as he was manhandled by unbeaten heavyweight bruiser Karl Etherington. Duiven appeared to have minimal grappling skills and avoided being submitted due to luck and toughness. The pivotal moment of the sloppy contest came when Duiven escaped a standing guillotine attempt and Etherington slipped face down to the canvas. Duiven delivered a fight-ending blow to his downed foe and the fight was waved off. However, Duiven’s celebrations were short-lived, as referee Neil Hall ruled that the punch had landed on the back of the head. Duiven was disqualified at 4:14 of the first round.

Featherweight Zi Shah persisted with a rear-naked choke attempt, eventually extracting the tap from Khaled Radman at 4:04 of round one, while Sheffield boxer-turned-MMA fighter Danny Tombs also got it done in the first frame, pounding his way to victory over Ryan Boyd at 3:24 of their middleweight bout.

Serbian K-1 vet Dragan Pesic showed another side to his game, submitting featherweight David Stone with an armbar in just 27 seconds.