Ayaka Hamasaki (right) had too much for youngster Mizuki Inoue. | Photo: Taro Irei

Taking advantage of the fact that a hesitant Inoue expected a barrage of takedowns, the Abe Ani Combat Club wrestler surprised by tempting fate to trade punches early with the 17-year-old firebrand.

“I didn’t think I would have been able to strike with her,” admitted Hamasaki, 29, post-fight. “She’s already a very good striker herself, so I didn’t think that I would beat her that way. I did intend to give her a few shots, of course, particularly when my corner instructed me to, so I really only did it then.”

Hamasaki landed her fair share on the dangerous karateka before putting Inoue on her back with a double-leg takedown. The ground position would become a familiar one for both, as Hamasaki constantly passed from half-guard or attacked with punches and knees to the body from side-control. Full of youthful energy, Inoue didn’t stay still on the bottom, bucking and squirming out of optimal position any time Hamasaki began looking for submission setups.

Inoue fared somewhat better in the latter half of the second and final frame, mashing short punches, low kicks and knees into Hamasaki from the clinch. However, it wasn’t long before Hamasaki again put her on her back, finishing out the round on top in half-guard while hunting for a keylock.

“She’s quite strong,” said a humble Hamasaki. “She’s capable in all areas, striking and grappling. I wanted to win by submission but I just wasn’t able to with her.”

Both women started the bout sniping with jabs at range, but Ishikawa had one distinct advantage: long-range, multi-level kicks which mashed the Valkyrie champ from range. In time, Ishikawa’s hands also proved superior, as she landed harder and more accurate shots, wobbling Tamada with sharp counters in both five-minute rounds. Tamada had several takedowns in the final frame, but they couldn’t stack up to the damage piled upon her, thus prompting judges Yamazaki, Oshiro and Matsumiya to give Ishikawa the nod. 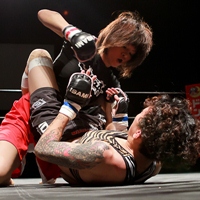 T. Irei
Sugiyama edged Saito.
Meeting Ishikawa in the Dec. 17 semifinals will be Naho Sugiyama, who took a decision win over Ayumi Saito in a close fight which pitted Sugiyama’s clinch and grappling work against her opponent’s blistering punch combinations. “Edge” put a number of stiff shots on Sugiyama’s face, changing things up with digging hooks to the body and uppercuts in the second frame. “Sugi Rock,” on the other hand, braved the fire to press Saito up against the ropes, scoring occasional takedowns and briefly securing dominant position before being stood up. This was apparently enough to convince judges Yamazaki, Matsumiya and Oshiro to cast their ballots in Sugiyama’s favor.

On the other side of the bracket, Misaki Takimoto’s superior striking saw her outpoint Miyoko Kusaka, punching Takimoto’s ticket to the semis. Given Kusaka’s rather one-dimensional tactic of pressing straight forward for takedowns, Kusaka was left open to eating punch combinations followed by head and body kicks. The karateka dropped Kusaka with a stiff left hand in the second period for a knockdown count. Given Takimoto’s superior control on the feet, judges Oshiro, Yamazaki and Matsumiya unanimously voted for the Zendokai product.

Lastly, mini-wrecking ball Yukiko Seki bull-rushed Sachiko Yamamoto to lock her place across from Takimoto in the tourney semifinals. Seki blazed forward with barrages of punches, looking to overwhelm “Sachi,” who tried for takedowns to slow and control the bout. Seki was indomitable however, reversing on the canvas to take top position, bullying with punches to the body and to the face when on the feet. Judges Oshiro, Matsumiya and Yamazaki also unanimously cast their ballots for Seki.

After three and a half years away from MMA competition, Emi Tomimatsu made a successful return by handling Team Hellboy Hansen’s Celine Haga.

Haga played a conservative game, circling away while throwing punches to keep her opponent at bay. Unmoved by Haga’s striking or power during her more wild punches, Tomimatsu pushed forward to bully in the clinch with knees and takedown attempts. By way of this simple application of forward pressure, Tomimatsu took the fight on judges Yamazaki, Oshiro and Serizawa’s cards, handing Haga her fifth consecutive loss. 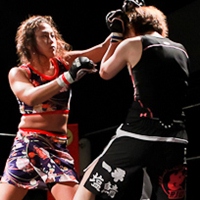 T. Irei
Oya and Naito went back and forth.
In a very competitive opening round, both Yuko Oya and Akiko Naito traded dominant positions in full- and back-mount, with neither woman being able to lock a submission or drop more than a few perfunctory punches. The second frame was just as competitive, but saw Oya edging “Betiko” in positional dominance on the canvas -- not at all noticing the magnitude 3 tremor that jolted the venue during the round -- allowing her to drop punches from mount and side-control. Judges Yamazaki and Oshiro submitted scorecards for “Amiba,” with judge Serizawa instead favoring Naito.

Returning from a successful March surgery to treat cervical cancer, Rina Tomita’s disciplined submission offense bested Anna Saito’s wild punches, eventually putting the shorter fighter away by technical submission in the first frame. Saito’s haymakers connected on the defensively porous Tomita, but once Saito took the fight to the ground, she put herself firmly in her opponent's territory, having to escape triangle, guillotine and rear-naked choke attempts. Referee Oshiro saved Saito from the subsequent armbar however, stepping in at the 4:24 mark.

The win was an emotional one for AACC product Tomita, who expressed tearful gratitude to her fans and parents for supporting her through her bout with cancer.