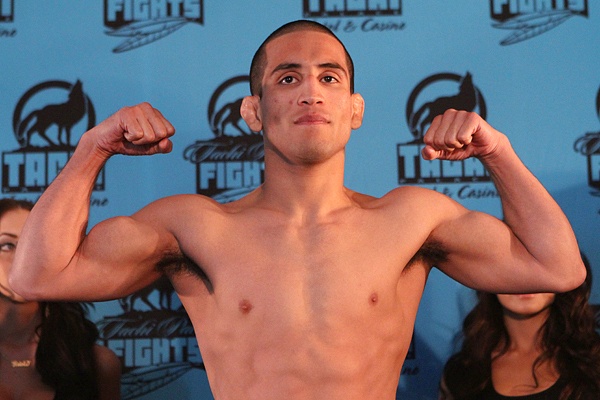 Joe Soto received a message from college roommate Jon Jones a few years ago, which simply said, “Hey, man, I think we are both gonna make it to the UFC one day.” It now falls on Soto to fulfill the remainder of that prophecy, and he seems to be well on his way.

The 26-year-old Nor-Cal Fighting Alliance representative will meet Cory Vombaur in a bantamweight bout at Tachi Palace Fights 17 “Fall Brawl” on Thursday at the Tachi Palace Hotel and Casino in Lemoore, Calif. The entire event will be streamed to Sherdog.com.

Soto roomed with and wrestled alongside Jones for two years at Iowa Central Community College. Both dabbled in mixed martial arts, an interest which had carried over from their high school days.

“Before I went to school, I was kind of interested in MMA. I just didn’t know where to train,” Soto said. “Then I met Paul Estrada through a friend who knew I was in wrestling and was interested in MMA. After I was introduced, I went to his house to train, and he tapped me out, so I started training with him right after high school, but then I went to college. In college, a few of us messed around in BJJ in the wrestling room. There were a couple other fighters in that town, and Jon and I were both a little interested, but it wasn’t until after we graduated from college that I really started training.”

Soto took his first professional fight a year later, winning by technical knockout. He won his first nine fights and received the nickname by which he remains known today.

“‘The Hammer’ was given to me in my second fight,” Soto said. “The promoter just threw it on me. When I went out to the ring, they just announced me that way. Don’t know why they gave it to me, but it just kind of stuck.”

As part of the nine-fight winning streak to start his career, Soto became the first featherweight champion in Bellator MMA history, capturing the title with a rear-naked choke submission against Yahir Reyes at Bellator 10 in June 2009. A little more than a year later, he defended his crown against Joe Warren and suffered his first defeat, losing by second-round knockout.

“I was doing really well in the first round,” Soto said, “but I got caught in the second.”

Worse yet, Soto suffered a detached retina in the bout -- an injury that threatened to derail his career. He spent the next 11 months on the sidelines. After losing to Eddie Yagin in his return match, Soto dropped to 135 pounds and has since posted back-to-back wins by submission. His deal with Bellator now expired, Soto has his eyes on a higher prize: a contract with the Ultimate Fighting Championship.

“I am not really wanting to go back to Bellator,” Soto said. “My goal now is to make it to the UFC. Sure, I’d love to face Warren again, but not for Bellator. I would want to face him again if we both went to the UFC. The Bellator format is good, but they lowered their pay a bit and their tournaments are only four-man [competitions] now.”

Soto likes the way the MMA market has developed.

“It’s good for the sport for the UFC to have the competition,” he said. “More competition between organizations like the UFC, Bellator and World Series of Fighting will hopefully drive up the pay for the fighters. It’s overall good for the sport, but the UFC has always been a dream of mine, ever since I was a kid when my uncle used to watch with me, so I’m done with Bellator.”

With that goal in hand, Soto faces Vambaur, an NCAA wrestler based in Vancouver, Wash. Vambaur has compiled a 6-2 record in various regional promotions.

“I know he’s a really good wrestler,” Soto said. “On paper, he may be better as a division one NCAA wrestler, and he has some amateur boxing experience. He is a skilled athlete, and it will be interesting matchup because I’m a good wrestler, too. I haven’t seen much video on him, and I do like to have some kind of idea of what he likes to do -- see his hand-speed, whether he throws fast or hard, how good is his wrestling -- and you can sometimes see a little bit of that on video.

“At the same time, though, it’s good not having that information, because then you’re less likely to underestimate your opponent,” he added. “I have to assume the worst, so I have to be on my toes a lot more. If I win this fight, my eyes are just set on getting into the UFC, and my manager Tom Call has been working on that. I’m focused now on getting back on the streak, taking care of business in the cage and winning impressively to catch the eye of UFC.”