Jon Jones continued his impressive run in the UFC light heavyweight division Sunday by knocking off Brandon Vera via TKO in the first round of their main event clash at UFC Live in Broomfield, Colo.

“I knew he’d be a step up in competition,” said Jones, “and I trained to the point where I felt as if I won it before I got in here.”

Jones rushed right out on the starting bell and tied up Vera, a technical Greco-Roman wrestler, before tossing him easily to the mat. Vera launched Jones off and got right back to his feet.

The 22-year-old phenom would not be denied and took Vera back to the mat with another impressive takedown. Vera seemed comfortable on his back as he inched his guard up Jones’ back while trying to trap an arm for a submission.

As Jones postured up to clear his arm, Vera shot an illegal kick to his jaw while Jones was grounded. Referee Herb Dean immediately halted the action. Jones eventually relayed his willingness to continue, and Dean restarted the bout in the same position with Vera down a point on the scorecards for the foul.

Jones wasted little time after the action recommenced. The New York native blasted Vera with a wide left elbow that spun the already downed fighter to his stomach, writhing in pain. Jones then pounced and pounded away until Dean pulled him off at 3:19 of the opening stanza.

“I studied him night and day,” said Jones. “I studied all his footage. I almost felt as if I knew him before I stepped in here with him.”

Another Big Win for Dos Santos

Junior dos Santos answered any remaining questions about his standup acumen with a decisive knockout of former UFC heavyweight challenger Gabriel Gonzaga in the first round of their co-main event fight.

After a slow start, dos Santos seemed to find his range and began going to the body. Gonzaga, a jiu-jitsu black belt, tried to get the fight to the mat, but he was rebuffed by dos Santos, who has yet to spend any significant time on the ground in the UFC.

The Brazilian striker found his mark with a left hook counter and dropped Gonzaga to the mat before closing in for the kill. Dos Santos blasted his foe with punches until referee Josh Rosenthal came to the rescue at 3:53 of the initial round.

“I (threw) my punch when he kicked me, and that’s it,” said a victorious dos Santos.

With the win, the once-beaten heavyweight thrust himself into the title hunt in the UFC’s marquee division. 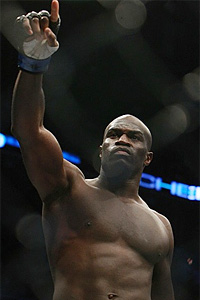 Cheick Kongo stopped veteran heavyweight Paul Buentello by strikes in the third round of a very one-sided affair. Buentello seemed ready for a striking duel with the Frenchman, but Kongo had other ideas.

After the initial exchange, Kongo continuously took down a helpless Buentello and battered him on the mat. The only thing that could slow him down was the illegal knee he delivered to a downed Buentello in the second round. Referee Herb Dean stepped in and docked a point, but it would become academic shortly thereafter.

Kongo took the fight back to the ground in the final frame. After taking dominant position on Buentello’s back, he elbowed his thighs until the former UFC heavyweight title challenger had had enough. Buentello tapped out at 1:16 of the period.

Alessio Sakara ended James Irvin’s night with a hard left hook to the right eye in the first round of their middleweight contest. Irvin immediately backed away, grasping his eye as if he was poked. Sakara followed him back against the cage and to the canvas before referee Josh Rosenthal stepped in and separated the fighters.

Irvin protested that he was poked in the eye, but subsequent replays showed the strike had been the closed left fist of Sakara. After a short discussion between the ringside physician, Irvin and Rosenthal, it was determined that the strike was legal and the fight was ruled a TKO in favor of Sakara at 3:01 of the opening frame.

The Italian boxer used good footwork to set up hard punches to the head and body of a flatfooted Irvin throughout the three-minute bout. He landed a number of solid left hand leads, including the fight-ending punch, as the two exchanged exclusively on the feet in the short fight.