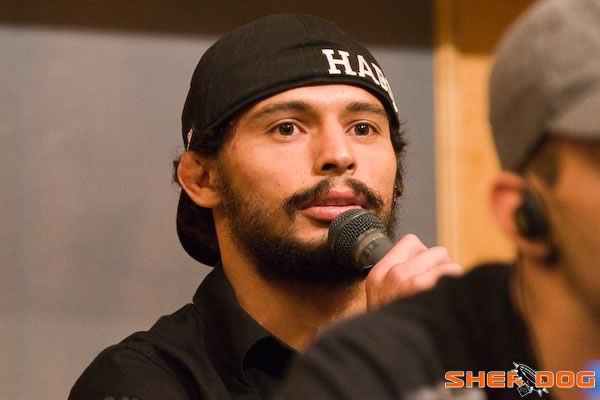 Adriano Martins was on a good run in Brazil, with only one loss in his last 11 fights, a span which also saw him capture the Jungle Fight lightweight title. After his latest defense in March -- a 62-second stoppage of American Jimmy Donahue -- the chance to fight abroad again seemed palpable. On Thursday, Martins’ managers, Alex Davis and Samir Nadaf, confirmed to Sherdog.com that Martins has signed to compete in the Strikeforce lightweight division.

While still unannounced, Martins is rumored to jump stateside Sept. 29, when he’ll meet Greg Jackson product Isaac Vallie-Flagg in Sacramento, Calif. In an exclusive interview with Sherdog.com, the 30-year-old from Manaus, Amazonas, analyzed his new home’s 155-pound division, discussed preparations for his debut, and explained why he opted for Strikeforce over the UFC.

Sherdog.com: How is it to be back fighting abroad, and in an event like Strikeforce?
Adriano Martins: I had fought in Dream, and now I’m in Strikeforce -- for me, that’s already a landmark. I will represent Manaus in an event like this. It’s a long process; it’s been 10 years already. This is a new stage of my life and I embrace the opportunity.

Sherdog.com: Will the training camp for your debut be at Top Life in Amazonas?
Martins: Yes, it will be done around here. Professor Valdecir Silva of the Brazilian national team will be the wrestling coach. Boxing will be with Erminio and Cassio. Jiu-jitsu will be at the gym with my students. The MMA part will be with [Junior] Cardoso, a guy who has trained me for a while. We’ll also bring in Moacir [Mendes] from Porto Alegre to train kickboxing.

Sherdog.com: Have you thought of training wrestling abroad, or bringing someone to Brazil?
Martins: No, not yet. I’ve trained enough wrestling tin the gym and I feel good here. We don’t want to change a lot now, since things have been working well, but maybe in the future we’ll think about having a camp abroad.

Sherdog.com: How do you see the lightweight division in Strikeforce? Can you evaluate it?
Martins: I’ve seen a little. I know that Gilbert Melendez is the champion. I’m going to work to be No. 1, work to win there. I was in talks with the UFC, but the lightweight division there is jam-packed. Even Melendez himself isn’t there yet. They gave me the option to fight in Strikeforce. I’ll do my duty, seek victory against Isaac and work to get to the top. I’m happy where I am now.

Sherdog.com: But it’s undeniable that the eyes of the UFC will be focused on you even more, since Strikeforce is also owned by Zuffa.
Martins: Yes, of course! That’s why we have to work hard there, because I want the best, and everyone knows that the UFC is the best. It’s a dream, and I will fight for it.