WARSAW, Poland -- In what was billed as the first fight for the newly created KSW international championship, crowd favorite Mamed Khalidov scored an emphatic victory Friday over Pride veteran Daniel Acacio, knocking him out in just 70 seconds.

The Chechen opened up with a kick and tripped Acacio, but the Brazilian scrambled back up. After the referee broke the clinch, Khalidov tried his trademark flashy kicks, but they either missed or were blocked. It was an overhand right 52 seconds in that cracked the Chute Boxe fighter’s defense and allowed Khalidov to attack him with a barrage of strikes. Among those was a right uppercut that floored Acacio. With the Torwar Hall arena going wild, the Grozny native sealed the deal with additional punches to become KSW’s inaugural champion.

Despite the quick outing, Khalidov said the Brazilian did give him some trouble.

“I believe that was a right hook he hit me with when I shot in,” said Khalidov, who is in negotiations with World Victory Road. “The plan was to fight standing up but not avoid the ground.”

Antoni Chmielewski had an opponent change on extremely short notice for the second time in a row. His original opponent, Petr Ondrus, was replaced by Michael Knaap. Chmielewski did not seem too worried in the fight, however, as he took down Knaap at will and held him on the ground. 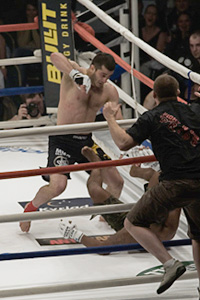 Maciej Okraszewski/Sherdog.com
Khalidov KOs Acacio.
In the first round, the Pole was rather conservative with ground-and-pound. Knaap, from Holland, finally found a window in the stand-up in round two, cutting Chmielewski on the top of his forehead, but Chmielewski’s demeanor changed after getting the next takedown. Knaap had to fight off some powerful shots and, in the dying seconds, submissions, including a Peruvian necktie, but he made it through 10 minutes. After two rounds, all three judges awarded Chmielewski the victory.

KSW stalwart Lukasz Jurkowski made his return to the ring after a long break against Atila Vegh and did so on only two and a half weeks’ notice. Vegh quickly got a trip takedown and passed to side control, where he did just enough to avoid getting stood up. Jurkowski managed to sweep his opponent a few minutes in and wisely returned to the feet, where he was winning the exchanges.

Round two began in similar fashion, as the Hungarian got the fight to the ground and established side control. His lackadaisical attack this time caused a standup, and that played right into the Polish fighter’s hands. Jurkowski scored points with a crisp one-two combination and even managed a takedown of his own that ensured his decision victory.

“The fatigue wasn't visible because it was not to be seen,” said Jurkowski, who freely admitted before the fight that there wasn't enough time to get in really good shape. “Had I shown that I'm gassing, Atila [Vegh] would push the fight more. But to be completely honest, midway through the second round the tank was empty and I had to move around a bit, eat up the clock.”

The revamped tournament in the middleweight division saw only the first two rounds play out Friday while the finals are scheduled for December. Vitor Nobrega made quick work of Lukasz Christ and Artur Kadlubek, beating them both in the same way. He got the takedown, passed to side, to mount and then worked an arm triangle he used to tap both. Kadlubek had won his first fight with Sergei Nikitin by a comfortable decision, getting mount and back numerous times but without finishing the Russian.

Nobrega's December opponent will be Aslambek Saidov, Khalidov's teammate at Arrachion MMA Olsztyn, who defeated Michele Verginelli by decision in the first match. Saidov used his wrestling to get positional advantage and skillfully defend the Italian's submissions from his back.

Krzysztof Sadecki defeated Andre Reinders by decision in a fight that left both fighters exhausted after trading blows in the stand-up for 13 minutes. Sadecki didn't walk out for his semifinal and was replaced by Lukasz Christ. Christ and Saidov had a back-and-forth fight with plenty of scrambles that saw Saidov attempt at least three leglocks. He finally submitted Christ, albeit with an armbar, with seven seconds left in round one.