Koyama pounded out a second win over Shinji Sasaki in just 80 seconds in the main event of "Shootor's Legacy 1" to earn the title. However, the stoppage appeared premature. Both fighters started the fight sticking stinging jabs into each other's faces, with Koyama the harder hitter. Eventually, one of his stiff jabs put Sasaki on rollerskates, sending him posterior-first into a corner.

Koyama lunged to finish, and though his follow-up punches were landing, they were not particularly dangerous or effective. Nonetheless, referee Toshiharu Suzuki stepped in to call the stoppage, just as Sasaki put out an arm to pull down Koyama to control the distance. The stoppage seemed all the more inappropriate given their first fight in November 2006, in which Koyama brutally punished Sasaki to a decision in a fight that featured a 20-15 scorecard.

"If I lost this fight, I thought I would retire. It's like a dream come true for me," said the newly minted champion after the bout, through tears. "Thanks to everyone, friends, training partners, for supporting me. I didn't say it to anyone yet, but ... Happy New Year!"

Another Pacific Rim champion, 143-pounder Taiki Tsuchiya, took home "Fight of the Night" honors in less than five minutes, as he destroyed former King of the Cage champ Tony Hervey in thrilling fashion. 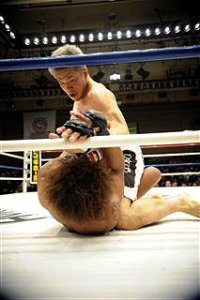 Hervey impressed early with flashy jumping front kicks and a capoeira spinning half-moon kick. The less showy Tsuchiya returned fire with fully loaded right hands, bullying Hervey into the corners and eventually dropping him in one. Though Hervey's instincts saw him repeatedly escaping under the bottom rope and ultimately out of the ring, referee Suzuki nullified these escape attempts by resetting both men inside the ring, both times with Hervey remaining on the bottom. Fully postured up in half guard, Tsuchiya laid the punches on thick. Though Hervey did not appear dazed or close to being finished, his inability to escape or defend ultimately sealed his fate. Just as Hervey gave up his back, Suzuki decided he had seen enough and called the bout at the 4:25 mark.

"I thought I'd challenge [Shooto world champion Hatsu] Hioki, but I saw his Dec. 30 fight against Marlon Sandro and it makes me think I'm not ready yet," Tsuchiya mused after the bout. "So sorry to everyone expecting me to challenge him."

Former Shooto 132-pound world champion Masakatsu Ueda put away late replacement Ralph Acosta with his trusty brabo choke in the second period after a riveting first round of grappling.

Acosta, who replaced Farkhad Sharipov on less than a week's notice after Sharipov could not secure a visa, made quite the impression on the local crowd, explosively putting the stalwart wrestler Ueda on the mat. However, always a cool customer, Ueda fought back to his knees and, from the front headlock, gripped a tight brabo choke, prompting a catch call from referee Suzuki.

The Bellator vet gutted out the attempt, as Ueda looked to cinch the choke but was not nearly out of danger. The former champion doggedly tried once more, re-locking the choke tight, with Acosta only being saved by the bell. The third time was the charm for Ueda, however. After tagging him with a right hook, Ueda forced Acosta to shoot a single, which Ueda deftly countered with another brabo choke. This time, there was no bell in sight, and Acosta was forced to tap at 1:13 of the second round. 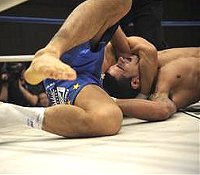 P. Benjamin
Third time was the charm for
Ueda's brabo choke.
Kotetsu Boku took a solid unanimous decision (30-26, 30-28, 29-28) over Yukinari Tamura. Tamura exploited Boku on the floor in the first and second periods, putting him on his back for brief spells. Realizing that was not how fights were won, the Krazy Bee fighter stepped up his takedown defense and chased down Tamura with frustrating jabs and powerful rights. Shutting down Tamura's subsequent shots, Boku outpointed a fatigued Tamura on the feet before nearly finishing him off with a powerful right hand and subsequent barrage late.

Yusuke Endo and Daisuke "Amazon" Sugie had a slow start, as Sugie struggled to put Endo on the floor and fell behind to Endo's superior punching. However, the lightweight encounter took a rousing turn for the better in round three, as both men put on a high-paced, back-and-forth grappling match that saw them trade top position repeatedly. "Amazon" dropped Endo early with a hard counter, but Endo pursued submissions late in the fight to put Sugie on the defensive. However, Sugie's last-round salvo could not overcome his lackluster opening 10 minutes. Though judge Tadashi Yokoyama scored the bout a 29-29 draw, judges Toshiharu Suzuki and Kosuke Watanabe gave the bout 29-28 and 30-27, respectively, to Endo, who took the majority decision.

Flyweight veteran Shinichi Hanawa surprisingly outslugged the wild Toshimichi Akagi, who bested him in September 2006 by unanimous decision. Akagi made a late surge, taking full mount in the waning moments of the bout, but it was Hanawa's endless combination punching, tagging Akagi over and over, that earned him the unanimous decision (20-19, 20-18, 20-18). After starting his career at a measly 2-6-1, the 33-year-old Hanawa has won six of his last seven fights. 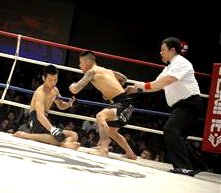 In rookie tournament action, Hiroshi Osato came on strong late to win a unanimous verdict (20-18, 20-19, 20-19) over Takeshi Saito, punching his ticket to the quarter-finals against Isao Yoshida at 123 pounds.

In the 143-pound bracket, Chuji Kato and Kensuke Nakamura fought to a majority draw (20-19, 19-19, 19-19), but two judges voted for Kato to advance to the tournament quarter-finals, where he will face Yoshinori Suzuki.

The opening round of the 132-pound rookie tournament saw Shinichi Yoshioka impressively outstrike Hiroshi Nakamura to earn a unanimous decision (20-18, 20-18, 20-18), while Takuya Ogura knocked Satoshi Kogure senseless at 2:39 of the first round with a vicious knee. Yoshioka and Ogura will square off in the quarter-finals in the coming months.