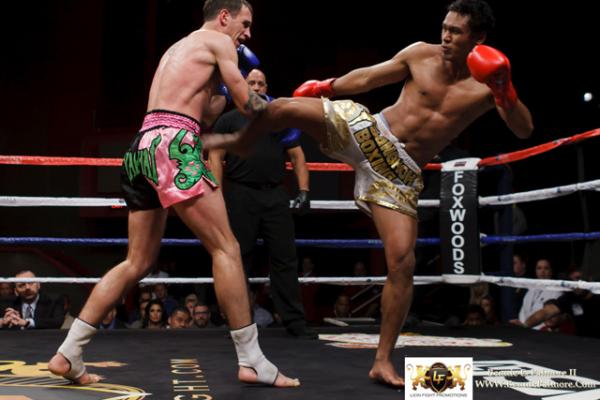 Originally scheduled to face Fabio Pinca, who was removed from the card at the 11th hour due to illness, Kearney (156 pounds at Thursday’s weigh-in) agreed to compete two divisions heavier at a catch-weight of 161 pounds. The discrepancy in natural weight showed.

Nattawut (52-10-2) picked his opponent apart with low kicks throughout the five-round bout. Kearney had no answer for the pace and strength of the Thai knockout artist, fighting by way of Atlanta.

Kearney moved to 29-10-1 with the loss. No official scores were announced, although Sherdog.com’s Mike Fridley and C.J. Tuttle unofficially saw the bout 50-45 and 49-46, respectively, for Nattawut. 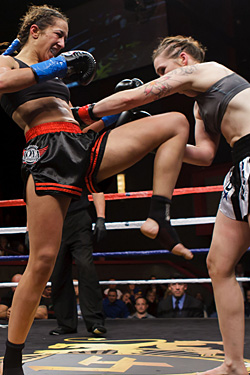 Although Sitzes appeared to have landed the more damaging blows throughout the contest and opened a nasty cut below the right eye with a beautiful spinning elbow, it was the consistent pace-setting of the Dutch fighter that caught two of the judges’ eyes. The official scores were 50-45, 48-47, 46-49.

Topic Takes Close one From Sasiprapa


Ognjen Topic (12-5) of Lodi, N.J., took a close, yet unanimous decision against Rungravee Sasiprapa (85-39-2). No scores were announced at the venue.

The 132-pound bout was a pleasure on the eyes as the technicians calculatedly measured blow for blow and did so with grace.

Neither fighter was able to score a knockdown or put the other in serious danger, but the judges sided with the taller, rangier fighter at the end.


Rungrat Sasiprapa put away a tough Pedro Gonzalez with a swath of violence that came to a close at 2:42 of round four.

Gonzalez, 2-1, and a veteran of over 15 professional mixed martial arts bouts, was overmatched with an aggressive output of technical prowess. The victim of an incidental clash of heads that was ruled an illegal headbutt by referee Thomas Sconzo and two legitimate knockdows, Gonzalez met his end when kicks and knees from Sasiprapa (51-24-1) collided with the midsection.


In a 145-pound contest, Chris Mauceri moved to 7-1 with an impressive display of athleticism against Coke Chunhawat (149-30-3). The verdict was unanimous decision. No scores were announced, but two Sherdog.com virtual scores saw the bout 50-45 and 49-46 for Mauceri.

Mauceri, a former member of the United States Junior National Gymnastics Team, simply was too fast and powerful for the veteran of more than 175 fights. Mauceri elevated his opponent into the air and onto the canvas with a flashy jump kick to the chest and had Chunhawat on the defensive all night.

Doherty slammed his opponent to the canvas from the clinch violently in rounds two and three, but it was not enough to overcome the amateur muay Thai experience of Pena. The 135-pound bout was the debut professional effort from each fighter.
« Previous Lion Fight 19 Results: Muay Thai Play-by-Play & Updates Next Video Highlights: Lion Fight 19 »