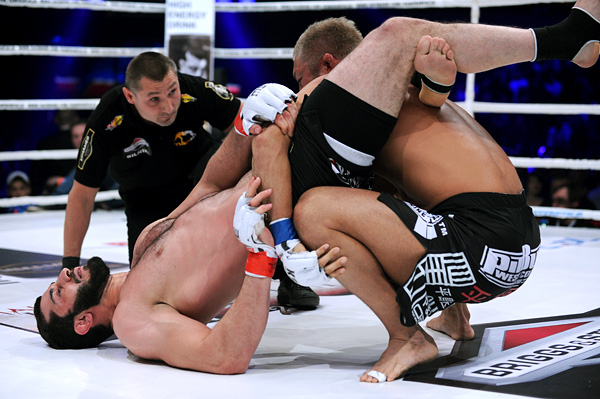 
Shortly after earning his eighth consecutive win in the KSW 25 headliner, Mamed Khalidov took a moment to apologize to those at in attendance for the abbreviated nature of his triumph.

The fans at Centennial Hall in Wroclaw, Poland, shouldn’t have been surprised. After all, Khalidov has been on a tear since a May 2010 draw with Ryuta Sakurai at KSW 13, finishing seven straight fights -- six inside of a round. On Saturday, the world-ranked Khalidov padded his resume and settled some unfinished business by making Sakurai victim No. 8 with a triangle choke in the opening round of their middleweight feature. As it stands, only one of the 33-year-old’s 28 career wins has seen the judges.

Khalidov (28-4-2) started quickly, launching himself at his Japanese foe with a flying knee. More knees to the legs and body in the clinch followed, and when the two combatants broke away, Khalidov attacked with aggressive punching combinations.

With a little less than four minutes remaining in the first round, Sakurai (24-18-6) landed a takedown. He would find no quarter on the mat, however. Khalidov immediately framed a potential triangle armbar, and when Sakurai attempted to power out of the hold, the longtime KSW veteran transitioned to a triangle choke. Shortly thereafter, Khalidov pulled his opponent forward and then rolled him over to secure the submission.

In the co-main event, Aslambek Saidov retained his KSW welterweight strap with a methodical unanimous verdict over Daniel Acacio. Judges’ scorecards were not revealed when the decision was announced.

Saidov controlled the opening frame with takedowns and moderate ground-and-pound. While Acacio didn’t absorb any major damage, he remained content to defend from his back. The final 10 minutes of the bout took place primarily on the feet. Acacio had his best moment late in the second period, when he landed a pair of solid right hands late in the round and forced the champ to shoot for a telegraphed takedown. 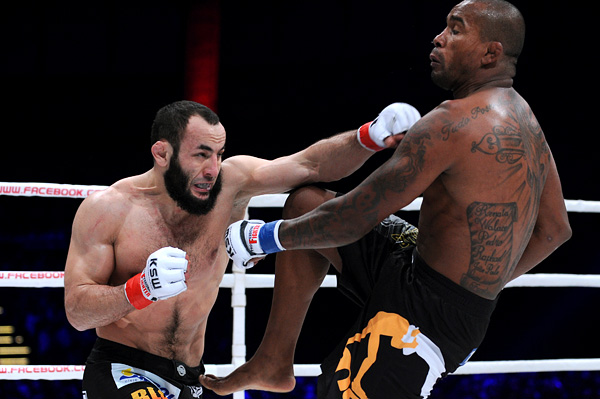 Photo: P. Pedziszewski/Sherdog.com
Saidov outpointed Acacio to move to 15-3.
Saidov (15-3) regained control during a deliberate third round. The Polish welterweight threatened with a rear-naked choke, and when the fight returned to the feet, got Acacio moving backward with a punching combination. Acacio (30-14) never mounted any serious offense before the final bell.

Earlier, Rafal Moks submitted Luiz Cado Simon with a guillotine choke 1:35 into the opening stanza of their welterweight encounter. It was the Pole’s eighth career triumph via tapout and third consecutive first-round guillotine stoppage.

Moks (9-6) wasted little time in rushing his Brazilian adversary. In the scramble that ensued, Moks threatened with a heel hook. Simon rolled repeatedly to escape the maneuver, but in the process left himself vulnerable to the guillotine. Moks capitalized on the opening, secured full guard and tightly cinched the choke, forcing Simon to ask out of the fight.

Abu Azaitar showed off his heavy hands in his KSW debut, stopping Krzysztof Kulak in the opening round of their middleweight fight. Azaitar improves to 8-2 as a professional, with seven of his triumphs coming by way of knockout. Kulak falls to 25-15-2.

Azaitar made his intentions clear from the beginning, as he stalked his Polish foe with heavy power punches. While more than a few hooks found their mark, it was a big overhand right that sent Kulak tumbling to the canvas. From there, the Cologne, Germany-based fighter swarmed with standing-to-ground punches. Kulak did his best to escape but was eventually unable to defend himself against his opponent’s relentless assault.

Virgil Zwicker needed just one punch to bring a swift end to his 210-pound catch-weight encounter with Mike Hayes. After Hayes whiffed on a massive overhand right, Zwicker capitalized with a short counter right hook, dropping the former Cage Warriors titlist to the canvas. “Rezdog” followed up two punches on the mat before the referee intervened 1:12 into the period.

It was the second win in a row for Zwicker (12-3), who also earned a first-round TKO over Nick Moghaddam at Bellator 99 in September. Hayes (19-8-1), meanwhile, has lost five of his last six fights. With the win, Zwicker is expected to receive a KSW light heavyweight title shot against Jan Blachowicz; the reigning 205-pound king was unable to defend his belt against Zwicker at KSW 25 due to injury.

Two-time UFC veteran Oli Thompson dominated his heavyweight showdown with Kamil Walus, winning via technical knockout 1:23 into the second round.

The British strongman set the tone for his victory early, as he picked Walus up and slammed him to the canvas 15 seconds into the bout. Thompson (13-5) remained on top for the duration of the frame, attacking with punches and hammerfists to the head and body. Thompson picked up the intensity of his ground-and-pound in the second frame. After taking Walus (4-2) down yet again, the ZT Fight Skool product went to work with a series of unanswered right hands -- each punctuated by a grunt -- which ultimately brought a halt to the contest.

Despite having a point deducted in the final frame, Piotr Strus took a majority decision from 51-fight veteran Matt Horwich in a middleweight affair that began the main card. Judges’ scorecards were not announced.

While the larger Horwich (28-22-1) attempted to control the bout through clinches and takedowns, the 25-year-old Strus (9-2) was able to create enough space to land effective straight punches on numerous occasions to get the nod from the cageside judges. Horwich, meanwhile, was not active enough when he did achieve top position.