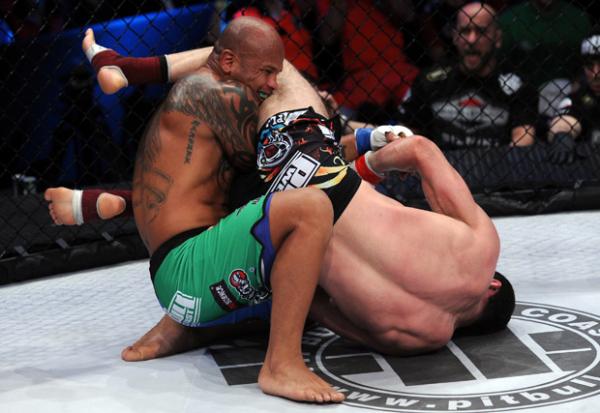 Whether it’s in a cage or ring, the results are consistent for Mamed Khalidov. | Piotr Pedziszewski/Sherdog.com


Maiquel Jose Falcao Goncalves tempted fate inside the dangerous guard of Mamed Khalidov for just a little too long.

Khalidov made the Brazilian pay, submitting “Big Rig” with a first-round armbar in KSW 27 headliner at the Ergo Arena in Gdansk, Poland on Saturday. Falcao officially asked out of the middleweight bout at the 4:53 mark of the initial stanza.

It was the ninth straight triumph for world-ranked Khalidov (29-4-2), with all but one of those victories coming inside of a round. A former Bellator MMA middleweight tournament finalist, Falcao drops to 32-6.

Fighting inside the confines of a cage for the first time since an EliteXC appearance in 2008, Khalidov had no issues working almost exclusively from his back. Falcao landed a takedown within the bout’s first minute, and while the Brazilian maintained top position for the majority of the round, he was largely conservative in his approach.

Khalidov, meanwhile, stayed active throughout, attempting to land upkicks when Falcao stood and narrowly missing an initial armbar when the Bellator veteran dove back into his guard. Khalidov would later explode to his feet and deliver an emphatic slam. When Falcao returned to top position following a scramble, it appeared he would be able to ride out the round. However, Khalidov swiftly transitioned to the armbar to secure the submission with just seven seconds remaining.

“He wanted to take me down, so I obliged to see what I could do on the ground,” Khalidov said through a translator.

While Pudzianowski (7-3, 1 NC) relied on takedowns and a heavy top game to control the second stanza, Thompson (12-7) appeared to get the better of his larger foe in the opening period, as “Pudzian” began to show signs of fatigue after about two minutes. In the event of a draw after two rounds, a third round would have determined the winner.

All signs pointed to an extra frame, so much so that Pudzianowksi’s corner brought out the stool to ready their fighter for another round. Much to the dismay of Thompson, the cageside judges determined that the Pole had done enough to get the victory in the originally allotted 10 minutes. 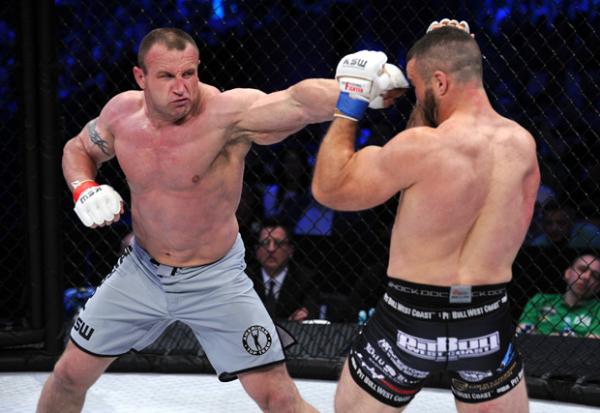 Photo: P. Pedziszewski/Sherdog.com
Pudzianowski eked out another close win.
Elsewhere, Borys Mankowski wrested the KSW welterweight strap from Aslambek Saidov, submitting the Chechen with a triangle choke at the 4:27 mark of round two. It was just the second loss in 13 appearances with the Polish promotion for Saidov.

“Not a lot of people believed in me, but I’d like to thank all the people that did,” said Mankowski, who previously lost to Saidov via TKO due to leg injury at KSW 21 in December 2012.


After a slow start, Saidov (15-4) appeared to be settling into a rhythm in the second frame, as he was able to get the better of the standup exchanges with his opponent. However, Saidov perhaps became a little too careless after landing his first takedown of the fight with about 1:30 to go. With Saidov attacking inside of his guard, Mankowski (15-5-1) was able to frame the triangle to elicit the tapout.

Karolina Kowalkiewicz retained her KSW women’s strawweight crown with a first-round submission of Jasminka Cive. The 28-year-old Pole brought an end to the contest with an armbar 3:53 into the opening stanza.

The champion wasted little time diving into her opponent’s guard. From there, Kowalkiewicz (5-0) deftly advanced to side control before taking full mount. The Gracie Barra Lodz representative then took Cive’s back, attempting to soften her foe up with punches in order to create an opening for a rear-naked choke. Kowalkiewicz was eventually able to secure a body triangle and slide her left arm under the Austrian’s neck. Cive (5-2) valiantly fought off that submission but was unable to defend Kowalkiewicz’s subsequent transition to the fight-ending armbar.

Piotr Strus and Abu Azaitar battled to a majority draw in a middleweight showdown. Strus largely (9-3-1) neutralized the power punching of Azaitar (9-2-1), who had won four straight via technical knockout. The Germany-based Moroccan was aggressive with punching combinations and knees to the midsection in round one but faded after that. Meanwhile, Strus’ most significant offense came in the form of leg kicks and clinch work, but neither fighter ultimately did enough to distinguish himself.

Earlier, Mateusz Gamrot (6-0) relied on top control and ground-and-pound to capture a unanimous decision against Jefferson George (4-3), who lost 30 percent of his purse for failing to make the contracted lightweight limit, and Tomasz Narkun (9-1) forced a tapout from Charles Andrade (27-19) with a kneebar at the 1:02 mark of round one in a light heavyweight tilt.

Two preliminary bouts kicked off the card: Rafal Blachuta (9-3) submitted Patrick Vallee (10-7-1) with a scarf-hold armlock 3:15 into round two in a welterweight clash; and Lukasz Chlewicki (12-3-1) outpointed Lukasz Rajewski (2-1) at lightweight.