The first round began tentatively, as the duo jostled for position within the clinch before Manuwa managed to sweep Blythe, landing in half guard. From there, the champion managed to land sporadic strikes on the durable Blythe, who defended well and saw out the round in the relative comfort of full guard.

Manuwa was the aggressor in the second round. Holding the center of the cage, he connected with a combination of powerful rights that shook Blythe into closing the distance and securing a takedown. After a period of ineffectual groundwork, the fight returned to the feet, where Manuwa delivered a looping left hook that shuddered Blythe’s jaw and left him crumpled and unconscious against the cage at 4:22.

The win sees “Poster Boy” Manuwa move to 6-0, and increases his reputation as one of the most promising young fighters in Britain.

The fight began at an exhaustingly high tempo, which suggested an early finish would be likely. The pair exchanged takedowns, sweeps and scrambles, before an opportunistic Pickett sank in the deep guillotine on his opponent as they struggled for position on the ground.

Hearn, who arrived on a crucifix wearing a mask from the movie “Scream” as a medley of “Fight Club” quotes and “Thriller” filled the arena, was caught by Shaun Lomas with a standing guillotine choke at 3:42 of the first round. Hearn’s record drops to 2-2. 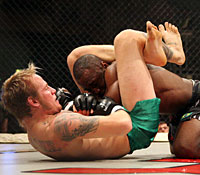 However, the fight of the night came from heavyweights Ian Hawkins and Ashley Pollard. A minute-long session of wild, static brawling saw both men bloodied and exhausted, with Pollard earning the technical knockout via strikes at 3:10.

The intended headlining fight between heavyweight champion Neil Grove and Markus Hipp failed to materialize after the German challenger was said to have collapsed backstage just hours before the bout was scheduled to begin.

A clearly frustrated Grove was consoled with the news that he will get a chance to defend his title on Oct. 24, against aggrieved Kimbo Slice victim, James Thompson.