TOKYO -- Just across the street from the Ariake Coliseum, where the K-1 World Grand Prix 2010 Final was taking place, Deep hosted their final card of the calendar year with “51 Impact” at Differ Ariake.

In the main event, former lightweight title contender Koichiro Matsumoto continued his featherweight campaign by putting a late stop to Pancrase veteran Shoji Maruyama. Despite having a reputation for being a knockout artist, Maruyama was not at his best Saturday evening. Matsumoto exploited Maruyama’s porous defense with sharp jabs and right hands; almost every punch Matsumoto threw found its mark on Maruyama’s face.

It was only a matter of time until the accumulated damage would begin to show. A big right hook opened a small cut at the corner of Maruyama’s left eye in the third frame, and while it did not stop the fight, it was a sign of things to come. Matsumoto flurried shortly thereafter, landing consecutive hard right hands to Maruyama’s temple, dropping him against the ropes and sending his mouthpiece flying.

Erring on the side of caution, referee Yoshinori Umeki stepped in to call the bout at 1:49 of the third period. The stoppage appeared to be premature, however, as a bewildered Maruyama immediately protested with arms raised. Unfortunately, it was not Umeki’s only questionable stoppage of the evening. 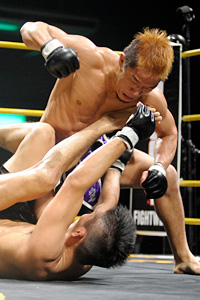 P. Benjamin
Otsuka (top) vs. Hori.
Former Deep featherweight champ Takafumi Otsuka notched another decision win in the co-main event, this time over Tomohiko Hori. Otsuka dominated positionally in the first and second periods, securing takedowns to steal mount and back-mount. He did little damage, however, throwing only a handful of punches in both periods. Hori came alive in the third, kicking the dogged wrestler away, but it would prove too little, too late.

While dominant on judges Kenichi Serizawa, Tomoki Matsumiya, and Umeki’s scorecards, Otsuka again showed an inability to finish, or even come close to putting an opponent away.

In the fight of the night, Dream veteran Daisuke Nakamura had the big-punching Toshikazu Iseno outmatched in all areas, landing cleaner punches and low kicks throughout the first period. Lip bloodied and showing signs of a wobbly lead leg, it was clear in the second round that “Ise” was wearing down, increasing Nakamura’s chances to land one of his trademark lightning-quick submissions.

Nakamura didn't keep the crowd waiting for long, as he leapt into a flying armbar just under two minutes into the second frame. With Nakamura having threatened to break his opponent’s limb if Iseno’s pride prevented him from submitting, “Ise” promptly tapped out at the 1:54 mark rather than risk a horribly odd-angled arm.

Active-duty police officer Hideki “Shrek” Sekine played it safe in the first frame of his heavyweight bout with Seigo Mizuguchi, slamming low kicks into the Deep megaton’s lead leg. A more comfortable Sekine continued the assault in the second period, adding big hooks to the equation. Though Mizuguchi did his best to play the tough guy, “Shrek’s” power eventually won out when Sekine cornered him under a barrage of punches. As soon as Mizuguchi turned away, referee Serizawa stepped in to stop the bout at the 2:38 mark.

In a surprise upset, Yoshitomo Watanabe clobbered former Deep welterweight champion Hidehiko Hasegawa. Coming in two pounds over the weight limit, Hasegawa was given two yellow cards to start the bout. His troubles didn’t end there, as Watanabe aggressively stalked on the feet, finally connecting with a stinging short right hook that made Hasegawa’s legs wobbly. Smelling blood, Watanabe lunged with more punches and did not stop until referee Serizawa had seen enough, calling the stop at 2:48 of round one. 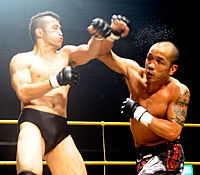 P. Benjamin
Nakamura (left) vs. Iseno.
After the bout, Watanabe called out Shigetoshi Iwase in a bid to determine the number-one contender to challenge divisional kingpin Yuya Shirai.

Rings veteran Hiromitsu Kanehara exercised a tactical game, staying just out of distance of Hiroki Sato’s punches to land resounding kicks to the legs and body. It wasn’t until the final ten seconds that Kanehara landed a hard punch to Sato’s chin, sending him careening into the ropes. Kanehara moved to finish with more punches, but the bell sounded shortly after. Judges Samio Kimura, Koichi Takemura, and Serizawa thus gave the J-MMA elder statesman the unanimous decision victory.

SRC Gold Cup runner-up Takeshi Numajiri shot relentlessly for takedowns in his bout with Tatsumitsu Wada, eating all manner of punches and knees before finally taking the fight to the floor. Despite Numajiri’s ability to bring the fight down, the scrappy Wada was difficult to pin. A mid-round flurry from Wada paid off, sending a dazed Numajiri into the ropes. Though Numajiri scrambled for Wada’s legs, referee Umeki jumped in for another premature stoppage at 2:43 of the second, much to the displeasure of the wrestling stalwart.

Yasuaki Kishimoto locked a triangle choke on Kosuto Umeda which brought their lightweight contest to an awkward and scary halt. Umeda dove right into the choke and, after some readjustment by Kishimoto, went to sleep. It took five to seven seconds before referee Matsumiya realized that Umeda was completely limp, finally separating the fighters at the 90-second mark after Kishimoto notified him that Umeda was unconscious.

Interestingly, Umeda was the second fighter of the evening cornered by Dream lightweight champion Shinya Aoki to lose by submission. Despite having Aoki as an audible chief corner, Shunsuke Tanaka could not stop the lightning quick guillotine which Makoto Kamaya locked on, forcing the tap at 3:35 of the first round.

Elsewhere, featherweight Tomoya Kato leveled Isamu Sugiuchi after catching an opening kick to the body. With Sugiuchi’s foot in hand, Kato railed his opponent with two sharp rights to the face. Sugiuchi fell to the mat face-first and dazedly reached for Kato’s legs, but referee Umeki was quick to jump in and call the stop after only 22 seconds.

Yuta Watanabe appeared to have Yusaku Tsukumo’s number on the feet, but “99” was able to control and land more offense on the ground. Although Watanabe took Tsukumo’s back at the end of round two, judges Kimura and Umeki both sided with Tsukumo in the end, with judge Matsumiya ruling the bout a draw.

Henrique Shigemoto stunned into silence a heavily pro-Nobuo Odakura crowd by teeing off on Odakura before leaving him a dazed heap in the corner, prompting referee Kimura to dive in for the save at 1:31 of the first period.

With the aid of crisp, head-whipping punches and whirlwind hip throws, Yasuhiro Kawasaki bullied Yuki Ito on the feet and rag-dolled him to the floor. After two rounds of this, judges Matsumiya, Serizawa, and Kimura gave Kawasaki the unanimous decision victory.

Despite a powerbomb from Juri Ohashi during a Sadao Kondo triangle attempt, Kondo walked away the unanimous decision winner in their back-and-forth battle, landing the sharper punches and being generally more threatening in the grappling department.

Katsunori Tsuda showed excellent control on the feet, sneaking behind to steal Yusuke Kagiyama’s back repeatedly in between bursts of blistering punches. Thus, judges Kimura, Serizawa, and Umeki gave Tsuda the unanimous nod after two rounds.

Kicking off the evening, Hiroyuki Kobayashi and Yuki Uejima fought to a majority draw, despite Kobayashi getting a head kick knockdown late in the second round.