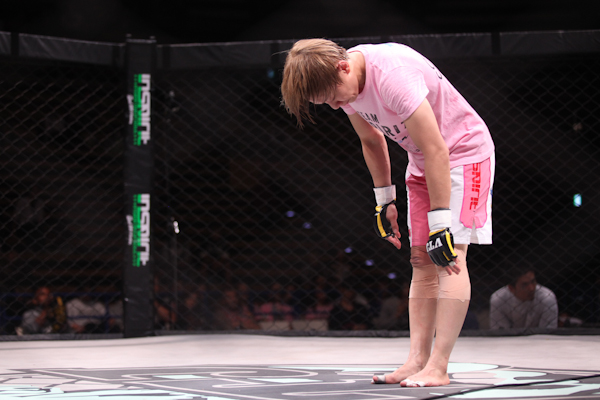 
TOKYO -- After a nine-year, 29-fight career, MMA pioneer Megumi Fujii’s retirement bout against American Jessica Aguilar ended on a bit of sour note, as Fujii was unable to answer the call for round three due to damage suffered from an accidental eye poke. The rematch with Aguilar served as the main event for Vale Tudo Japan 3rd , which featured a number of “Japan vs. USA” themed bouts at the Ota City General Gymnasium.

The main event started out close, with both women searching for their rhythm between boxing exchanges. About two minutes into the round, Fujii received her second eye-poke of the frame, as Aguilar’s nailed scratched the corner of Fujii’s eyelid. Fujii seemed unable to continue at first, but after about a 10-minute rest period, chose to go on. The damage in her eye began to show, as Aguilar made use of the opportunity and began to find her target easier and easier.

After receiving a multitude of punches, Fujii’s eye began to swell even more and her defensive skills faltered. At the end of round two, the doctor was called in to check the damaged eye and decided he couldn’t let the fight continue. While the bout would have been declared a no contest originally, it was called a TKO victory for Aguilar because Fujii chose to finish out the two rounds before stopping the fight. Post-fight, the American Top Team product expressed her gratitude to the legendary Japanese fighter, as the two embraced each other in tears.

In her retirement speech, Fujii thanked her supporters in the crowd.

“Fighting isn’t easy, but I’m able to do it with a smile on my face, because of all the fans and because of my teammates and friends,” she said. Widely regarded as the best female fighter to compete in the sport of MMA, Fujii ends her career with a record of 26-3. 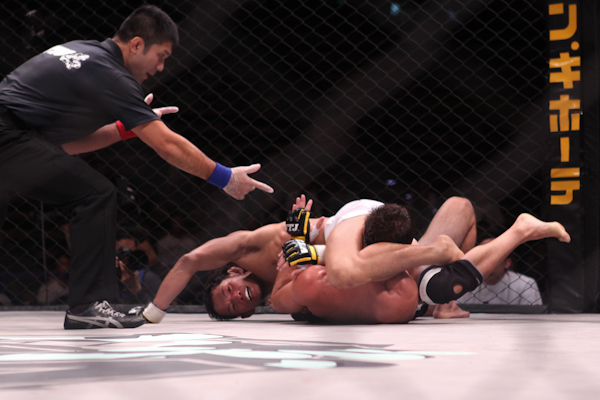 Photo: D. Marchand/Sherdog.com
Uno tapped out his second Team Alpha
Male prospect in four months.
In a bit of a come-from-behind win, Japanese veteran Caol Uno fought through some rough patches early on before submitting Team Alpha Male’s Daniel Romero with a slick inverted triangle choke from side control.

Uno started off on the wrong foot, as an early rush backfired and landed him against cage, eating punches from Romero. After a receiving a series of dangerous knockdowns, Uno began to find his rhythm with takedowns before the end of round one. In round two, Uno showcased his veteran experience over the worn-out American, taking him down and methodically passing to the mount.

Romero bucked Uno into side control, where the Japanese fighter quickly wrapped up an inverted triangle choke, forcing Romero to tap at the 2:23 mark. The victory earned Uno the event’s MVP award and improved his record to 29-16-5.

As expected, Hideo Tokoro used his signature speed and aggression to put on an incredible back-and-forth spectacle with Will Campuzano in the evening’s first of three “Japan vs. USA” matchups. The bout saw both men earn takedowns, knockdowns, back takes and come to close to locking up submissions on multiple occasions. After a razor-close three rounds, the judges scored in favor of Campuzano with two 29-28 scorecards, while one judge went 29-28 for Tokoro. The split decision ushered boos from the pro-Tokoro crowd, as the former janitor’s own gym is only minutes from the venue. 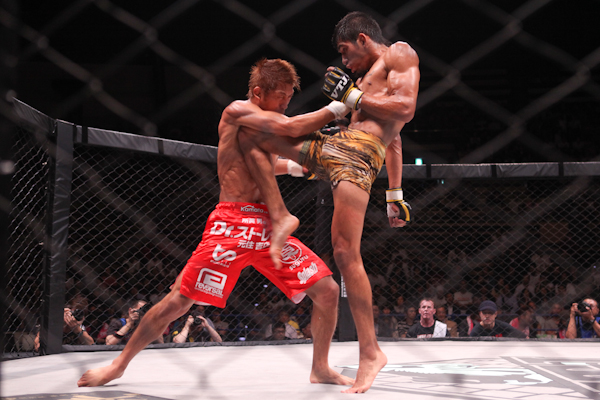 Young bantamweight prospect Yuta Sasaki added another win to his busy year, finishing Korea’s Geun Do Park with a rear-naked choke only 1:36 into the first round. The win makes four this year for “Uruka,” extending his current unbeaten streak to eight.

ZST mainstay and former UFC fighter Naoyuki Kotani needed little effort to overpower fellow lightweight Daisuke Hoshino, scoring a takedown early and finishing the fight with an armbar at 3:57 of round one.

In the opening fights for the evening, 17 year-old AACC prospect Ryuto Sawada wrestled his way to a unanimous decision win over Hiroyuki Takahashi at strawweight, bantamweight Seiichiro Ito finished Taku Kajikawa with an armbar only 1:34 into round one, and Taiyo Hayashi pounded out Yuji Kurogane at 2:18 of the second round for a TKO finish.