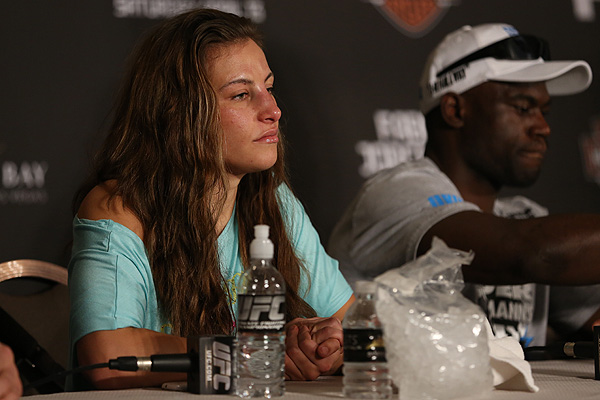 Miesha Tate has stepped in for the injured Cat Zingano and will now coach opposite Ronda Rousey on Season 18 of “The Ultimate Fighter.”

Rousey and the rest of the cast were informed on the switch Tuesday as the show began taping, when Tate showed up instead of Zingano. “TUF 18” premieres Wednesday, Sept. 4, on Fox Sports 1, and Rousey will defend her UFC bantamweight title against Tate after the show wraps.

“Everyone said an ‘Ultimate Fighter’ between me and Miesha would be the best,” Rousey stated in the UFC’s official release. “For some reason, I think me and Miesha are intertwined in fate like [Muhammad] Ali and [Joe] Frazier.”

Zingano earned her spot as a coach on “TUF 18” by stopping Tate last month at the “TUF 17” finale, weathering significant early offense from the former Strikeforce 135-pound queen before securing a third-round technical knockout. Unbeaten through eight professional outings, the 30-year-old has earned seven of her eight victories by way of either knockout or submission and has not allowed a fight to go the distance since January 2010.

Tate, 26, was booked to face former title challenger Liz Carmouche at UFC on Fox 8 before accepting her new role on “TUF 18.” It is currently unknown if Carmouche will remain on the July 27 bill against a new opponent. Prior to her loss to Zingano, Tate had won seven of her previous eight bouts, capturing the Strikeforce title from Marloes Coenen just under two years ago before relinquishing the belt to Rousey in March 2012.