A freestyle wrestling bronze medalist at the 1996 Olympic Games, Vila immediately shot on McKenzie and slammed him to the mat. The 39-year-old Vila looked for a quick end to the fight with ground-and-pound, but McKenzie tried for an armbar of his own from the bottom. The Cuban had other plans, viciously kneeing McKenzie’s ribs on the floor and taking the wind out of his sails.

With the crowd chanting “Cuba, Cuba,” Vila fed off the audience in the second frame, connecting with a right hand followed by a powerful takedown on McKenzie. The hammer fists of “The Exorcist” forced McKenzie to turtle up, absorbing punches until the bout was halted at the 3:26 mark.

“I hope with this victory I proved again that I am a top contender,” Vila told Sherdog.com after the bout. “He had a strategy, as he attempted to box, wrestle and submit me, but I escaped. I knew everything that was coming and I knew how to defend myself.” 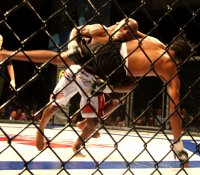 S. Messina
Vila's world-class wrestling was
too much for McKenzie.
With the win, Vila moved his record to 9-0.

“I am just hoping the UFC calls me so I can demonstrate I can be a champion,” said the elated 125-pound standout.

Harris started fast, immediately landing several hard strikes that sent Papp stumbling to the canvas. A bloody Papp made every effort possible to survive. However, when Papp got to his feet, he was met with another overwhelming barrage of punches that forced the stoppage less than a minute into the fight.

“Someone is going to sleep,” said Harris, calling out his would-be opponent, who was not in attendance.

“I do this for everyone that believes in me,” he added. “I am humbled to be in a position to perform for the people in Miami.” 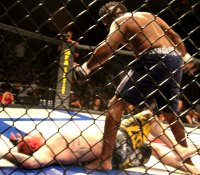 S. Messina
'Da Da 5000' knocked out Papp,
then called out Kimbo Slice.
The fighters tested one another’s striking quickly, and Rio landed the first blow with a right hand. Seconds later, Rio again nailed Bynum with another stinging right hand. Immediately, Rio took advantage, pinning his foe against the cage. Bynum was stuck on his knees, eating blow after blow until the bout was called, sending Rio into the bleachers to celebrate with hugs and kisses from the fans.

Lightweight crowd favorite Joey Rodriguez knocked out John Cicio Jr. 2:37 into the first round. Rodriguez dropped Cicio with a vicious head kick, and followed with punches to force the stoppage.

Miami's Josh Mercado defeated Oklahoma City’s Ryan Hayes, forcing him to tap out to a brabo choke at 4:01 of the third round.

Jose “The Fresh Prince” Caceres remained undefeated after forcing Fred Lanna top tap to an arm-triangle choke at 1:59 of the third frame.

Denis Hernandez armbarred Gabriel Verona at 2:58 of the first round of their lightweight contest, leading to a dancing show from Hernandez in the post-fight.