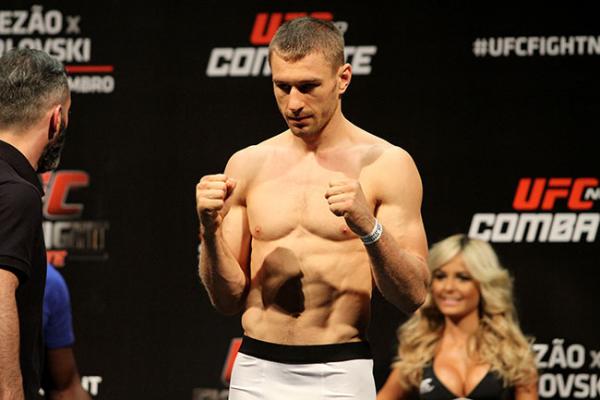 
Ultimate Fighting Championship lightweight Piotr Hallmann has been suspended for nine months by the Brazilian MMA Athletic Commission (CABMMA) after testing positive for the steroid drostanolone.

CABMMA oversaw drug testing for UFC Fight Night “Bigfoot vs. Arlovski 2,” the Sept. 13 event in Brasilia, Brazil, at which Hallmann lost via split decsion to Gleison Tibau in the “Fight of the Night.” According to a Monday release from the commission, all 22 fighters on the card were tested for “anabolic agents, diuretics/masking agents, stimulants and cannabinoids,” while four athletes were randomly tested for levels of erythropoietin (EPO) and human growth hormone (HGH).

“The athlete Piotr [Hallmann] tested positive for the presence of the anabolic steroid drostanolone,” CABMMA stated. “He will be suspended for nine months, retroactive to the date of the fight. In order to regain a professional fighter’s license with CABMMA, the athlete will need to pass new anti-doping control tests.”

CABMMA added that all of its drug tests are processed by laboratories accredited by the World Anti-Doping Agency (WADA).

Hallmann, 27, has recorded a 2-2 record since joining the UFC in September 2013. The Polish grappler made his Octagon debut in Brazil, where he submitted Francisco Trinaldo via kimura.

The UFC has yet to issue a statement regarding Hallmann’s suspension.